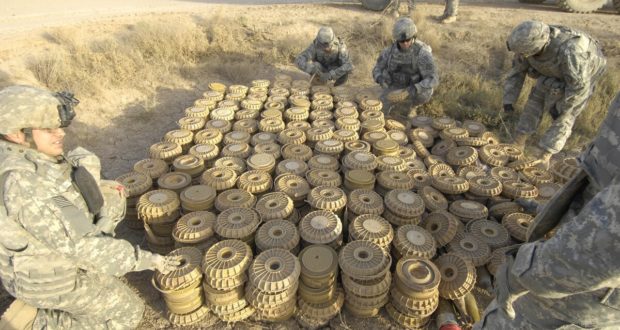 Part I: The Ottawa Convention and Landmines

The Ottawa Convention, more formally known as the Convention on the Prohibition of the Use, Stockpiling, Production, and Transfer of Anti-Personnel Mines and on their Destruction, and more commonly known as the Mine Ban Treaty, entered into force on 1 March 1999 with the purpose of banning the use of anti-personnel mines. Some 164 states have ratified the treaty while 34 have not, with some of the latter abiding by it regardless.

Among the non-signatories are the world’s major powers: The United States of America, the Russian Federation and the People’s Republic of China. In 2014 however, President Obama’s administration announced it would change the United States’ policy on landmines by banning their use and begin the path on accession to the Ottawa Convention.

Landmines have been used by countries across the globe as defensive weapons by creating obstacles and canalizing an enemy into an area where the defending force can lay in wait for a confrontation on their terms. Produced in both anti-personnel (AP) and anti-tank (AT) variants, landmines can also serve to delay an enemy advance, as a force on the move would have to detect and remove them first. What they cannot be, however, is easily demobilized after a conflict has ended, resulting in war-time minefields turning into peace-time minefields.

It is believed that there are about 110 million active landmines in the ground around the world today, with the United Nations estimating that some 5,000 people are either killed or maimed annually with an additional 15-20,000 injuries. The 2019 Landmine Monitor specified this at 20 deaths a day in 2018. While soldiers can be demobilized and sent home after a conflict, landmines remain active, as they do not obey peace agreements or ceasefires. This results in the deprivation of land that could otherwise be used for agriculture or infrastructure, impeding development even after a peace process has begun and creating refugees and internally displaced peoples (IDPs). About 61 countries remain contaminated with landmines, and despite international efforts to ban their use, recent conflicts in Libya and Syria, for example, saw their renewed use.

Part II: The US’ s reversal on its landmine policy

33 states remain outside the Mine Ban Treaty. Collectively they keep a stockpile of about 50 million landmines with the largest of these being in China, India, Pakistan, Russia, and the United States, with further nations, such as Myanmar and South Korea, continuing to produce them.

In September 2014, the United States announced it would comply with the Ottawa declaration everywhere, except on the Korean Peninsula, and no longer use anti-personnel landmines while beginning to destroy its stockpile of about 3 million, to “ultimately comply and fully accede to the Ottawa Convention.”

While the 2014 change in policy came with much praise, the 2020 reversal drew just as much criticism. However, this reversal does not permit for the casual deployment of mines and warrants closer inspection along with the accompanying criticism of the justification behind the policy change. The change itself came as a result of a review to the US’ defense strategy focusing on “great power competition” with Russia and China, both countries which have no limits on landmine usage, and where mines could act as “force multipliers,” useful when dealing with a numerically superior foe.

A differentiation is made between so-called “non-persistent” or “dumb” mines, and “persistent” or “smart” mines, the difference being the former are those laying around the world, active indefinitely, while the latter have the ability to deactivate or self-destruct after a certain period of time. The change in policy only applies to the latter while the former remain under prohibition. The approval of use has also been purposely set to the highest levels of the Pentagon, and the secretary of defense must personally approve each deployment. In cases of unconventional warfare, these mines could also protect military bases from terror groups by securing military installations.

The Trump administration’s reversal to the policy would permit only advanced, persistent/smart mines, which they claim are designed to “reduce harm to civilians and partner forces.” It also requires all mines to self-destruct in within 30 days (the time can be set with some mines allegedly remaining active for as little as two hours) and contain a backup, self-deactivation feature.

It is unlikely the change in policy will be implemented. The United States also continues to support anti-landmine efforts and is the greatest financial contributor in this regard, having done more than many countries which have signed the Mine Ban Treaty.

Domestically, President Trump’s administration has drawn criticism across the political spectrum, as the decision overturned 30 years of bi-partisan progress towards fully banning landmines. And despite advances in mine technology and US efforts in de-mining activities, landmines, by their very nature, fail the discrimination and proportionality test of international humanitarian law. Human rights groups point out that while smart mines may be safer than dumb mines, they are not safe at all, nor are their deactivation mechanisms 100% reliable, to which proponents point out that the chance of a self-destruct/deactivation failure is said to be six in one million.

In addition, the large amount of mines deployed at once by aircraft can be more dangerous than dumb, human-laid mines, as there is no way to accurately mark or map them (despite GPS technology being implemented in new designs for locating and remote detonation), and fields may be re-mined multiple times if needed due to deactivation, resulting in multiple amounts of mines than if non-persistent mines were used. Even a deactivated mine will have to be de-mined as any other due to a lack of awareness on the status of it, resulting in longer de-mining periods and active mines staying in the ground longer. This also results in an exponentially higher price, as it costs between USD 300 and 1,000 to remove one mine, while one can be built for between USD 3 and 30.

The deployment of mines by the United States presents challenges regarding its allies in the field as well, as all other NATO countries and US partners such as Afghanistan, Iraq, Ukraine, and Japan, are all parties to the Mine Ban Treaty. This creates an operational dilemma in the field in case of a coalition mission with countries who have banned their use completely.

While this change in policy does not necessarily mean a change in practice, anti-personnel mines remain defined as mines “designed to be exploded by the presence, proximity or contact of a person and that will incapacitate, injure or kill one or more persons.”

The majority of landmine victims around the world are children playing and people gathering firewood, and as previously mentioned, the perpetual threat of mines prevent usage of land for agriculture, infrastructure and overall development. As explained above, this does not change with “persistent” or “smart” mines. Unaware people can be killed or maimed, as is the function of a mine, making their use immoral.

Landmines, no matter how advanced they may seem, prevent a peoples or a country from developing by denying them the ability to move on from an armed conflict. They act as physical barriers to economic growth, and political and societal progress, and remain as psychological reminders of a conflict and of the dangers that remain hidden in their lands. In doing so, landmines do not just present a threat to state security, but to human security as well, as it is not just a country or a faction which will remain targeted indefinitely, but the individual human being as well.

2020-03-26
Oliver Hegglin
Previous: Kaliningrad: Russia’s Province in the Heart of Europe
Next: Pandemic animal cruelty and viral evolution in COVID-19