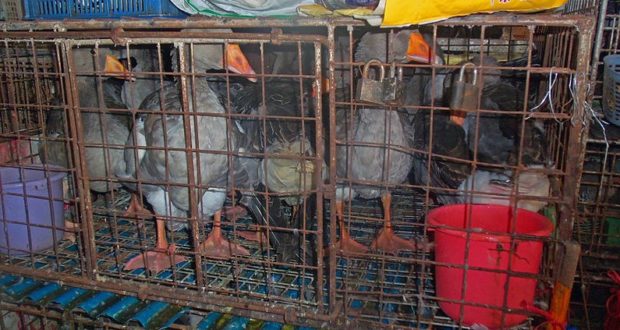 Zoonotic illnesses are the most common cause of new infectious diseases and all of them by definition arise from animals. According to the CDC, three out of every four of the novel viruses we encounter will emerge from animals, and how we interact with animals has a lot to do with the rapid rise in these viruses. The commodification of animals and a chronic mishandling of them has a hidden price, one that cannot be afforded for the sake of convenience.

Animal cruelty is common worldwide, but where human rights violations are so common, animal rights rarely prompt much needed discourse. The great experiment of mankind’s stranglehold of mother nature’s resources is getting pushback as the number and momentum of deadly infections are born at unprecedented levels, such that over a thousand epidemics were managed by the World Health Organization in the last decade alone. Unregulated meat markets and industrial animal farming create unhealthy unnatural environments that pose a security risk for all. Overcrowding, unsanitary conditions, bizarre animal feed, and forced interspecies cohabitation, create conditions that catalyze the formation of novel diseases. When these conditions are combined with similarly overcrowded and unsanitary human living conditions, we see both the rapid creation and spread of novel zoonotic viruses, like the COVID-19 pandemic seen today.

The rise in epidemics is not news, as the United Nations and the World Health Organization coordinated to produce research demonstrating gaps in financing and issues with prevention or emergency preparedness. An “apocalyptic pandemic” was predicted by Pulitzer Prize winning author, Laurie Garrett, in September 2019, months before COVID-19 emerged, but she noted that no one was preparing for it. Infamous zoonotic illnesses of the 20th and 21st century include the 1918 flu, Ebola, swine flu, avian flu, SARS, Creutzfeldt-Jakob Disease, and now COVID-19. However, these famous pathogens are just the tip of the iceberg, where thousands of new illnesses remain undetected in animal hosts and lay in wait for prime conditions to infect human hosts. The worst risks are manmade, created in our abusive relationship with the animal kingdom.

Historically, pandemics have higher casualties than war, yet budgets for prevention of disease or even research into emergence never reaches a tenth of that dedicated for military defense. The 1918 flu alone killed more people than the combined death toll of World War I, but sentiment of pandemics as security threats are unrealistically optimistic. Despite the repercussions of emergence, prevention of novel threats lacks the same tactical and coordinated efforts that containment is given after epidemic is widespread, even as the World Health Organization finds prevention to be cost effective at roughly $1-2 USD per person. Every time a new infection is born, governments respond with surprise at each new threat, often acting too late to contain them. Yet, an undiscussed source of these infections, animal cruelty, has been on the rise as large-scale industrial animal farming increases to meet growing worldwide meat consumption.

Until 1996 in the United Kingdom, cattle were fed meat and bone meal as an amino acid supplement to their feed. Some groups pushed for an end to the practice which they touted as tantamount to forced cannibalism in an animal that is vegetarian. In this instance sick cattle were fed to healthy cows and gave rise to bovine spongiform encephalopathy, or mad cow disease. This bizarre practice with animal farming allowed prions to be transmitted between cattle, giving rise to Creutzfeldt-Jakob disease, a fatal neurodegenerative disease in humans with no cure. Although research on prions existed decades prior to their transmission to humans, it was the unnatural conditions invented within the industry that introduced prions to the human population, where it continues to affect hundreds of people a year.

Likewise, dangerous animal husbandry practices that house multiple species in close quarters are prime conditions for creating novel zoonotic viruses, like COVID-19. Normally, viruses replicate nearly exact copies of themselves through their hosts, but they are capable of evolving. When a host is infected with two different pathogens, viruses can exchange genetic material via reassortment or recombination to quickly generate a novel virus, the progeny of the originals. Luckily, most viruses are species-specific and unable to transmit to human hosts, but deadly viruses in animals may be a few genetic changes away from becoming the next pandemic.

The evolution of viruses increases when host exposure is high and susceptibility increases. Densely packed cages that are stacked over one another enable excrement and respiratory secretions to readily pass between animals. Forced proximity from overcrowding or stacking cages increase the probability of coinfections within each animal host. Markets like the one in Wuhan are a ticking time bomb for viral emergence, as chickens, dogs, bats, cobras and kraits are packed within a sneeze zone of one another.

It is important to respect that animals are not inanimate objects-they are dynamic and respond and change to their environments. Vertebrates, or animals with spines, share key similarities with humans, enough to be sickened by the same illnesses. Vertebrates have immune systems that are compromised under stressful living conditions and meta-analysis shows that these animals suffer from increased glucocorticoid levels from stress that weaken their immune systems and reduce their resilience to diseases, just like humans. Comfortable animals in sanitary conditions have robust immune systems, and they are less likely to contract illnesses that can then be transmitted to humans. In fact, many social animals self-isolate when they are deathly ill, a behavior that protects their communities from contracting illness, an option that does not exist in crowded markets. Likewise, unregulated meat markets often butcher animals in proximity to where they are housed which both reduces the sanitation of the meat and the well-being of the still living animals, that likely understand the existential threat ahead.

Preventing the conditions which permit novel zoonotic viruses is key, as containment of novel viruses is logistically improbable once they have emerged. The problem with any new pathogen is that new pathogens create the same symptoms and presentation as established pathogens. Doctors cannot differentiate COVID-19 from the flu without specialized testing, but that testing didn’t develop until after epidemics have taken their toll. Even in wealthy developed countries, viral illnesses are not routinely screened to differentiate one virus from another, as the treatment are often the same. Once the investigation starts to identify that something new has developed, it is generally already too late to contain it.

New viruses are most deadly to a population because initially almost no one is immune. When someone is ill with an established virus, it is often mitigated by the resistance of the members of the population whom have already encountered that virus at some other time in their lives. Those whom have already encountered the virus are resistant, offering a buffering effect to other susceptible people and reducing the transmission rates of the illness. Likewise, some regions may even have “herd immunity”, where a virus is unable to spread because the infected individual is too far removed from anyone still susceptible, and the susceptible are protected by a resistant population they live within.

An example of herd immunity and the problems with novel pathogens can be seen in the introduction of smallpox to the Native American populations in the 18th century. Smallpox was once a novel zoonotic virus introduced to Eurasia through generations of livestock cultivation. Native Americans had virtually no history of livestock cultivation and were never exposed to the virus until it was introduced by European colonists. Nearly all the natives were susceptible to the virus and fell ill, spreading it rapidly through social contact. Experts estimate that within a few generations, smallpox killed nearly 95% of the Native American population.

It is the novel nature of emerging viruses that makes them so deadly, so it is reasonable to explore and mitigate the source of emergence by drastically changing policy on acceptable animal husbandry. Primary prevention, or the prevention of disease, is the best defense for novel zoonotic viruses. The deplorable conditions that give rise to the creation and spread of zoonotic illnesses need to be investigated and mitigated, as the cost of policy changes is essentially free while the cost of pandemics is incalculable. Animal cruelty was once believed to be an ethical concern, but it would be ill-advised to turn a blind eye to the glaring impact that animal abuse has on human lives and the economy. Unless humanity learns its lesson from COVID-19, it is only a matter of time before the next deadly pandemic.

2020-03-29
Kim Miner
Previous: The Human Security implications of the United States’ reversal of its landmine policy
Next: Lockdowns, disinformation and telling signals: Lessons from the Western Balkans’ response to COVID-19

Associate Fellow Kimberly L. Miner is a hospitalist on a COVID-19 team in Massachusetts. She has prescribed medicine for both primary care and hospitalized patients. Her research interests include population health, infectious disease, and preventive care. Previously, Miner worked in pediatrics in the Boston area. Her experiences include primary care, step-down ICUs, long term acute care facilities, and she volunteered in sports medicine for the US Olympic Judo Team. She has dedicated years of her life to the rehabilitation of persons with disabilities and special needs. Miner is a graduate of the University of Virginia with several years of experience in lab and academic research.