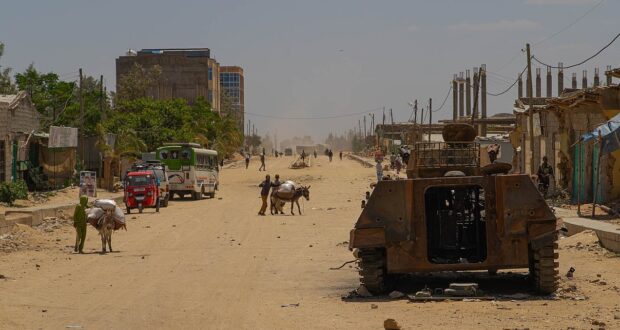 Prior to the election of Prime Minister Abiy Ahmed in June 2020, the Northern region of Tigray lay under the control of the Ethiopian government. Just a week later, Tigray rebels launched an attack on the region and successfully captured it. In November 2020, the Ethiopian government launched military operations against the Tigray People’s Liberation Front (TPLF), the new ruling party of the Tigray region. Since July 2021, an effective siege of Tigray has been made, resulting in major atrocities. This siege quickly spread amongst other close regions, eventually leading to both the Eritrean and Ethiopian governments joining forces to tackle the conflict. All parties have been accused of summary executions, rape, massacres, arbitrary detention and forced displacement. In December 2021, the OHCHR initiated an investigation into these accusations where they condemned any instances of war crimes. What began as a mere conflict between the parties had escalated into a full-blown civil war by 2021. Millions of people have been internally displaced, as well as hundreds of thousands living in dire famine. The few medical facilities left standing became quickly filled with those injured by the siege, including many child victims.

Over 1.2million people have been displaced from Western Tigray since the beginning of the conflict. This displacement is further exacerbated by the lack of access to humanitarian aid in the region.

In what has been described as a ‘new wave’ of atrocities by Amnesty International, the violence is only beginning to truly escalate. Both Genocide Watch and Early Warning Project prior to November 2020 listed Ethiopia as one of the highest risk states regarding violence. Genocide watch went so far as to categorize the status of Ethiopia as the two highest risk categories they present. They claim that both ‘extermination’ and ‘denial’ relating to genocide are occurring within the state alongside the ‘organization’ of these acts.

TPLF has blamed Eritrea and Ethiopia for 52,000 civilian deaths since the beginning of the civil war, particularly when involving militia forces made up of ethnic Amharas with the support of the Eritrean Defence Forces. These have supposedly occurred through the rampant shelling and artillery being fired at small villages in the Northern region. TPLF claim that schools, religious institutions and hospitals have been completely looted and destroyed by the government forces. 120 people were summarily executed by Tigray rebellion forces over a two day period in Amhara, roughly 10km from Dabat. A further 29 ethnic Tigrayans were found murdered by the Setit River along the border of Ethiopia and Eritrea. A Tigrayan group known as ‘Samri’ has also committed widespread murder against ethnic Amharas, totalling in the hundreds. What appears to be a brutal ethnic war between the dual native ethnicities has caused the deaths of thousands. Notable massacres include; the murder of 200 men in Maikadra by the Samri, the deaths of 100 more people in Aksum in November and the murder of 70 more men in Bora.

On July 6th 2021, a new push to take Western Tigray was made by the government forces, they successfully took the province 6 days later. A further 1,900 people have been identified as massacre victims by an informant network producing research on the civil war. Their findings get more disturbing, concluding that over a 3 day period, 250 civilians were murdered in the town of Humera. The assault on Aksum left hundreds of unarmed civilians dead between November 26-29th. Led by Eritrean forces, the killings lasted from morning till evening, with every civilian in the street being a target. Eritrean forces then went house-to-house to find and kill all men they could find,  leaving all women alone. After the onslaught of gunfire, those who tried to gather the bodies for burial were attacked, going as far as shelling areas where people were trying to move bodies.

The statistics paint an equally horrific picture. They found that only 3% of murdered civilians were killed by indirect causes such as airstrikes or shelling, the majority were killed by summary executions in areas such as Aksum, with an estimated death toll of 800. Approximately 59% of these killings were made by either the Eritrean or Ethiopian government, while 18% of murders were committed by both government forces together. The remainder primarily relates to the TPLF and Tigrayan Special Forces (TSF) respectively.

While ethnic cleansing does not constitute a crime, it can often be a process to aid in a larger scheme such as potential genocide. Many roundups of Tigrayans have been taking place since the beginning of the conflict. In the towns of Adebai, Humera and Rawyan, Amhara forces expelled all of the young children, women and older generations towards Central Tigray. In Humera, 20 trucks were filled with people to be removed from the area to an unknown destination. Witnesses claim this happened the next day as hundreds of people were cleansed from Humera. A US report into Ethiopia concluded that Prime Minister Abiy is “deliberately and efficiently rendering Western Tigray ethnically homogeneous through the organized use of force and intimidation.”

Ethnic atrocities peaked in November 2020 after a set of brutal attacks in Mai Kadra, leading to 600 deaths. A massacre occurring on November 9th saw the Tigrayans murder ethnic Amhara in the area. Tigray forces detained civilians of Amhara origin and beat them after taking over their property. This was described as a “brutal ethnic cleansing” by the area’s Minister. Dead bodies were strewn all over the town, the TPLF were supposedly responsible for another brutal attack per witness testimonies. Local Amhara residents had their ID cards checked by the TPLF and were told to remain indoors, shortly after a series of door-to-door searches took place in which Amharas were targeted and killed. This ID card process has also happened to the Tigrayans. Amhara authorities burned those IDs who stated the individual was a native Tigrayan, even going so far as to murder any Tigrayan who was not employed. After the November massacre, many Tigrayans fled after reports of retaliation from the ENDF and ASF, this later led to the deaths of 200 innocent people.

Between the 6th and 9th of November, ethnic-based attacks were being made by the TSF. Two separate farms were attacked during this time period, causing 17 civilian deaths. They further destroyed precious farmland near the area of Mai Kadra, in what was described as an “ethnicity-based” attack. Amhara’s were forcibly displaced from Mai Kadra in the masses without any legal justification. This was a response to the hundreds of thousands of Tigrayans who had been forced to flee the incoming assault against them just months before. These displaced persons have suffered greatly, with some 70% of displaced persons not having access to basic food provisions. In the surrounding regions of Mai Kadra, mass displacement of Tigrayans was made from Western Tigray, with the focus being on the towns of Dansha and Humera. In the same areas, the OHCHR found reports of more ethnic-based attacks on the Amharas by Samri.

The threshold for genocide is extremely high, it is not a mere set of mass killings of a particular group, or even smaller groups attacking very specific people, therefore there is an often-mistaken overlap with crimes against humanity. Crimes against humanity follow the opposite process yet accounts for the same types of crimes e.g murder, sexual crimes, forced displacement etc. The genocide definition and its present relevant sections are found in Article 2 of the Convention on the Prevention and Punishment of the Crime of Genocide (Genocide Convention):

1. Genocide means any of the following acts committed with intent to destroy, in whole or in part, a national, ethnical, racial or religious group, as such:

Crimes against humanity and their relevant sections are found in Article 7 of the Rome Statute:

2. Any of the following acts when committed as part of a widespread or systematic attack directed against any civilian population, with knowledge of the attack:

Genocide must be supported by the mental element (mens rea) known as genocidal intent. The physical element (actus reus) is the act itself, such as murder or extermination on a scale equal to engaging the article. This special intent that applied to genocide is engaged when the perpetrator of the crime knowingly and willingly brings about the partial or whole destruction of the group. This special intent can be highlighted when there is some form of overarching plan in relation to oppressing a certain group. For example, legislation such as the ‘Population Registration Act’ that facilitated cultural genocide during apartheid is significant evidence that ill intent towards an entire group within a state was present, when this is substantiated through widespread violations of Article 3, this can form genocidal intent and may expand into the act itself. Genocide is defeated when the intentions of the acts are not intrinsically linked with the mentality that drives the act. For example, a pure quantitative analysis of the farm attacks between November 6th and 9th that caused the deaths of 17 people would be difficult to conclude as genocidal intent. However, these attacks can constitute a crime against humanity, as in practice, there is no quantitative analysis needed to distinguish intent and action, it is the act itself that is the quintessential component.

Do these atrocities constitute genocide?

With careful review of all available information, neither side of the civil war have constituted genocide, yet genocidal intent could be met if substantiated further. This intent may be met because of the clear ‘brutal ethnic cleansing’, particularly between the Tigrayans and Amharas (supported by government forces). This would fall under both a crime against humanity (art. 7 (a,h)) and a partial genocidal act (art. 3 (a,c)), yet there is not an overwhelming conclusion to be made as to the current state of genocidal intent in the state. A primary issue is that in many instances, the women were left alone and only the men were executed or murdered, this echoes the same patterns as the Srebrenica massacre during the Yugoslav wars. From this we have a ‘part of a part of a part of a group’ scenario in which the definition of genocide is diluted in a manner to which basic crimes against humanity can engage Article 3.

Image: A destroyed armored vehicle in one of the main streets of Hawzen (Source: Yan Boechat/VOA/Public Domain)