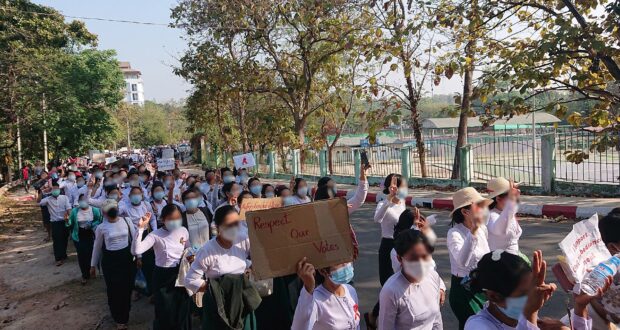 The acting military has had significant control over the Myanmar government for decades. From 1962-2011, there were a series of successive military rulers in the State. A military coup in 1962 ended the democratic government and would continue for many terms. Myanmar became a notionally socialist state between 1962-1988 under the control of General Ne Win and the Burma Socialist Programme Party (BSPP). From 1988-2011, another direct military ruler controlled by the State Law and Order Restoration Council (SLORC) took over the government. President Thein Sein who was elected in 2010 would hold office for 5 years before losing the 2015 election to the NLD party.

On February 1 2021, a military coup took place and the armed forces seized control of Myanmar after the election defeat to the NLD party led by Aung San Suu Kyi the year before. In 2020, Myanmar’s general election saw the military’s USDP party lose majority seats in both houses to NLD. This is despite the Constitution of Myanmar allowing for 25% of the control of Parliament to be reserved for the acting military. Six months later, the results were annulled by the emerging Myanmar coup after claiming the election was “not free and fair”. After this, a new government took over under the command of the military and have had effective control over the State ever since. This sparked protests across Myanmar, a resistance headed by the Civil Disobedience Movement (CDM), comprised of NLD politicians and other influential people took to the streets. A new unofficial government spawned from this movement called the National Unity Government, they have since been declared a terrorist organisation by the new de facto authorities.

The new military government under the control of Min Aung Hlaing has committed widespread atrocities against those who protested against the takeover, including the use of water cannons, live gunfire and rubber bullets. Amongst these instances lay more grievous ones, accusations of murder, enforced displacements, sexual assault and torture run deep. A total of 286 attacks on health care services were recorded in under a year, resulting in the deaths of 26 with further injuries in the hundreds. In what’s been described as a ‘criminal enterprise’, the military government have steadily increased their attacks on the innocent people of Myanmar, causing further escalations in recent months. There are reports of mass murder, attacks on hospitals and humanitarian targets as well as the bombing and burning of villages.

Additionally, even prior to the coup, the Myanmar military had a history of deep-rooted abuses of power. One of the most recent major episodes was the 2017 Rohingya crisis in which 700,000 people had to flee from Myanmar to Bangladesh due to fear of violence. Because of the Myanmar crisis, the Rohingya people are now the largest stateless population in the world. They are not recognised as an official ethnic group of the state, therefore their claims to citizenship are slim at best. As of 2022, 150,000 IDPs have been identified and face severe movement restrictions, including being arbitrarily detained in camps. An additional 470,000 Rohingya people remain in Rakhine, alongside a further 860,000 Rohingya refugees of which 700,000 fled Myanmar in 2017.

Report of the Independent Investigative Mechanism for Myanmar (IIMM)

The IIMM is an independent body established by the UN Human Rights Council. It is mandated to collect evidence of the most serious international crimes and violations taking place within the state. This is done so with the aim of prosecuting those involved as war criminals. Preliminary analysis of the events in Myanmar as of 2021 is near conclusive. The mechanism has established that due to reports of actions taken by the military coup that there is a very real possibility of crimes against humanity being committed, therefore it falls within the mandate. Hundreds of civilians have been killed across Myanmar over a variety of cities. Available information shows that the military has arbitrarily detained thousands and committed acts of torture and sexual violence. Targeted individuals have typically been so because of their political affiliation, profession or their involvement in political rights protests.

In a swift conclusion, the IIMM has found that there is significant evidence that points to the committing of serious international crimes against the Myanmar population. These have been categorized as widespread and systemic, and if substantiated further, may amount to crimes against humanity.

For the purpose of this Statute, “crime against humanity” means any of the following acts when committed as part of a widespread or systematic attack directed against any civilian population, with knowledge of the attack:

These attacks may take place in a single location, such as the camps the Rohingyas are being held in or they can be committed across a broader territory.

More than 1000 civilians have been killed since the beginning of the military coup. These have taken place across both long periods and short bursts of violence. For example, 114 unarmed citizens, including two young children, were murdered by the military government’s security forces in just a single day. This tragedy came as a reaction to a protest against the coup, protesters were warned that they would be “shot in the head and back” for interrupting Armed Forces Day. Near the village of Mo So, over 30 people were killed, including two disappearances of representatives from the Save The Children charity. Civilians at the scene were reported to have been used as ‘target practice’ by the military. These civilians were supposedly targeted because they were ‘armed terrorists’, yet no evidence currently supports this claim. In another instance, villagers were rounded up and executed individually, this has been corroborated by video footage from the scene, further showing them being forced to dig shallow graves. In Yin village, a further 14 men were tortured and beaten to death. Zee Bin Dwin village was littered with 12 mutilated bodies in shallow mass graves, one suspected of being a child.

It is evidently clear that these actions are part of a systemic and widespread attack against the civilian population of Myanmar. While these actions do not amount to genocidal intent, the de facto authorities of the state are those executing the orders for the murder of innocent people. Therefore, given all evidence above, the IIMM’s claims that murder as a crime against humanity have been committed is substantiated, resulting in a flagrant violation of Article 7.

Sexual based violence has a long history dating back to colonialism, and these times are echoed by the actions being taken today. The military has been committing sexual-based violence against women in Myanmar for decades. An analysis of sexual crimes committed between 1998 and 2015 found that in 85% of the cases, the perpetrator was identified as someone in uniform. This does not strictly mean that they were all committed by the military, but by de facto authorities in general.  Women have been severely affected by the takeover. They have frequently been taken hostage, tortured, killed and sexually assaulted. These take place at the hands of the military, as women make up 54% of those displaced, they are disproportionately affected by the internal conflict.

Rape has been described as an instrument of war and oppression and this is no different when discussing Myanmar. One testimony described how rape is used against those who want to “live in peace” and just “assert their basic human rights”. Data collected since 2010 supports this claim. It was found that the Myanmar military commits sexual crimes with particular cruelty. The numbers of these crimes increase with military offensives, showing a direct correlation between the presence of the Myanmar military and a spike in sexual crimes. These crimes appear to be part of an institutionalized and widespread practice. The vast majority of cases remain unpunished because of the military and judicial authorities actively maintaining the current system of impunity, therefore, effective remedies are slim to none. The International Centre for Transnational Justice described this situation as “indicating institutional support” for these actions. The widespread nature is not limited to the current coup but existed decades before under the prior Thein Sein government. This goes to show that the presence of the same military structure only enables sexual crimes, regardless of who is in office.

Myanmar’s military has forcibly disappeared hundreds of people, including politicians, election officials, journalists, activists and protesters. Since the takeover, over 7,627 people have been detained, only 18% have had their location information revealed in some form. General information regarding the whereabouts of any of these individuals is scarce. There have been refusals to provide lawyers for those who are forcibly disappeared as well as no knowledge of their locations being provided to family members. Activists appear to have been targeted the most. Human Rights Watch estimates that of 2,500 detainees counted, only a tiny fraction of them have been identified, let alone released.

Two high profile disappearances, those of Mya Aye and Yan Paing Hein, are still unsolved. Mr Aye has been a vocal critic and pro-democracy for decades, he has been arrested twice prior in 1998 and 2007 for his activism. On the day of the takeover, Mr Aye was arrested at his home, his family later went to the local police station two days later to ask for information about his arrest. They were given no information at all regarding his disappearance, due to this, they began international proceedings. Firstly, they made an appeal o the International Committee of the Red Cross, and later to the United Nations Working Group on Enforced or Involuntary Disappearances. After two months, no information regarding Mr Aye’s location, charges against him or even his condition had been revealed to his family.

Mr Hein was arrested on March 9th, alongside 22 other residents. During his arrest, guns were pointed at him and many of the others arrested were beaten, causing serious injuries. Again, the authorities have refused to provide any information regarding the whereabouts of Mr Hein, yet an informal source told the family he was being held in Insein prison. This prison has multiple reports of; beatings, a lack of medical aid, torture, inhuman treatment and a lack of food and water. Contact with Mr Hein has been attempted by his lawyer, but yet again, nothing has been heard.

It is abundantly clear from the evidence that not only have these atrocities against the individual been happening since the takeover, but also decades prior. The takeover has certainly amplified international attention towards the state. Despite this, any real progress is yet to be made. Not only have widespread and systemic crimes against humanity taken place, but also frivolous attempts to deny effective remedies and due process to those who are being arbitrary detained, in violation of Article 17 of the International Convention for the Protection of All Persons from Enforced Disappearances.

2022-03-11
Sam Biden
Previous: Putin vs. the World
Next: Ethiopian atrocities – Genocidal intent or Crimes against Humanity?