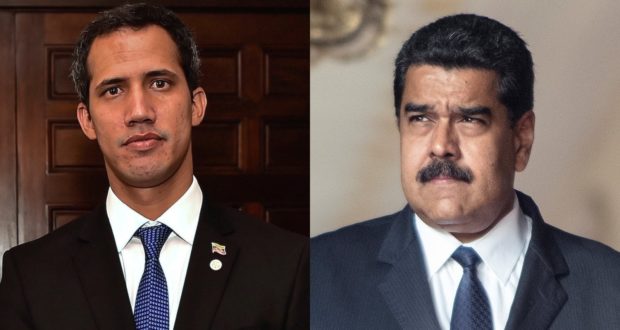 Venezuela: The State with two Leaders

The situation in Venezuela has been deteriorating, marked by economic collapse, violence and food shortages. Over three million citizens have fled the country and many more cross the border every day. The last election resulted in a presidential crisis, with other nations pitching in to choose sides. Venezuela is currently serving as a proxy for international divisions, amidst a backdrop of civil unrest and political tensions.

Venezuela’s previous president, the charismatic socialist Hugo Chávez, had nationalised the oil, agriculture and mining industries. He significantly reduced the power of multinational corporations as part of his policy of ‘wealth redistribution’. Venezuela’s economy improved during this time, reflected by a rise in GDP, a significant drop in inflation and reduced unemployment rates. However, despite holding the world’s largest oil reserves, when the oil price fell in 2013, Venezuela’s economy collapsed. This occurred in part due to overreliance on the oil industry, as well as economic mismanagement, corruption and low productivity rates.

After the death of Chavez in 2013, his protégé Nicolás Maduro took over, winning his election by a slim margin, which prompted challenges to the legitimacy of his administration. The economy has further deteriorated under Maduro, as hyperinflation has rendered the currency worthless. Famine and disease cripples the nation, with the United Nations reporting that now one in five citizens is suffering from hunger. More than ten percent of the population has fled abroad. There are 1.5 million Venezuelan migrants and refugees living in neighbouring Colombia, with many more fleeing westwards, across the permeable border between the two nations. Some 700 – 800 Venezuelans are estimated to be crossing the southern border to Brazil every day.

Maduro has denied the severity of the problem, instructing departed citizens to “stop cleaning toilets abroad and come back to live in your homeland”. After these comments in August 2018, nearly a hundred Venezuelan migrants in Peru made an unexpected journey back home, taking up their government’s offer of a free flight.

However, the situation in Venezuela remains dire, exacerbated by the latest challenge to the nation in the form of a presidential crisis. Maduro remains in power, backed by the military, as well as foreign allies, Cuba, Turkey, Russia and China. However, in January 2019, Juan Guaido declared himself interim president, supported by Colombia, the US and 50 other nations.

Maduro had called for the 2018 elections to be held half a year early. Although constitutional, this did not leave enough time for the divided opposition to choose a candidate, particularly as Maduro’s main opponents were either in exile, kept under house arrest, or banned from political activity. Many boycotted the vote, with turnout for the election at a measly 46.7%. Maduro won with 67.8%.

Guaidó was put forward, as a youthful, genial, and incorruptible candidate, often likened to a young Barrack Obama. Despite being involved in politics for many years, he was virtually unknown outside political circles, offering a fresh face as part of the solution to Venezuela’s problems. As the President of the National Assembly, arguably the only democratic and legitimate power remaining in the nation, many see Guaidó as the perfect candidate for the role.

Guaidó is urging Venezuelans to overthrow the Maduro regime in what he calls ‘Operacion Libertad’, Operation Freedom. However, the military and paramilitary gangs have remained loyal to Maduro, with ‘colectivos’ patrolling the streets and intimidating protesters. The nation now remains in a political gridlock, with violence becoming a daily occurrence.

The United States was quick to show its support for Guaidó, with President Trump’s national security adviser, John Bolton, extending US protection to him:

“Any violence and intimidation against U.S. diplomatic personnel, Venezuela’s democratic leader, Juan Guaidó, or the National Assembly itself would represent a grave assault on the rule of law and will be met with a significant response.”

Maduro responded to US support for his rival by severing diplomatic relations with the United States, giving US diplomats 72 hours to leave Venezuela. Secretary of State Mike Pompeo further undermined Maduro, stating:

“The United States does not consider former president Nicolás Maduro to have the legal authority to break diplomatic relations. […] the United States will take appropriate actions to hold accountable anyone who endangers the safety and security of our mission and its personnel.”

US diplomats ultimately left Caracas in March 2019, ending the US presence in Venezuela and signalling a termination to diplomatic relations. Further US sanctions have put pressure on Venezuela’s economy, although supported by Guaidó. High-level talks between the Maduro administration and the US are being brokered by Norway, although they are currently on hold.

Both China and Russia have backed Maduro, as part of a coalition of nations threatening to fight the so-called “illicit, American-led effort.”

At the Security Council Meeting, the Russian representative referred to US intervention efforts at the Colombian border to Venezuela:

“Let us call a spade a spade. This is not humanitarian aid. […] If the United States wanted to deliver aid, it would do so through an international aid agency.”

Cuba, Iran, Nicaragua, North Korea, Syria and Turkey are among some of the other nations that have extended support to Maduro, expressing concern regarding US intervention in a sovereign nation.

Colombia has expressed support for Guaidó, acknowledging the human rights violations and the need to restore freedom in Venezuela.

Political instability in Venezuela has manifested itself in increased military activity, as Maduro focuses on external threats to the nation. A nation that feels that its fundamental fabric is threatened, may not behave in ‘rational’ or predictable ways.

The Venezuelan military has been holding drills along the Colombian border, mobilising tanks, personnel and aircraft. This has dramatically increased tensions between the two nations.

Furthermore, as Venezuela focuses on flexing its military might along its borders, it is redirecting resources that are desperately needed to alleviate the ongoing crisis in the nation.

At the international level, no consensus was reached on Venezuela in meetings of the Security Council. Venezuela recently won a seat on the UN Human Rights Council despite opposition from other nations, particularly the US.

The European Union has called for new elections in Venezuela but has not explicitly recognised Guaidó as the president. EU officials have expressed urgency to find a political, peaceful and democratic way out for the multiple crises the country is facing.

The Organization of American States agreed “to not recognize the legitimacy of Nicolas Maduro’s new term.” This has deepened divisions in the region, as some nations continue to offer their support to the Maduro administration.

An end to the Crisis:

The immediate concern is the provision of aid to civilians. The US and other nations have been stockpiling food and medical supplies on Venezuela’s borders with Colombia and Brazil, while Russia and China delivered supplies to Venezuela.  Violence broke out earlier this year when Venezuelan security forces impeded efforts led by Juan Guaidó to bring food and medicine into the country, burning several trucks. It is essential that Venezuela’s citizens receive humanitarian aid, and that the ongoing Presidential Crisis does not jeopardise such operations.

There is a need for a long-term solution that restores democracy and the rule of law, initiates dramatic economic reform and puts an end to the violence. Many nations have expressed that it must be left to the Venezuelan people to transition towards democracy. However, it is critical that the international community pitches in to put an end to the conflict.

The Montevideo Mechanism, signed by Mexico, Uruguay and the Caribbean Community (CARICOM) is an initiative seeking peaceful and democratic solutions to the crisis in Venezuela without threat of military intervention. Acutely aware of the impact of US interference in the region in previous decades, the Mechanism promotes diplomacy and de-escalation. It offers a four-phase solution by establishing common ground and the relaxation of positions. Such regional initiatives are less likely to ignite tensions than a heavy-handed approach.

The UN should continue to facilitate aid distribution and support. Such assistance should remain free from political influence, so as not to impede cooperation. The UN must continue to expand its efforts, but it is up to Venezuelan authorities to consent to these and prioritise the interests of its citizens. Ultimately, the International Criminal Court should consider looking into crimes against humanity by the Maduro regime. It is essential that there is accountability, so as to set a precedent in the region.

2019-11-13
Theodora Ogden
Previous: A Warning for the West: Russia Continues to Strengthen its Arctic Presence
Next: Should Europe embrace Chinese businesses?