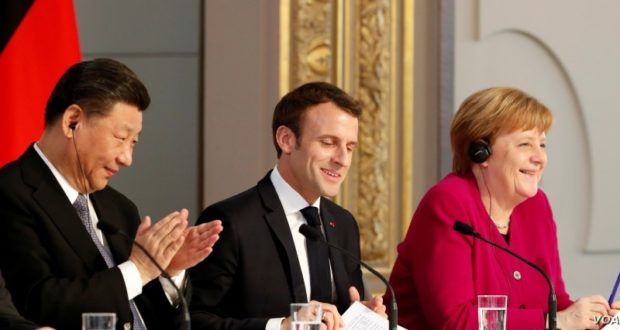 With an isolationist-minded President in the White House, an attacking-minded government in Beijing, and a European Union looking to secure new alliances, global geo-economics has become increasingly complicated. Europe, in particular, seems to be caught in a situation where it is going to lose one way or another.

Right now, a major talking point in Brussels, Berlin and Paris revolves around 5G—the state-of-the-art cellular network technology that offers faster connections and more capacity than 4G. Customers, companies, and new inventions like real-time health analysis and self-driving cars may benefit from the advantages. But there is a catch to all of this.

Since China was behind on 4G, the Chinese telecommunications industry invested heavily in 5G research with the effect that now the industry leader Huawei is ahead of competitors Nokia and Ericsson. Huawei, however, is accused by its critics of incorporating cyberespionage tools such as kill switches and backdoors into its merchandise. Since the Chinese National Intelligence Act from 2017 obligates every Chinese company to collaborate with the country’s intelligence services if asked to, Huawei could get into a situation where it would have to exploit the 5G products it incorporated into the critical infrastructure of EU member states for Beijing’s ends.

The European Union Agency for Cybersecurity sees considerable threats from non-European 5G vendors. The 48 threat scenarios the agency has listed in a recent report include classic hacking attacks through denial of service and zero-day exploits, traffic sniffing, and the abuse of lawful interception.

The gap between Huawei and its competitors is so wide that the exclusion of the company from any 5G infrastructure would mean a significant delay before Europe could reach the full potential of that particular technology. Since Europe and its member states have an interest in obtaining a competitive advantage against other regions in the world, or at least be on an equal playing field with them, the EU is faced with a difficult decision in the upcoming months.

Of course, Europe does not want to be dependent on anyone regarding key infrastructure, be it the United States or China. The conflict about 5G is very much political, and not so much a technical one, because potential cyberespionage tools be can difficult for any security institution to locate, and could realistically be inserted in any product from any company given the history of cyberespionage in the past 15 years.

The potential involvement of Chinese companies in Europe’s key infrastructure has again activated transatlantic networks which raise concerns regarding Beijing and its intentions. The US lobbies European governments hard – and the need for US intelligence support and security guarantees gives such words power. The EU itself increasingly focuses on the aspect of like-mindedness when it comes to collaborating with countries and companies from other continents. The EU-Asia connectivity strategy, for instance, emphasises that the EU should cooperate with Japan and South Korea because they have much in common in terms of values and political world views. These issues add an extra dimension to Europe’s China challenge.

Even if we assume the best of Beijing’s intentions, China’s government often struggles to convey that its priority is generating as much revenue as possible with investments in foreign countries. And there are arguments for more geopolitically driven intentions. Many African countries now have a significant Chinese footprint—with the PLA’s first major foreign military base having opened in Djibouti in 2017. There is also a political dimension to European countries’ dependency on exports to China, and with many companies in the world being at least partly owned by Chinese investors.

If Chinese actors in business and finance are under the control of Beijing, it is likely that the degree of control is variable. However, it remains difficult to divorce these actors from the overall strategy of the country’s leadership—though Huawei, for instance, argues that the Snowden leaks have shown how the NSA monitored the communication of the Huawei board for years and could not prove any political influence by the Chinese government. Nevertheless, Chinese companies have never been able to refute the accusations of Beijing calling the shots, be it by controlling the board or through laws.

If Xi Jinping follows a plan of neo-colonialism through economic dependency, then Europe has to back off, even if it would set back the continent in terms of technological progress. However, if China is all about the money and just views Europe as a highly important market for business and innovation, then there is a case to be made that Europe should not expedite a further fragmentation of the world which could very well lead to a Cold War.

If we give the Chinese leadership the benefit of the doubt, then the country and its political and economic leadership have a communication problem. The United States, in the age of Trump more than ever before, is very much on the nose with its messages and geopolitical positions. China, however, often emphasises an open-door-policy when it comes to collaborating in industries, and then uses different verbiage when it is pressured by the West and does not get its way.

There are undeniably cultural differences that require a mutual understanding between both sides. The Chinese have to understand how Europeans view any kind of human rights violation and offensive military employment extremely critically. European countries that usually hold human rights in the highest regard and base their social fabric to a large extent on equality and protection of the individual cannot sell out on issues like the Fugitive Offenders amendment bill that triggered the protests in Hong Kong or the internment of Uighur Muslims in the Xinjiang region.

On the other hand, Europeans have to understand how China wants to make progress as fast as possible and is sensitive about Westerners interfering in its domestic issues. This stems from an understanding of territorial independence and, of course, from what is called the Century of Humiliation, a period of intervention and imperialism by Western powers and Japan in China between 1839 and 1949.

The usage of the Century of Humiliation in the Chinese Communist Party’s historiography and modern Chinese nationalism, with its focus on the sovereignty and integrity of Chinese territory, has been invoked in incidents such as the US bombing of the Chinese Belgrade embassy and the Hainan Island incident. The phrase can be used to deflect foreign criticism of human rights abuses in China and domestic attention from various issues, though it also signifies how the Chinese leadership whose predecessors a few centuries ago were inventors and economically relevant are attempting to rebuild a certain kind of national pride.

At this point, the European Union has already committed many mistakes dealing with China—in the context of 5G and many other infrastructure-related projects. There is already a division in factions since some member states conduct their own deals with China, while ideally the Union would act as one entity in such matters.

The European Union is behind on many key technologies, thus the EU and its member states have to decide whether they commit to a common strategy and invest large subsidies in some companies that could develop the next generation of technology in various fields, even if that would mean to deviate from the concept of an open and fair market.

Martin Wolf recently wrote in The Financial Times: “China will not accept permanent inferiority. Europe should not want it to be permanently inferior either.” The European Union has criticised China for a lack of economic reciprocity, while in fact the situation is much more complicated. Many companies from Germany or France are already market leaders in certain industries in China and are not forced to set up joint ventures anymore. Europe has to lobby for fair market rules in China, but should consider carefully whether a call for reciprocity contradicts the concept of an open market system which is often valued so highly by the European Union.

The European Union has declared China to be a “systemic rival”. But, in reality, such a strong stance is not helpful in the context of global economic dependencies. Europe has to be more confident in the strength of its own system and be the “empire by invitation” as Geir Lundestad defined Europe, instead of fearing the superiority of China’s state-capitalist model.