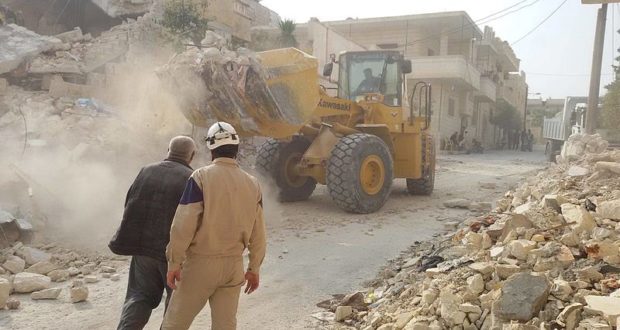 Earlier this month, James Le Mesurier died near his home in Istanbul, at the age of 48. A former British Army officer and humanitarian, Le Mesurier had helped found the White Helmets, a civil defence organisation in Syria, famous for saving the lives of civilians trapped in the conflict. The group started in 2014, after Le Mesurier coordinated a group of Turkish earthquake rescue workers to train around 20 civilian volunteers from Aleppo. By 2017, more than 3,000 volunteers were operating across Syria. Their tasks expanded beyond emergency response, to fixing electrical grids, maintaining sewage systems, clearing rubble, removing unexploded ordnance, as well as preparing communities for future attacks.

Le Mesurier admired the courage and determination of civilian volunteers risking their lives to help others. Speaking to the BBC in 2014, he commented:

“These are ordinary individuals. Former bakers, former builders, former students who had choices for what they were going to do with their lives within the revolution. These individuals chose to stay, with very little equipment and at the beginning with no training whatsoever, to respond to bomb attacks, to respond to shellings and try to save their fellow Syrian civilians.”

Le Mesurier was committed to training local people in rescue and emergency response, rather than bringing in outside intervention. He firmly believed in empowering others. In a 2017 interview he stated:

“As the founder, I had an idea and got to watch it take shape but the White Helmets themselves are a 100% Syrian organisation.”

However, the White Helmets were targeted for broadcasting footage of the atrocities committed by Syrian government forces against civilians. The Assad government designated them a terrorist group, targeting them with “double tap” bomb attacks, whereby the first airstrike is followed by a second, to hit first responders rushing to the scene.

The organisation has also been subject to disinformation campaigns coming out of Russia. In addition, alt-right spokespersons have accused the White Helmets of taking sides in the Syrian Civil War, carrying arms and supporting terror groups. Hamish de Bretton-Gordon, a director of the Doctors Under Fire campaign group, as well as Le Mesurier’s friend and former colleague, observed that he had been under ‘tremendous pressure’ from Russian and Syrian propagandists who accused the White Helmets of being al-Qaeda operatives.

In the United Kingdom, James Le Mesurier has been recognised as an extraordinary human being, dedicated to helping others. In 2016, he received an OBE (Officer of the Order of the British Empire) for “services to the Syria Civil Defence group and the protection of civilians in Syria”. The UK’s representative to the United Nations, Dame Karen Pierce, called Le Mesurier a “real humanitarian” and a “true hero”. Le Mesurier has left a mark on the world, establishing one of the most well-known humanitarian organisations to operate within Syria. The White Helmets estimate that their rescue workers have helped save over 100,000 civilian lives in Syria, and the group has been nominated for a Nobel Peace prize three times.

HSC will be following the inquiry into James Le Mesurier’s death closely.

2019-11-30
Theodora Ogden
Previous: Should Europe embrace Chinese businesses?
Next: The Ethics and Function of Military Animals