There is a genocide happening now, a quiet genocide that very few are listening to. It is claiming the lives of the silenced, the overlooked, the defenseless. It has taken more lives than all of the genocides in the twentieth century combined. It is happening now. A chorus of smothered voices is crying out from the grave. Can you hear it? [1]

The oppression of women is something that most of us in the developed world are unaware of. After all, women can vote, own property, and receive an education. We see them thrive and make steps toward full equality everyday. But we often forget the struggle it took for our societies to get where they are now, the abuse endured, the mockery withstood, the lives lost. We forget that we are not alone in this struggle, and that other women still suffer at the hands of patriarchy.

Millions are being killed, simply because they are female. In China, the government’s one child policy has lead to sex-selective abortion, a practice that has become the primary method for eliminating baby girls around the world. [2] Violent effects of gender bias are most prominently seen in East Asia, South Asia, West Asia, Eastern Europe, North Africa, and Sub-Saharan Africa, although no country is exempt. [3] If baby girls are given the chance to be born, they are very often drowned, suffocated, strangled, or abandoned. Many girls who live past infancy face terrible discrimination and are given a disparate amount of food and medical care compared to their male counterparts. [4] If young girls live into their childbearing years, the stats are not much better. According to the World Health Organization, roughly 800 women die in childbirth every day from preventable causes. [5] An article from the United Nations Regional Information Centre for Western Europe says it this way: “Imagine a Boeing 747 full of pregnant women crashing every day. That’s how many women die in childbirth, every day.” [6] Other atrocities such as intimate partner violence, female genital mutilation, dowry murders, honor killings, and gang rape also contribute to this genocide and are notable for their extreme brutality. [7]

Even in the midst of our Western-centric worldviews, we are aware of other humanitarian crises. Why is this one going unseen, unheard? A few different theories have been brought forth to answer this question. The most prominent argument is that the historically patriarchal traditions of many of these countries have become so deeply ingrained in the culture, that even most women have learned not to question the violence wielded against them. Furthermore, this violence usually happens within the privacy of the home, a place  outside the arm of the government. The theory is that if the victims are not recognizing or not voicing the injustice being done, and their societies condone the injustice, it is going to take that much longer for the rest of the world to recognize the problem.

This certainly seems to be supported by data now coming from many of the countries where this genocide is occurring. UNICEF’s 2012 “Progress for Children: A Report Card on Adolescence” revealed that 53% of India’s young women publicly claim that husbands are justified in physically abusing their wives, while 80% of young Nepali women say so when asked. [8]

Traditions are powerful and they influence cultural opinion on what is considered acceptable behavior and what is not. Traditions of male dominance in the home and exchanging brides for money, to take two examples, enforce a very real standard of male superiority and female commodification. I believe that the extent to which these patriarchal traditions are ingrained into culture is a major factor in the invisibility of this genocide.

I would like to propose another theory. I believe the limited definition of “genocide” contributes to the invisibility of the injustice being done to women.

Raphael Lemkin, a Jewish lawyer, was the first to write about genocide in his 1944 work, Axis Rule in Occupied Europe, in which he used the term to describe the mass murder of Armenians and Assyrians in 1915. [9]

The term was not widely used, however, until after the UN “Convention on the Prevention and Punishment of the Crime of Genocide” in 1948. The purpose of the convention was to specifically address the horrors committed against the Jewish people by the Nazi regime during WWII, and to ensure that such horrific events never happened again. The problem that the UN faced during this convention was that there didn’t seem to be an existing classification that accurately described the crimes that had taken place during the war. To remedy this problem, the convention claimed the term “genocide” and, with Lemkin’s assistance, gave it the following definition:

In the present Convention, genocide means any of the following acts committed with intent to destroy, in whole or in part, a national, ethnical, racial, or religious group, as such:

(a) Killing members of the group;

(b) Causing serious bodily or mental harm to members of the group;

(c) Deliberately inflicting on the group conditions of life calculated to bring about its physical destruction in whole or in part;

(d) Imposing measures intended to prevent births within the group;

(e) Forcibly transferring children of the group to another group. [10] 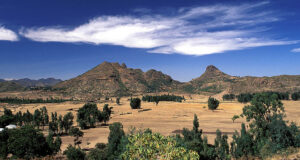 The Political and Economic motivations behind the Ethiopian conflict in Tigray