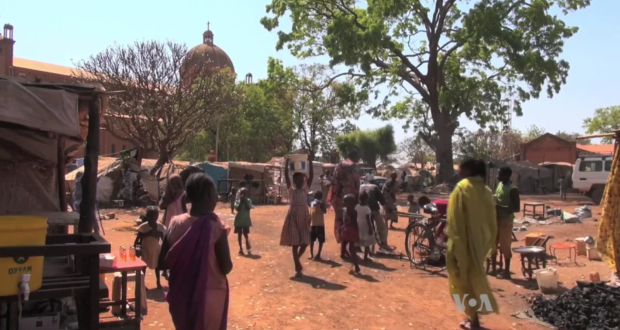 South Sudan gained independence in 2011 on the tail end of a 22-year conflict. With the forced removal of President Salva Kiir and replacement with President Riek Machar, violence erupted within the State. With the oncoming violence came a rampant increase in conflict-related sexual violence (CRSV), putting tens of thousands of women and girls at risk. The OHCHR states that sexual violence has been instrumentalised as a reward and entitlement for young men that participated in the conflict. They cite that failed efforts to reform the security sector has allowed these kinds of abuses to continue to escalate without any significant legal redress for victims. After a failed 2015 peace agreement, peace mostly came to South Sudan, with a revitalised agreement in 2018 that formally ended the conflict. While this offered positive progress for the regression of CRSV it did not translate into a safer environment for women.

In general, the South Sudanese environment still offers the notion that women exist as commodities rather than individuals. Testimonies given to various NGOs point out that women are not the decision-makers in South Sudan and that ‘men can do anything’. These concerns are heightened when the South Sudanese government (GoSS) discovered through their own research that many women face physical abuse as retaliation for basic things. For example, leaving the house without telling your husband, arguing with male heads of the house and the neglection of household duties are all grounds where physical violence is used as a punishment.

Armed groups have been using mass rape of as a weapon of war in South Sudan for many years. The OHCHR notes that there is a correlation between mass rape and attacks on villages or settlements while women engage in day-to-day life. Many of these women have stated that they would be beat or even threatened with death if they did not comply. One woman stated:

“After one man bit me, another pointed the gun directly on my chest and said if I don’t accept them then he will kill me”

The incidents of mass rape have a high degree of planning and deliberate intention, they are not merely incidents of opportunity and action. Many of the planned areas are remote and isolated, because of this, small groups of women often walk together in the surrounding areas going about daily activities when they are met by armed groups. After these confrontations the women are taken to temporary shelters in nearby but remote forests. From this, they are repeatedly gang raped by the armed groups, far away from where the remote towns they live in. Alongside this, another location pattern has emerged concerning the placements of military barracks relative to these towns and villages. This proximity helps facilitate the attacks and plan the more accordingly. Those committing the acts know that the man are living in fear of being tortured if they intervene, therefore most of the women are travelling unaccompanied by a male partner, leaving them at their most vulnerable.

Alongside the mass rape, women who are captured when walking alone are often subjected to further mistreatment, including permanent sexual slavery. When these women are captured they are forced into a ‘traditional’ role. This results in them being forced to cook, gather fire wood and collect water for their capturer. Many of these women would eventually flee and make their way to refugee camps for safety where they told their stories. A very common theme was the conceiving of children. One woman stated that she was forced to have many children there but managed to escape shortly after her last born child. Others however, were not so lucky. In another case, one woman claims that she not only became a sexual slave and beared children but that she never got the opportunity to escape, she was compelled to stay to look after them.

Abductions have an ethnic element to them as opposed to just a sexual one. In Jonglei, abductions of women and girls were a reflection of the ethnic clash between differing pastoral communities. For example, Nuer women were often captured by Dinka men because of their ethnicity. In these cases, the women are again forced into sexual slavery and to bear children. In cases where these women managed to escape with their children, the Dinka men would often capture the child back from them shortly after. Because of a fear of retaliation and further sexual violence, these new mothers were forced to abandon their newborn children if they wanted to escape.

Many women who were captured were not only raped or held captive but also sexually assaulted with foreign objects that resulted in serious injuries and even death. These injuries would often result in severe internal bleeding and loss of conciousness with many women waking up to the foreign objects still being in place, but her attackers would be gone.

One woman details horrific inhuman treatment. She claims that after being gang raped all night that she was dragged through thick bushes and thrown against tree stumps on the floor, causing serious physical injuries. Many of these injuries left her with deep scars still visible today. Other women claim that they had been held down in uncomfortable positions and struck hard repeatedly against various hard objects and surfaces, resulting in broken and fractured bones, severe bruising and muscular damage. These kinds of attacks exacerbated previous injuries that the women were recovering from. One such instance was a woman who was recovering from major abdominal surgery, causing the sexual assaults to be far more painful.

Unwanted pregnancies are sadly a very common occurrence of forced unprotected rape and sexual assault. Given the nature of the womens capture, they were not able to seek medical attention such as morning after pills to prevent pregnancy. Even if they could, they become ineffective after a few uses within a short period, meaning they would stop working over even just a short captive period. Many young adolescent girls became pregnant and because they had not fully developed, child carrying and bearing was far more traumatising than it would be for a fully grown woman. Because of this, they suffered life long injuries.

Fear over STI/Ds was a major concern. There were worries of the contraction of HIV/AIDS from the rapes. One woman describes how a group of 8 women, her included, became HIV+ after a series of rapes during capture. Since many women did contract STI/Ds, their children would often be born with health complications that resulted in total abandonment, putting them in a single carer situation with little support. One woman states:

“When my husband heard what happened to me, he said he was leaving me, that he could not be with me anymore because he did not want to get diseases. He left me and the children, and he is not support us…I am struggling to feed the children.”

Accountability for these actions ultimately falls on the judicial system of South Sudan, yet there are a number of barricades the courts face. The Court, police and prison systems are all chronically under-resourced. Many government employees noted that they had not been paid for several months and were even forced to pay for basic office supplies such as paper so they could do their job.

In 2020, South Sudan made a positive stride with the opening of a specialised court designed to handle gender-based violence. The OHCHR notes that this effort is an important demonstration of the enacting of the duty to investigate South Sudan is obliged to perform. However, there are two persistent issues regardless of this positive move. First, a single specialized court without sufficient funding will find it extremely difficult to function according to scale. For example, there are thousands of victims all with complicated situations and various perpetrators, therefore, the court must be in a position to adjust to this scale. If it cannot do this, then it could be many many years before any of these women see any justice. Second, the financial investment the judicial system requires is vast and currently not supported. A system of sustainable funding is required of the GoSS yet they have not demonstrated they can provide this, currently they rely almost entirely on donations. There is additional funding for specialized police units who deal with gender-based violence often located by “One Stop Centres”. These centres offer physical, mental, psychological and medical support for female victims of gender-based violence.

Again in 2020, a military court was established in Central Equatoria which ended up prosecuting 28 soldiers for committing rape and sexual violence against women. This development is positively welcomed as a great step into ensuring accountability for the victims.

Article 7 (g) refers to the following:

There is clear evidence that rape, sexual slavery, forced pregnancy and sexual assault when assessed as a comparable act have taken place and are of a widespread and systemic nature. Armed groups in South Sudan have systematically targeted women with malicious sexual intent as well as continued this in the form of prolonged slavery and forced pregnancies. No conclusion other than a severe violation of Article 7 can be made.

2022-04-17
Sam Biden
Previous: Was the use of drone strikes by the Obama Administration racialised?
Next: Freedom To Dissent – Russia’s ICCPR Violations After Anti-War Protests