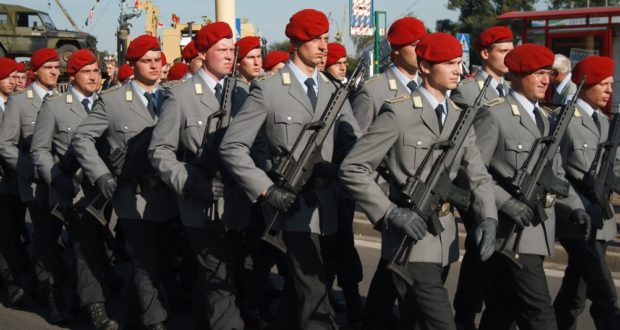 Despite being the dominant political power in Europe—and sometimes accused of acting overbearingly in that role—Germany has not played its part in NATO for many years. The reasons are manifold and have to do with the complex relationship between the Germans and any kind of military action since World War II. Nevertheless, the necessity to contribute to a common security structure cannot be denied by the strongest economy in the European Union. And yet, Germany has given up on the Alliance’s two-percent spending target.

Konrad Adenauer, West Germany’s first post-war Chancellor, made it one of his main objectives to integrate his country into the Western political and military architecture while sacrificing diplomatic relationships with the East. In 1955, West Germany was allowed to join NATO. In the following four decades, German governments earned the trust of the country’s partners, most prominently the United States, which ultimately led to them agreeing to Germany’s unification, making it the central power state on the European continent.

Because of its history—and more recently Angela Merkel’s diplomatic style—Germany assumed the role of the main mediator in terms of East-West relationships. To this day, if Russia listens to any of the major European powers, it is Germany. Russia has not found its place in the international security architecture post-1991. That is why Berlin has been so important in communicating with Moscow and taking Russian needs seriously. Germany’s geographical position as well as its rather open-mindedness towards Russia have been a significant advantage.

Through Germany’s reliability on the diplomatic carpet, the country increased its political importance and has been in a leadership position at many negotiation tables. But that kind of power usually has a price in the form of a parallel military capability. Yet, Germany avoids increasing its military budget and is on its way to only spending one percent of gross domestic product on defence instead of the expected two. Meanwhile, ambitions are as high as they could be.

Germany and its main partner France do not seem fond of Europe’s military dependency on the United States. The latest major example of said dependency was the intervention in Libya, where France had to ask for help from the United States, particularly in terms of intelligence, after only 48 hours. The French are not shy about their military aspirations and want to portray themselves as a major player, though reality tells a different story.

Both Merkel and Emmanuel Macron have endorsed a “European army”. On 22 January this year, the Aachen Treaty between the two countries promised to develop the “efficiency, coherence and credibility of Europe in the military field”. It is far from the first time that Europeans have considered joining up militarily, but how the cooperation could be executed usually remains a mystery. “Europeans still seem better at producing bureaucracy than battalions,” The Economist commented earlier this year.

The “Culture of Restraint”

Moreover, Germany’s strategic culture could hardly be more different than France’s. Cultivating a “culture of restraint” since World War II, the country is sceptical towards military interventions in general. Plus, French and German security priorities are vastly different. France looks south and Germany looks east; and the intensity with which both approach their security priorities differs. France perceives a real threat; Germany does not. In defence terms, this means that Paris emphasises crisis management and foreign operations far more than Berlin.

Germany’s reluctance to engage in military operations has led to disappointment, if not exasperation, in Paris. When it comes to defence, France largely feels left alone by its most important political partner. At times when French armed forces suffer from severe overstretch—due to international operations but also the large-scale anti-terrorist Operation Sentinelle on national territory—France is, indeed, in greater need of partners than ever. Yet, hopes triggered by Germany’s new discourse on security and defence since the Russian annexation of Crimea in 2014 notwithstanding, Berlin is far from being the kind of support Paris is looking for.

That kind of reluctance has recently been the topic of criticism in German politics. “The coalition between Christian and Social Democrats has nickelled and dimed the Bundeswehr to death,” the military expert from the German Free Democrats, Alexander Graf Lambsdorff, commented. “As a kind of free rider the federal government tries to muddle through regarding foreign and security policy. By that, it does not only damage the country’s ability to defend, but it also hurts Germany’s reputation as a reliable partner in international politics.”

Therein lies the major issue. Germany wants to set the agenda in Europe, yet it does not commit financially and therefore support a modernisation of NATO through fair burden-sharing. In February, Merkel promised at the Munich Security Conference to increase Germany’s military spending to 1.5 percent of GDP by 2024. But only one month later, Merkel’s cabinet moved forward with a budget proposal which included a decrease from 1.37 to 1.25 percent for this year, which caused harsh criticism by Richard Grenell, the US ambassador to Germany.

That being said, money alone does not solve NATO’s issues. In order to make the alliance ready for the challenges of the 21st Century, the member states have to agree on a renewed strategy. The current plan was penned in 2010, meaning before the Russian annexation of Crimea. What may make Germany just like other European countries hesitant right now is the fact that Donald Trump sits in the White House and is perceived as hostile towards the Europeans when it comes to foreign and security policy. That is why Germany’s leadership is more important than ever. The Bundeswehr has proven on a smaller scale that it can shoulder responsibility, e.g. in regards to Baltic Air Policing. But now is the time for Germany to commit financially and give up its reluctance.