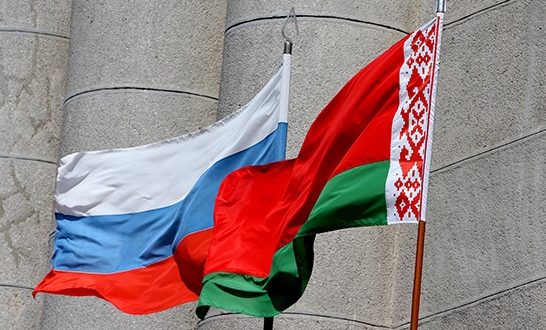 On 7 February, President Vladimir Putin of Russia and President Alexander Lukashenko of Belarus teamed up for a game of ice hockey following a summit between the two heads of state earlier that day. The game is likely to have been seen as a chance to show the world that the two presidents, and two countries, remain on the same side amid a turbulent few months. Despite this showing of unity, however, relations between the two states have cooled significantly following Moscow’s renewed push for the integration of Belarus into a unified state with Russia, and the failure of the 7 February summit to achieve any real progress. This is indicative of the current fractured nature of ties between the two states.

The push for integration

On 8 December 1999, the ‘Treaty on the Establishment of the Union State of Belarus and Russia’ was signed in a bid to create a Soviet-like federation between the two states. The Treaty envisaged a common head of state, constitution, currency and legislature, although both states would maintain their own sovereignty. While the Treaty was ratified by the Russian State Duma and the National Assembly of Belarus shortly after its signing, both sides gradually lost enthusiasm for the integration project. Customs controls were restored in 2001 and subsequently little was achieved in the way of bringing the integration of the two states any closer to reality. Following the collapse of the Soviet Union many Belarusians were opposed to the idea of once more being a subject of Russia, while the Kremlin began to focus on other potential avenues of geopolitical integration such as the Eurasian Economic Union and the Commonwealth of Independent States.

However, in late 2018, Russia reignited the push for integration, insisting that Belarus should assent to the integration of the two states in return for Moscow’s continued economic support. The Kremlin initiated a contentious reform on Russian oil taxes in 2018 and had promised to provide tax breaks to Russian oil refineries to prevent domestic fuel prices rising. Minsk insisted that Belorussian refineries should be entitled to the same subsidies, however the Kremlin made clear that future economic relations between the two states would be conditional on pursuing closer integration. Lukashenko agreed to negotiate the issue, however he has repeatedly stated that he will not allow Belorussian sovereignty to be violated by any integration process.

Two summits between Lukashenko and Putin were subsequently held in December 2019 in the hope of resolving this energy dispute and kick-starting the integration process. The first meeting was held in Sochi on 7 December and the second took place in St. Petersburg on 20 December. Despite former Russian Minister of Economic Development Maxim Orsehkin stating that an agreement was close following the Sochi meeting, Putin failed to entice Lukashenko to reignite the integration process. Both sides remain some distance apart on oil and energy issues, while joint governing bodies and the conception of a unified customs and tax system provided additional sticking points.

With no breakthrough in December, Russia halted oil supplies completely to Belarus forcing Minsk to search for alternative, more costly suppliers such as Norway. In a bid to resolve the situation, another summit between the two heads of state was called for 7 February. Lukashenko stated that he sought to maintain strong relations with Belarus’ ‘brotherly nation’, however he also said that he would not ascent to the Kremlin’s integration plan which threatened to bring Belarus to its “knees the Byzantine way.” Consequently, with both sides still a significant distance apart, the February summit ended in much the same manner as the December meetings: with the energy dispute unresolved and bilateral relations in an even worse state than before.

Where does Belarus go from here?

The failure of these summits to reach any form of compromise has put Minsk in a difficult position. Lukashenko has resisted undergoing market reforms over the past few decades due to energy subsidies from Moscow, while Belarus maintains a high dependence on Russian markets for its exports with much of the country’s industrial and agricultural production heading east into Russia. With the Kremlin now nullifying these energy subsidies, this asymmetrical relationship grows increasingly problematic for Belarus. It is reported that Belarus could incur losses of roughly $9 billion by 2024 as the price of Russian oil rises; and with economic growth slowing significantly to just 1% in 2019 the Belorussian economy may contract in 2020.

As a result, Lukashenko has resorted to a tactic he has utilised repeatedly during previous spats with Moscow and has attempted to cultivate stronger links with the West. Despite still being recognised by many as the “last dictator in Europe”, Lukashenko has engaged with both the U.S. and the EU in recent weeks in an attempt to secure new economic partnerships. Negotiations regarding oil deliveries have already transpired with the EU, and Lukashenko has stated that Belarus will now acquire oil from Gdansk. Additionally, Lukashenko met with U.S. Secretary of State Mike Pompeo in the first visit of an American secretary of state to Belarus in almost three decades. While Pompeo ruled out lifting U.S. sanctions on Belarus at this time, he proclaimed that the U.S. would be willing to provide Belarus with all the oil it needed at competitive prices. Such a statement is indicative of the United States’ support for Belarus as it refuses to cede sovereignty to Russia and is undoubtedly a big boost for Lukashenko at this stage.

However, any oil purchased from western suppliers will cost significantly more than the oil Belarus was previously receiving from Russia and this will have a significant impact on the Belorussian economy in the years to come. It is, therefore, not a long-term or profitable solution for the state and Lukashenko will feel increasing pressure to re-enter negotiations with his eastern neighbour in the future.

Belarus therefore faces an increasingly uncertain future. Public opinion in the country is strongly against the integration process. According to a survey by the Institute of Sociology of the National Academy of Sciences of Belarus, just 7.7% of those polled would support the full entry of Belarus into the Russian Federation and Minsk witnessed rare protests in December 2019 as Putin and Lukashenko held their summits. Lukashenko has publicly stated that he will not let Belarus enter any unified state as anything but equal partners with Russia and has frequently stated his commitment to preserving Belorussian sovereignty.

It is, therefore, likely that in the coming months and years we will see Belarus continue to source its energy requirements from a wider set of partners and creditors while simultaneously attempting to reform its economy and decrease its dependency on Russia. Moscow will believe that Belarus will struggle to tolerate the increasingly high prices it will pay for alternative sources of oil and will come back to the negotiating table in the near future. But for now, the integration process has been put on hold indefinitely and with relations between the two states entering a more pragmatic phase, Lukashenko will likely enhance his efforts to build further bridges between Belarus and the West.

Image: the flags of Russia and Belarus (Source: mil.ru via CC BY 4.0)

2020-03-03
Hamish Cruickshank
Previous: The Syrian War and its refugees: Why Europe must act on the new crisis
Next: Kaliningrad: Russia’s Province in the Heart of Europe