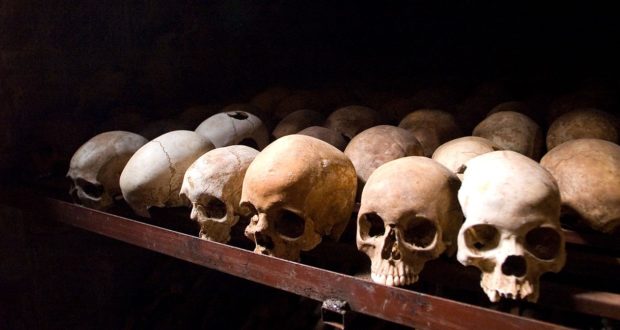 The Rwandan Genocide, 25 years on

April 2019 marked 25 years since one of the most horrific episodes of recent human history – the Rwandan Genocide.

Primarily occurring between April and July 1994, the Rwandan Genocide resulted in shocking numbers of fatalities – numbering between 800,000 and 1,000,000 people. Initially, the scale and types of crimes that were committed during the relatively short period stunned the world. However, in turn, the tragedies and shock became key catalysts in the redefining of international policy and procedures relevant to the prevention and response to crimes of genocide and crimes against humanity.

Whilst often tied to the death of the Rwandan President Juvenal Habyarimana on 6 April 1994, the Rwandan Genocide was in fact the by-product of decades of entrenched and far reaching ethnic and political tensions.

To this end, animosity amongst Rwandans was on the rise from 1916 with Belgian colonists requiring Rwandans to carry identity cards that described their ethnicity. The preferential treatment by the Belgian colonists of the minority ethnic group (Tutsis) over that of the majority ethnic group (Hutus) then further exacerbated the tension and divide between the ethnic populations. Markedly, a string of riots occurred in 1959 that saw more than 20,000 Tutsis being killed and many more fleeing to neighbouring countries for safety and refuge.

By 1962, when Rwanda gained independence from Belgian, violence was erupting between the ethnic population. Coupled with weak economic performance, these events fuelled political unrest and violence and ultimately resulted in the outbreak of a civil war which continued through much of the early 1990s.

In August 1993, as the result of efforts to abate the civil war, a Peace Accord was signed by the Government of Rwanda and the Rwandan Armed Forces. Despite being supported by the United Nations Security Council, the accord and associated cease fire were not long lived. A mere 8 months later, on 6 April 1994, the Rwandan President died following a surface-to-air missile attack on his aircraft.

Immediately thereafter, and until early July 1994, the extreme ethnic Hutu groups (which had formed during the civil war) encouraged and facilitated soldiers, gendarmes, politicians and ordinary citizens to commit heinous crimes against Tutsis and Tutsis sympathizers. In this regard, the United Nations approximates between 800,000 and 1,000,000 men, women and children were massacred by way of calculated and non-relenting violence of the extreme ethnic Hutus.

Accordingly, the United Nations Security Council established an ad hoc international criminal court – the International Criminal Tribunal for Rwanda (ICTR) – to “prosecute persons responsible for genocide and other serious violations of international humanitarian law [that were] committed in the territory of Rwanda and neighbouring States, between 1 January 1994 and 31 December 1994.”

In addition to the establishment of the ICTR, steps were also taken to clarify the circumstances of the events and strengthen response mechanisms. Notably, an independent International Inquiry was initiated to determine the facts and make recommendations regarding the United Nations’ response to the events in Rwanda. Furthermore, a Special Adviser on the Prevention of Genocide was ultimately appointed to the United Nations to raise awareness of the causes and dynamics of genocide, as well as identify and alert of risks of genocide and advocate appropriate actions.

Powerfully, these initiatives also contributed to a paradigm shift in international policy. To this end, the shortfalls of the international community in responding – both in terms of prevention and mitigation – to events such as the Rwandan Genocide, led to calls for the international community to determine when intervention was justifiable. Accordingly, following a reconceptualisation of the concept of sovereignty in 2001, it was established that all states bore a ‘Responsibility to Protect’ (R2P) populations from genocide, war crimes, ethnic cleansing and crimes against humanity when they arose. Significantly the reconceptualisation of sovereignty to incorporate positive measures – rather than simple defence – established a two-tiered obligation for states to protect not just their own populations, but also others that are at risk of genocide and mass atrocities.

This shift and the demonstrable success of the ICTR also fuelled the establishment of a permanent international criminal court, the International Criminal Court (ICC), to investigate and try individuals charged with gravest crimes of concern to the international community.

The horrific scale of fatalities and types of crimes committed in Rwanda in 1994, shocked the globe and rightly triggered powerful shifts in reform and practice for the international domain.

The practical by-products of these reforms demonstrate the power and capacity of communities – both domestic and international – to unite and reform in the wake of a tragedy. That being said, the success of the reforms and developments that flowed from the unification and reform equally evidence that such acts are not simple or burden free ventures.

The 25-year anniversary of the Rwandan Genocide offers a powerful and timely reminder of these lessons. Acknowledging this, and the current tensions and instabilities around the globe, the international community must avoid the shortfalls of the past. Critically, it should be recognised that behaviours and single decisions can drastically alter circumstances for the better and worse. Moreover, that the presence of difficulties and obstacles should not dissuade effort or initiative – but be seen as elements to potential great successes for unification and positive reform.