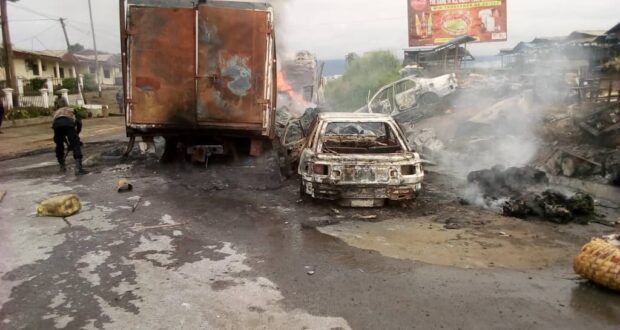 Since 2017, Cameroon has been plagued by a deadly conflict linked to the roots of early colonialism headed by the French and British governments, causing a conflict between the ‘new’ native languages of French and English. In total, over 4,000 civilians have been killed, with an additional 712,000 civilians being internally displaced, and a further 1.3m people in dire need of humanitarian assistance. Between 1919 and 1961, the North-West and South-West regions were under British control, but a UN intervention in 1961 created a new unified British-French jurisdiction. Despite this unification, English-speaking regions cited continual discrimination and exclusion due to their language preferences, eventually causing mass protests in Anglophone regions in 2016, escalating into a full-blown civil war by the following year.

The 2016 protests spawned off the back of a peaceful campaign from lawyers and teachers from the Anglophone region. They claimed feelings of neglect and marginalization because of their native tongue. They also claim that the appointment of francophone teachers, prosecutors and judges has been impeding their ability to speak their own language in public settings. The protests were met with a violent backlash: government forces cracked down on protestors with tear gas and have been accused of assaulting many. Additionally, in Francophone regions such as Douala, only French can be spoken when accessing public services, resulting in anglophone speakers feeling disenfranchised in both Anglophonic and Francophonic regions.

Negotiations were opened between the Cameroon government and protestors in 2017. The protestors refused to engage until those arrested during the protests were released, yet the Cameroon government claimed they were a threat to security. As negotiations continued to fail, separatist armed movements would spawn. The Ambazonia Governing Council (AGovC) launched attacks with their Ambazonia Defence Forces (ADF), initially killing three Cameroonian soldiers during a raid against a military base in Manyu. The ADF later initiated two bombingsagainst government forces, only one of which was successful.

The fight for the independence of the Anglophone Ambazonia region would gather momentum in October 2017 as a new unilateral movement of separatists known as the Southern Cameroons Ambazonia Consortium United Front (SCACUF) surfaced.

Separatists are building major support in Anglophone regions, drafting a plan to preach to the international community for support. Ultimately, separatists hope that in the event they can gain enough support from Southern Cameroonians for their plea to the international community for independence may be heard more clearly. Meanwhile, the Cameroon government is trying to ensure that an ‘intercommunal’ war in the state is not a possibility. Despite their efforts, the UNHCR has already deemed many violent instances as evidence for an ongoing intercommunal war. As support for Anglophonic points of view increases, the stability of the currently contained war seems bleak.

As a result of the continuing expansion of the conflict, a predicted 358,000 Cameroonians have fled the ongoing conflict as well as increasing climate hazards and the spread of cholera and measles.

The Centre for Human Rights and Democracy in Africa (CHRDA) was originally founded under the title of Centre for Human Rights and Democracy in Cameroon (CHRDC) in 2005. It firstly aimed to engage civil society with the Cameroonian government due to the rise of state instability yet has since expanded to handle other African states such as Sierra Leone, with regional offices in the US as well. As a research facility, they aim to provide advocation and solutions to human rights issues afflicting the African continent. This includes research into ongoing violations (specifically those of the ongoing conflict), advocation for human rights respect and incorporation as well as producing reports on ongoing crises in Africa.

In their groundbreaking report on Cameroon, they noted major human rights violations by both government forces as well as separatist forces.

It has been claimed that both Cameroon’s Defence Security Forces (DSF), as well as the Rapid Intervention Battalion (BIR), have been involved in looting, murder, massacres, and enforced disappearances.

On April 22 2022, the DSF killed three men in Njenka Bali. The attack came as an attempt was made to force any separatists away from committing a potential attack by the DSF. The shots fired were allegedly random, hitting and killing the three men by accident. This narrative is tough to swallow given violent DSF raids in the area the day prior, supposedly as retaliation against separatist attacks.

On June 1 2022, the DSF stormed the village of Missong in the subdivision of Menchum in the North-Western region. They summarily executed 9 civilians during the raid including four women, four men and a one-year-old child. Head of DSF Communications, Captain Cyrille Serge Atonfack Guemo, claimed that the soldiers responsible had been arrested and were to stand trial for their crimes, yet no new information as to the status of each case has been made public.

On June 9 2022, two people were executed by the DSF during an offensive operation in the Boyo area of the North-Western region. Witnesses claim that at around 3:00am, a silent operation began in the area as soldiers picked up a group of young boys returning home, with one of these boys being a former separatist fighter who was recovering from gunshot wounds sustained by other military operations. 10 military trucks then moved towards a separatist camp in the Boyo area and removed an elderly separatist fighter named ‘Bo Luh’ and summarily executed him. Bo Luh was accused of making ‘Odeshi’ for separatist fighters, a charm that is supposed to make the recipient ‘bulletproof’

During the Boyo incident, DSF soldiers ransacked and burned down health clinics, a protected civilian object. They looted store sheds for electronics as well as food storage and provisions, clearing out many stores in the area. Out of all stores in the area, only one was spared, supposedly due to a disability poster on the door stating the owner was physically disabled.

On April 21 2022, the DSF set houses and bikes alight in the Konye subdivision in the South-West. The raid took place in Matondo II. DSF soldiers pursued bikers who they believed, albeit without due suspicion, to be separatists. After following the bikers into the village, they burned down houses and destroyed the bikes, many residents testified that they suffered huge material losses due to the attack.

On April 24 2022, the BIR was caught on video detaining several civilians in the North-Western region of Oku. The civilians in question are allegedly bikers involved in the separatist movement: they were intercepted by a BIR escort. Testimonies state that the bikers were immediately halted and forced to show their ID cards to the BIR agents. The bikers were separated into two groups, those with dreadlocks were separated and allegedly tortured by military personnel. 40 of the bikers were beaten with hammers and were then transported to an undisclosed location. On May 18 2022, information came to light that 24 of the 40 bikers who were forcibly disappeared had been brought before a military tribunal in Bamenda.

In recent months, non-state armed groups have been similarly responsible for violent war crimes as well as the wanton destruction of civilian objects.

On June 7 2022, armed separatist fighters led by one ‘General No Pity’ launched an operation in Njitapon at the border between North and West Cameroon. General No Pity has become a prominent separatist figure in the ongoing conflict. He currently commands both the separatist factions of Bambalang Marine Forces and Bui Unity Warriors as well as serving in the Ambazonia Restoration & Defence Forces. The Anglophone region was typically targeted yet this attack was launched against the Francophonic areas. Armed men stormed Njitapon and attacked the military base hosting the Groupement Polyvalent d’Intervention de la Gendarmerie (GPIGN), a French military force. Five officers were killed during the attack with a further two others bring injured. The armed separatists continued on and burned down the military base, including the bodies of the deceased.

The June 7 attack raises major concerns regarding territorial spillover of certain attacks. It appears armed separatist fighters are now beginning to expand their operations away from a strictly Anglophonic approach to a dual-linguistic targeting method. This rise in potential targets could potentially lead to a full-blown civil war within the state as a whole rather than being restricted to the Anglophone regions only. If this is in fact the case, both government forces and non-state armed groups will clash across the whole of Cameroon, dramatically worsening the safety of civilians and increasing the death toll significantly. Despite these concerns, the June 7 attacks are permitted by international law as only permissible targets were selected during the attack. However, this aspect cannot be guaranteed if and when the inevitable spillover occurs.

On June 8 2022, the Mamfe District hospital was razed to the ground, including all equipment, materials and resources. The attack left a total of 85,000 people without any immediate access to medical treatment, having to travel into other districts to receive basic medical necessities. While the perpetrators were initially unidentified, witness testimonies all corroborate that the masked assailants were armed separatists. Government forces were able to safely evacuate many of the patients from Mamfe District hospital and transport them to other health facilities in the area for shelter and treatment. After burning the hospital, the masked men advanced on private residences and burned them down as well. During this, they abducted an innocent bystander and required 10m FCFA (£13,000) for his release.

Other hospitals have been similarly affected by the conflict. Both the Kumba District hospital and the Muyuka District hospital were attacked and burnt to the ground just 3 years prior, leaving thousands of patients with no immediate medical access.

Both government forces and armed groups have shown a consistent ignorance towards the safety of the civilian population and civilian objects. The linguistic turf war has begun to overspill from the previously contained Anglophone region into neighboring areas, putting a major refugee crisis on the table. Currently, neighboring Nigeria is the closest state that offers the potential for major refugee traffic from the Anglophone regions, yet if this overspill does continue, both the Central African Republic, Chad and Congo could see a large wave of refugees fleeing the spreading conflict.

In order to contain this overspill and to protect any further destabilization of the African continent, all parties to the conflict must collectively agree to: