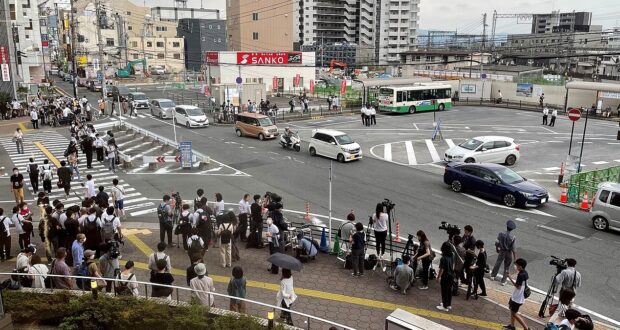 On 8th July 2022, former Prime Minister of Japan Shinzo Abe was assassinated whilst giving a campaign speech in the city of Nara. His murder has sent shockwaves throughout Japan and the international community. International leaders expressed shock and condemnation at the killing.

This event has drawn comparisons to the assassination of then-President of the United States John F. Kennedy in November 1963 in terms of social impact in Japan from former Abe advisor Tomohiko Taniguchi. Initial reports indicated that Abe was shot with a homemade firearm resembling a shotgun. What makes this event particularly unprecedented is the rarity of violent crime in Japan. The suspect, Tetsuya Yamagami, was arrested at the scene. It is believed that Yamagami targeted Abe as he believed Abe had connections to the South Korea-based Family Federation for World Peace and Unification (or Unification Church), a religious organisation. Based on evidence including Twitter posts from October 2019, Yamagami appears to have held the Unification Church responsible for his family’s financial difficulties.

While homicide is rare in Japan, a series of serious incidents have taken place in its post-war history. Perhaps the most notable is the 1995 sarin gas attack on the Tokyo subway committed by the doomsday cult Aum Shinrikyo. There was also the 1970 coup d’état attempt by Yukio Mishima and his “Shield Society”. While these previous acts of terrorism in Japan were for the most part orchestrated by organised, homegrown groups, it appears that Abe’s assassination is more reminiscent of lone-wolf terrorism which has been encountered in the West. But what exactly are the wider ramifications of this event for Japan?  Will authorities view domestic terrorism in a different light?

Such a shift would represent what the Copenhagen (CS), Paris (PS) and Aberystwyth (AS) schools of security studies refer to as ‘securitisation’: the “discursive process through which an intersubjective understanding is constructed within a political community to treat something as an existential threat to a valued referent object, and to enable a call for urgent and exceptional measures to deal with the threat”. Usually, securitisation is enacted through the execution of a speech act, which frames a particular issue as an existential threat. The CS also identified the combination of different securitisations: macrosecuritisations. The second generation of securitisation work is mirrored in both the PS and AS. The PS has critiqued the original CS conceptions of securitisation, drawing inspiration from scholars such as Pierre Bourdieu: one example is the PS scholar Didier Bigo’s application of concepts such as security “fields”. While disagreements between these schools have manifested in the scholarship, there have been initiatives geared towards finding common ground. Since the late 2000s, a third generation of securitisation work has emerged, typified by the observation and analysis of a new trend: counter-securitisation, whereby the subjects of securitisation can respond through securitizing moves of their own. Whilst foreign policy issues such as those surrounding China and North Korea have been afforded this treatment, the assassination of Abe may well lay the groundwork for domestic terrorism to be approached in a similar fashion.

The Japanese government publishes its White Paper on national defence on an annual basis, with copies of this document available in English, Japanese, and Chinese. The main threats outlined in the 2016 White Paper, for example, are summarised as follows: 1) North Korea, with its continuing nuclear weapons development programme and ballistic missile launches; 2) China, reflected in its massive increase in military budget since 1988 and increasing tensions with Japan over territorial disputes; 3) Russia, given Russia’s involvement in the Ukraine crisis from 2014, its military intervention in Syria from 2015 and the ongoing Kuril Islands dispute with Japan; and 4) international terrorism, as mirrored in the emergence of the Islamic State of Iraq and the Levant (ISIL). Specifically international terrorism, and not domestic terrorism, is featured prominently in each White Paper until 2021.

The 2022 White Paper, on the other hand, scarcely makes any reference to terrorism as a threat. Instead, China and Russia appear to have become the chief topics of concern, with the former’s “civil-military fusion”, its “military intelligentization” and increasing military expenditure duly noted, while the latter’s February 2022 invasion of Ukraine is considered under the umbrella of “Unilateral changes to the status quo by force shake [sic] the foundation of the entire international order, including Asia”. Should domestic terrorism be included in the 2023 White Paper, then this would constitute a speech act and subsequently mirror a potential securitising move. However, this is merely a speculative line of argument concerning a single document. For the time being, we can gain a much clearer picture of what form this securitisation would take from what has already been said and done since Abe’s assassination.

The securitisation of domestic terrorism in Japan commenced almost immediately following the event, and this much is obvious from the discourse which has emerged. LDP Secretary-General Toshimitsu Motegi, after having initially wished Abe a speedy recovery on his hospitalisation, went on to refer to the attack as “an act of terror” and “a challenge to democracy”. This could be considered a classic speech act for two reasons. First, by using the word ‘terror’, Motegi is emphasising the fact that this is no ordinary murder and is placing it within the paradigm of a security issue: terrorism. Second, by asserting that Abe’s assassination is “a challenge to democracy”, Motegi is introducing what is called a “referent object”- what is apparently being threatened. Motegi’s decision to include this particular referent object, “democracy”, is also significant given the wider socio-political context. Japan continues to be recognised as one of Asia’s longest-standing democracies, and Japan’s adoption of democracy after its defeat in the Second World War has profoundly shaped its post-war national identity. What is also significant is that Abe was Japan’s longest-serving Prime Minister. Abe’s assassination can therefore be framed not only as an attack on a specific individual, but also as a direct challenge to Japan’s very quest for a coherent position in the contemporary global system.

The challenge to democracy” component of Motegi’s speech act, wherein democracy is treated as the referent object, can be identified in speech acts executed by other, non-LDP figures, ranging from Tokyo Governor Yuriko Koike to Osaka mayor and Japan Innovation Party (JIP) leader Ichirō Matsui. Koike, for example, stated: “Whatever the reason, such barbaric acts cannot be tolerated. This is a challenge to democracy, and I am furious”. Matsui also treated democracy as a referent object: “Democracy is formed through debate and gaining the support of the people. Whatever anyone’s opinion may be, we will never tolerate the suppression of speech through violence. This is a challenge to Japan’s democracy and is a destructive act”. Matsui’s referral to not just democracy, but specifically “Japan’s democracy” is also significant as this could generate a different response from the intended audience, whose acceptance of a speech act is a vital precondition for a speech act to succeed.

Current Prime Minister of Japan Fumio Kishida himself has performed relevant speech acts since Abe’s death. These are most visible in a speech he gave to a press conference. Kishida gave a recap of recent events, including the LDP’s election victory, the Ukraine crisis and, naturally, Abe’s assassination. Briefly outlining Abe’s achievements and the background of his death, Kishida performs at least two speech acts. The first includes an account of his abilities and achievements, before Kishida emphasises that Abe’s death came due to “an act of abrupt barbarity, which occurred whilst elections, the core of democracy, were being held”. Again, democracy (more specifically, its “core”) is being treated as the referent object.

Kishida’s second speech act links to a course of action intended for the protection of a certain referent object: the announcement of a state funeral for Abe in Autumn. Kishida’s justification for Abe receiving a state funeral is as follows: “By conducting a national funeral, we will memorialize the former Prime Minister Abe, and we will show the determination that Japan will not succumb to violence and defend democracy”. Here another significant referent object appears: Japan itself.

Furthermore, high-ranking police officials, it can be observed, have also laid the foundations for a new securitisation discourse vis-a-vis domestic terrorism. At a press conference on 9th July, Nara Prefectural Police chief Tomoaki Onizuka admitted that there were security-related issues which may have contributed to Abe’s assassination: “Whether it was a matter of preparedness, positioning, emergency treatment or the ability of individual personnel, we will immediately investigate and review various matters pertaining to what happened”. The proposal of such measures by Onizuka mirrors a speech act facilitating securitisation in consolidating “the audience’s support toward a policy or course of action”.

In terms of long-term ramifications, it has been suggested that Abe’s death will mobilise and continue to push for policies championed by Abe during his lifetime: the revision of the Constitution’s Article 9, which prohibits the deployment of Japan’s military on foreign operations and, at one time, the very existence of Japan’s military. There is also speculation that Abe’s death may provide Kishida with additional leverage in pushing for the implementation of policies such as constitutional revision.

What the PS refers to as regular, everyday security practices, routines and regulations (take surveillance in the context of migration in the EU, for example), could well be shaped in the near future by the emerging discourse. Tightened security and policing measures could change profoundly. With the ongoing COVID-19 pandemic and the Japanese government having only terminated a state of emergency in March 2022, Abe’s assassination at such a time could affect Japanese law in multiple ways. Existing laws such as the Firearm and Sword Possession Control Law of 1958, which was revised in 2008, could be tightened even further. Furthermore, a 2017 anti-terrorism/conspiracy law passed under the Abe administration could be affected in the same way – this law has already drawn concerns over the undermining of individuals’ constitutional rights through potential violation of their privacy.  Constitutional revision, as made famous in the academic discourse of Japanese studies by controversial attempts to revise Article 9 of the Japanese constitution, could also potentially be included in this category. On the second level, new laws could be introduced, and old laws abolished – an outright ban on firearms would constitute such an example. Both scenarios in turn would have considerable impacts on Japanese society – more stringent policing and security practices such as the monitoring of private communications to wider application of capital punishment, which continues to be practised in Japan. On this note, regular discourse is already very much embedded in normal security governance in Japan.

By no means does this equate to domestic terrorism replacing North Korea and China as key areas of concern in Japanese security thinking. U.S. House Speaker Nancy Pelosi’s meeting with Kishida occurred very soon after her controversial trip to Taiwan, amidst fresh Chinese military manoeuvres in Taiwanese waters. Likewise, Japan views the ongoing war in Ukraine with the utmost concern. However, given the attention generated by Abe’s assassination, it may not be surprising that the 2023 White Paper would give a much more conspicuous mention of domestic terrorism as an existential threat. What has become clear, however, is that an entirely unprecedented event has led the Kishida administration to face an epistemological insecurity which could well shake Japan and its very post-war identity as a democratic, pacifist state to the very core.