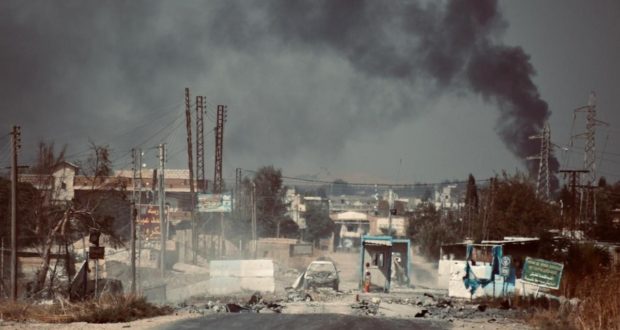 What Turkey hopes to achieve with a Safe-Zone in Syria

Part I: The Concept

The idea of creating a safe zone in Syria for refugees and the internally displaced is not a new one. However, only now has any large-scale step been taken towards its implementation. On 9 October 2019, the Turkish military crossed its southern Border into predominantly Kurdish-controlled northeastern Syria.

The latest iteration of this concept was presented by Recep Tayyip Erdoğan, president of Turkey, to the 74th General Assembly of the United Nations on 24 September 2019. He held up a map of the area in question and laid out his plan; a 32km (20 mile) deep safe-zone, stretching from Syria’s eastern border to the Turkish-controlled northwest border region, some 480 km (300 miles) long, with the capacity to host up to two million Syrians once Turkey takes military control, and up to three million if the size of the area were to be increased.

The Turkish state broadcaster TRT also presented a cost of 151 billion lira ($27 billion USD). Justifying this move, Vice President Fuat Oktay said: “in the safe zones we create, we have made sure the conditions to live like humans are met and will continue to do so,” referring to previous successful military operations into Syria’s northwest where services have been restored and infrastructure rebuilt. The ultimate aim is to create a so-called “peace-corridor” which would allow Syrians to return to their own country. However this same area has not remained untouched by war and the United Nations states the area is home to 2.2 million people, 1.3 million of which are in need of humanitarian assistance.

In August, the United States and Turkey had previously discussed the idea of a “security mechanism.” Similar to the concept of a safe-zone, the security mechanism would have been a way to create an area free of Kurdish YPG fighters, though the size of the area and which state(s) would control it split opinions.

Despite the groundworks having been laid for a cooperative effort, when Erdoğan informed United States President Donald Trump of Turkey’s imminent advance into Syria, Trump informed the former they would be doing so alone. The United States later retreated its 1,000 strong force in northern Syria, creating a vacuum which was filled by Syrian government forces by the invitation of the Kurds.

Not a new idea

The idea of a safe zone dates back much farther than August. In 2016 German Chancellor Angela Merkel called for a safe zone in Syria for refugees, describing them as “zones where the ceasefire is particularly enforced and where a significant level of security can be guaranteed.” Then-US president Barack Obama was skeptical of this idea, saying “sadly, it is very difficult to see how it would operate short of us essentially being willing to militarily take over a big chunk of that country,” which incidentally seems to be Turkey’s long-term objective.

In 2015, while campaigning for his presidency, Donald Trump also brought up the idea of safe zones and again in 2017, saying “we will absolutely do safe zones in Syria.” Obama had resisted this idea as he feared the United States being dragged into the conflict might result in unintentional incidents between them and Russian forces. On the other hand, certain opportunities to address the humanitarian crisis may be presented if the implementation process is properly carried out.

Turkey hosts 3.6 million Syrian refugees, two million of which it hopes to re-settle. Add to this an economic recession and a high level of unemployment, and it may be that Turkey has reached its tipping point. The director of the Turkish program at the Washington Institute said “The refugee issue is fast nearing a tip-over in Turkey… The impact of refugees on Turkish society could not be overestimated, it’s the most significant demographic shift since the Greek/Turkish exchange of the 1920s. Southern Turkey has become 10 to 15% Syrian, and with the economy slowing down resentment towards refugees is rising.”

For four decades Turkey has been facing an insurgency by the Kurdistan Worker’s Party (PKK), which is allied with Kurdish groups in Syria. A priority for Ankara is to ensure that these groups do not become emboldened and grow in power. By re-settling two million Syrian refugees in Syria, Turkey is creating a buffer zone between its national border and the YPG, as was originally lined out in the Security Mechanism. While there is no doubt concerns over the PKK and YPG are a motive behind the implementation of the safe zone, Turkey paints a lighter picture, tying the move back to the well-being of Syrians; “It will allow them to live on their own lands (instead of) the tent towns and container cities… to return to their lands, and allow for all their needs, from education, health, shelter to be met.” Erdoğan stated, “Our mission is to prevent the creation of a terror corridor across our southern border, and to bring peace to the area.”

Addressing the demographic shift in the region, Erdoğan’s spokesman said “Turkey… has no interest in occupation of changing demographics. The PKK/YPG did that in northeastern Syria. Time to correct it.” Despite this, the International Crisis Group has analyzed that Turkey hopes to “tip the balance of power in Syria’s Kurdish areas” by clearing that space of Kurds and placing Syrians there. In doing so, Ankara would be changing the demographics by inserting Arabs in a strip of land, cutting off the two previously mentioned Kurdish groups, and weakening their positions against Turkey. The Syrian Democratic Council also accuses the move to be motivated by what it terms “Kurdophobia.” It is not only a demographic shift that is sure to occur, but also a displacement of Kurdish culture and rights.

The military operation creating the safe-zone would be included in has also been analyzed to be part of a larger power-play by Turkey to place the country on more equal footing with the United States, Russia and Iran, as an important geopolitical actor in the region. This would include Turkey in shaping Syria’s future. With economic hardships, demographic shifts, geopolitical considerations, and the continuing threat posed by Kurdish groups to Turkey, the implementation of a safe-zone in Syria presents an opportunity to address all these major issues at the same time.

Part III: Criticism on all fronts

While the concept of a safe-zone has been debated for years and some see potential, it is not without overwhelming criticism. The Syrians Turkey plans to relocate are Sunni Arab from western Syria, meaning the idea of them being in their home ignores existing demographic disparities within the country. This could lead to ethnic tensions and general instability. The move would have to be forced on the Syrians as they may not be willing to re-locate to the new area. Turkey’s main opposition party is also opposed to safe-zones, as they believe Syrian authorities should be responsible for any safe-zones within their own territory.

While TRT gave the number of $27 billion, as stated above, funding for this safe-zone has become a contentious issue. The European Union is providing Turkey with 6 billion Euros to help support refugees in its territory and is skeptical at supporting projects inside Syria until a deal is made to end the eight-year long civil war. A diplomatic source stated, “When you look at the length of the border and the Turks say they want a safe zone all along it… demilitarized, controlled by Turkey and then to put 3 million refugees there and get Europeans to pay $26 billion, it’s not going to happen. It’s not realistic and it’s pure fantasy.” Considering Turkey’s current economic hardship, and without international support, it is unclear where money to build needed infrastructure and provide humanitarian aid will come from.

The biggest concerns regarding the idea of a safe-zone are about the safety and well-being of the refugees who would be forcibly moved from their current locations in Turkey. The executive director of the Global Center for the Responsibility to Protect said, “All too often in the history of mass atrocities, [a safe zone] doesn’t become a safe zone, it becomes a dumping ground or makes civilians more vulnerable.” If it were safe, another concern is what the refugees would be occupied with, as one humanitarian worker stated, “Moving people in will be easy, but then what will they do? They will be exposed to harsh winter and summer conditions, there is no infrastructure and absolutely no economic opportunities.”

Despite concerns and criticism, Erdoğan’s government launched Operation Peace Spring on 9 October, targeting Islamic State and Kurdish elements. The decision to withdraw US troops from the area occurred on 13 October. On the same day, an agreement between the Syrian government and the Syrian Defense Forces created a channel through which the Syrian government could deploy along its northern border to counter Turkish advances.

On 17 October, an American delegation headed by Vice President Mike Pence visited Ankara to discuss Turkey’s anti-terror operation, which resulted in a 13-point agreement. Relevant to safe-zones are points seven, nine, ten, and eleven, which state:

On 21 October, in a visit to Sochi, Russia, Erdoğan and Russian President Vladimir Putin concluded another deal, which would see Turkish and Russian military forces jointly patrol the safe-zone area while Kurdish forces pull back 30km from the border. It is clear that Russia has taken advantage of the opportunity created by the United States by leaving, and jumped in to replace them.

As a result, Turkey, Syria and the Kurds all have hopes on what Russia would do that would benefit them. Considering Russia’s close ties with the governments of both Turkey and Syria, it would be detrimental to its influence in the region if the two neighbors engaged in active warfare against one another, a reason it claims for patrolling the area after suggesting Turkey should accept Syrian control of the region as per a 1998 security agreement.

Part V: The next chapter

With new developments every day, it is very difficult to foresee how a safe-zone could be established; Turkey and Syria are near open conflict, Russia is seemingly attempting to prevent this, and Kurdish fighters invited Syrian government forces to the north to face the common enemy.

Assuming Turkey does take military control of the area, it would need an amount of money larger than it can supply on its own to complete re-locate and ensure the well-being of the Syrian refugees which presents a variety of additional problems and concerns, especially considering the hesitation from the European Union and the United States to provide support. On the other hand, German Defense Minister, Annegret Kramp-Karrenbauer, recently proposed the idea of an internationally-controlled safe-zone, perhaps as a way to prevent Russia and Turkey from gaining more influence in the area.

As it stands, each actor involved will continue to look out for its own best interest while foreign powers weigh their options, extending this eight-year long conflict and merely beginning a new chapter, with or without a safe-zone.

2019-10-30
Oliver Hegglin
Previous: 2019 IAEA General Conference – Balancing positive trends and the realities of policy
Next: Putin emerges as the Tsar of Syria following US military withdrawal and Turkey’s onslaught against the Kurds