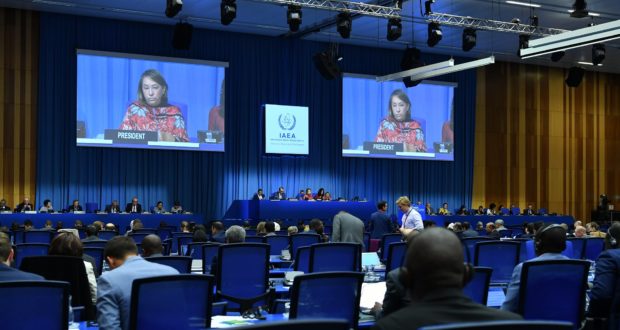 Highlights of the 2019 General Conference

By way of background, the IAEA was established in 1957 and is regarded as the “world’s central intergovernmental forum for scientific and technical cooperation in the nuclear field”. The agency currently has 171 Member States and numerous partners, which it works directly with to maximize and regulate the contribution of nuclear science to international peace, development and security.

The IAEA’s general conference occurs annually and is an important policy making forum for the agency. To this end, it is during the course of the general conference that the agency’s budget and agenda are set. It is also an event in which the agency delivers reports regarding its work and when other contemporaneous matters, such as nuclear safety and verification issues, are deliberated.

The 2019 general conference’s agenda reflected such hallmarks, and opened with introductory remarks by the IAEA’s Acting Director General (ADG). Markedly, the ADG’s remarks spotlighted an increase in the agency’s interaction and capacity to assist its Member States. They also shed light on obstacles and concerning events faced by the agency, which unsurprisingly included the nuclearisation of the DPKR and Iran’s shift away from its commitments under the JCPOA.

Reports regarding the agency’s diverse work, including its Annual Report for 2018, were also introduced and considered during the general conference. Delegates of Member States also engaged in the general conference by providing statements and voting on a number of resolutions. Positively, commitment to the agency and recognition of its important work were common themes in delegate’s statements. Moreover, the largest financial pledges to the agency’s technical and assistance programmes were made during the conference.

Support for the agency was also reflected in the adoption of an array of procedural and technical resolutions by Member States throughout the general conference. In this regard, resolutions to strengthen the agency’s activities related to nuclear science, technology and applications were adopted. Similarly, resolutions to improve the effectiveness and efficiency of IAEA safeguards and nuclear security were also approved. Notably, such resolutions denoted support for the agency to continue its “intensified efforts” to be ready to play its “essential role in verification” activities and urged all “States which have yet to bring into force comprehensive safeguards agreements to do so as soon as possible”.

Overall, the 2019 IAEA general conference was significant on a number of fronts. On a practical level, the conference provided insight into the agency’s work and ongoing objectives. It also spotlighted the difficulties faced by the agency, and offered member states an opportunity to debate and engage on topics relevant to the agency’s broad mandate. On a wider level, the functioning of the general conference offers useful indicators relevant to nuclear policy and international diplomacy.

In terms of broader patterns of diplomacy and policy making, the conference spotlighted a number of practical elements that must be aligned for effective decision making. In this regard, it was through consideration of working reports and recommendations of the agency that many of the resolutions were adopted.

Though positive on the whole, such factors do not completely debunk contemporary trends that show a shift away from and engagement with international organisations. Moreover, it would be reckless to assume that such factors are indicators that the forth coming year for the IAEA will be obstacle free or unimpeded. For example, implementation of safeguards and broader verification issues – most acutely including Iran’s shift away from its commitments under the JCPOA and the DPKR’s nuclearisation – will feature predominantly in the agency’s work for 2020. Likewise, given the political sensitivity of verification activities and their interconnectivity with the upcoming Review Conference of the Non-Proliferation Treaty, it is also foreseeable that the agency’s impartiality and the efficiency of the newly adopted resolutions will be tested and scrutinised.

This being said, the 2019 general conference offers a refreshing demonstration of commitment and support for an international agency/organisation. It simultaneously demonstrates the nuances of diplomacy and the careful balance that must be adopted in evaluating and approaching international issues. In this regard, adoption of the aforementioned resolutions and clear focus by member states during the IAEA general conference is markedly positive. However, the value of such events must be moderated by the practical realities of such factors and the manner in which they can be influenced – both positively and negatively – by political will.

2019-10-28
Alexa Reith
Previous: The Lebanonisation of Iraq
Next: What Turkey hopes to achieve with a Safe-Zone in Syria