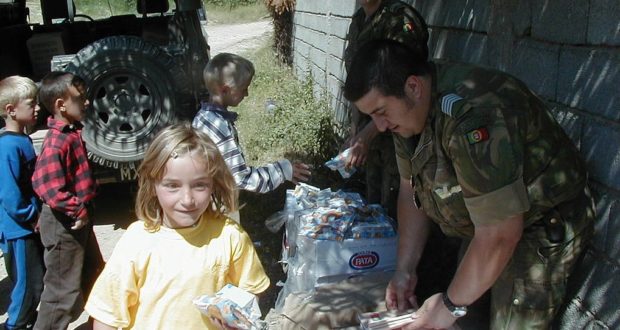 Civil-military cooperation (CIMIC) has become a significant feature in modern operations, in part due to the growing engagement of the military in the humanitarian sector and peacekeeping operations. Both areas of warfare and peacekeeping have demonstrated increasing overlaps between the civilian and military fields, becoming more complex and intertwined.

Traditionally, the purpose of the military is attributed to the ‘application of violence’. Such thinking has shifted in recent years, as the ‘social responsibility’ of militaries has moved to the forefront. There has been an overall trend of multinational military forces taking on humanitarian roles and mandates. It is therefore important to update the understanding of military forces and civil-military cooperation, based on the changing nature of operations and long-term priorities.

As a civil-military organisation, NATO has increasingly engaged in many different types of operations, including peacekeeping and nation-building. Since 1999, NATO has been leading a peace-support operation in Kosovo, initially taking on the coordination of humanitarian aid, in later years focusing on capacity-building in the nation. Cohesion problems were evident from the outset. Initially, some twenty different national forces were involved, each more inclined to follow national guidelines than those of the Force Commander. Disjuncture became even more evident in the cooperation between humanitarian agencies and military forces.

Humanitarian organisations are often concerned about the impact of civil-military cooperation on their mandated responsibilities to remain impartial, neutral and independent in fulfilling their core tasks. Furthermore, while the military is often very clear about its objectives and tasks before the start of the operation, civil societies organisations are more inclined to adjust their tasks and act in accordance with local needs.

Some see military involvement in post-conflict reconstruction and humanitarian relief efforts as a part of hegemonic strategy, whereby armies seek domination, or to gain a strategic foothold in a particular region. Others link it to substitution theory, whereby a reduction in armed conflicts creates an emerging need to keep militaries engaged, to maintain domestic legitimacy and justify military spending. Although it is important to examine these ideas, there is a need to move beyond the theoretical concepts explaining military motives. Instead, we should focus on improvement.

Assessing civil-military cooperation is important, as it sheds light on the overall efficacy of operations as a whole. As an ‘input’ into nation building and peacekeeping, CIMIC is easier to measure than the ‘output’, i.e. effective workings of the state and the judiciary etc.

Investment in civil-military cooperation has increased in recent years, as there is greater recognition that this is a field in need of improvement. Some challenges are reflected in the need for clearer cooperation and better coordination to avoid duplication of efforts, and in navigating issues such as the exchange of sensitive security information. Actors are seeking to adapt their procedures to overcome the sheer amount of resources, personnel and expertise required in the completion of tasks.

The problems that arise in times of crisis are as diverse as the nature of global crises, conflicts and disasters. Lessons Learned provide guidance for personnel, to avoid problems deriving from mismatched chains of command, communication chokepoints and uncertainty in crises. Lessons Learned from Afghanistan (2010) provide concrete recommendations, such as moving the Senior Civilian Representative (SCR) role from passive reporting, to an ‘active catalytic role’, augmentating the SCR Office and expanding the role of the SCR within their terms. Elsewhere, recommendations suggest careful use of vocabulary to enhance dialogue, moving away from military jargon and terminology. Lessons Learned are plentiful and they seek to solve the wider issue.

The overarching problem is the breakdown in communication, as information is not routinely shared. NGOs may be wary of volunteering information on their activities, out of apprehension that the military may seek to integrate, ‘instrumentalise’ or dilute them. Conversely, CIMIC issues emerged during the Haiti 2010 earthquake, when US military commanders exhibited a reluctance to engage with UN humanitarian coordination leadership and mechanisms, due to security procedures, as well as resistance to taking instructions from the UN. According to Lessons Learned, coordination was problematic, until agreements were developed and a joint UN/US centre was established.

At the organisational level, the complex mesh of mandated responsibilities, functions and interests reveal the need for disentanglement. At the operational level, there is a need for innovative solutions to navigate communication chokepoints. While military deployments and capabilities are often classified, there is an option for militaries to redact certain information within a text, rather than classifying the entire document. Another possibility is the use of Artificial Intelligence (AI) to remove and replace key information on a need-to-know basis, depending on the recipient of the file. Where appropriate, such an approach could enhance cooperation and ensure confidentiality.

Lessons Learned over the last 20 years tend to repeat the need for civil and military organisations to enhance staff training, both separately within each organisation, as well as collectively. Beyond this, there is a need to assess the efficacy of training and share this information across NATO member states. To this end, the recommendations below seek to provide guidance for analysts.

There has been ample research providing analyses of existing problems in CIMIC and presenting recommendations for improvement. Nonetheless, there is an emerging need to assess which of these are being adopted, or the extent to which these constitute ‘lessons ignored’ rather than ‘lessons learned’. Recommendations for moving forward suggest a closer comparative analysis of the last two decades of CIMIC Lessons Learned. This could identify key problem areas, in addition to the rate of implementation and any emerging patterns.

There is also a need for a large-scale survey, to be aimed at personnel from across all NATO member states. In 2012, the NATO Civil-Military Cooperation Centre of Excellence issued a survey to Lithuanian civilians and troops involved in the Lithuanian Special Mission in Afghanistan. It shed light on several key elements:

However, it was limited to the personnel of one NATO member state. Furthermore, there has not been a comparable study since. It would be useful to generate a new and updated survey, to be issued on a larger scale, aimed at personnel from across all NATO member states. Such a study could provide valuable information to the leadership.

This would also be a good opportunity to consult civilian and military experts on the matter. It is recommended that analysts undertake a new qualitative study in the form of a focus group or a series of separate interviews. Participants should include civilian and military staff, both at the operational and strategic levels. The purpose is to glean insights from as many perspectives as possible, in greater detail. Lessons Learned tend to be vague, with taglines such as ‘Fostering Complementarity’ or ‘Interoperability through Dialogue’.

As we enter a new decade, it is essential that militaries, organisations and nations learn from many years of Lessons Learned and actually implement them. Significant events since the 2000s have provided opportunities for analysts to identify areas in need of improvement. It is now time for a consolidated study, in order to fill in the gaps.

We invite you to watch this space.

2020-02-01
Theodora Ogden
Previous: Urban Security: Vehicle-Ramming Attacks in Europe
Next: The revolution must come from below: 2020 as a year of progress and change in the Western Balkans