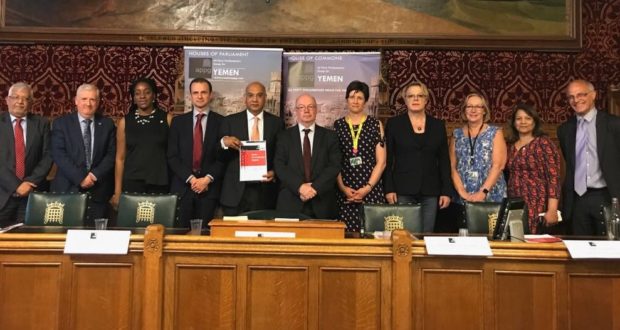 The Human Security Centre is pleased to announce that the All Party Parliamentary Group for Yemen has published its report into the ongoing conflict in the country. As the secretariat of the APPG Yemen, the HSC played a leading role in compiling the report, ‘Yemen: The Continuing Tragedy’. The full report can be accessed here.

The document provides a detailed analysis of the conflict – including the humanitarian and security situation on the ground; the role of key players including Saudi Arabia, Iran and the UK; and provides recommendations to the UK Government for alleviating the suffering of civilians and bringing the war to a close. These recommendations include:

Speaking at the report launch, the chair of the APPG for Yemen, Keith Vaz MP, said: “This is the world’s worst humanitarian crisis. But you don’t read about it on the front page the Evening Standard, you don’t see it on television, you don’t hear about it being debated.” He added: “I think what is clear from the report and its recommendations is that we want the peace process to be started again. Without that peace process, without that ceasefire, we will continue to have people dying every single day.”

Also speaking at the launch event, Shadow Foreign Secretary Emily Thornberry MP said that the report “represented a simply outstanding piece of work”. She noted the seemingly intractable nature of the Yemen conflict, and that “nothing intrinsically has changed” in the three years the war has so far lasted. Ms Thornberry highlighted the need for action in light of the millions in need of humanitarian support, and that the report’s recommendations were “clear, pragmatic, achievable steps” that represented a blueprint for effective action.

Commenting on the report, Stephen Gethins MP, SNP international affairs spokesperson, said: “This is an excellent and really timely piece of work. At a time when there are so many appalling conflicts taking up the time on our television screens, to get the facts out there and to get some recommendations out there… is something that I am very grateful for”. He added: “This conflict is an object of shame for the whole world.”

Speaking in advance of the official Government response to the report, Foreign Minister Alistair Burt MP noted that: “The UK remains deeply concerned about the humanitarian crisis in Yemen, the largest in the world. The UK is doing everything it can to respond.” He added: “Most of the recommendations, I think you will find when we respond to the report, we will support”, and highlighted the Government’s position that there can be “no military solution to the conflict”.

2018-05-23
admin
Previous: Russian Missile Defense and Anti-Satellite Capabilities: Enabling Coercion
Next: The cautionary tale of the Treaty on the Prohibition of Nuclear Weapons