Home / Asia and Pacific / All Change at the White House? 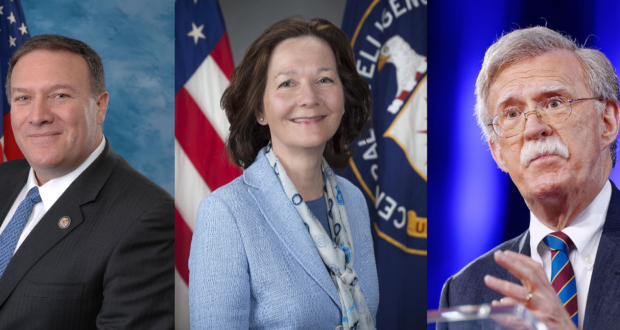 All Change at the White House?

Personnel changes have been a key feature of the Trump administration since January 2017. As any simple look will tell you, serving in the current White House is risky business for any career. Just ask Rex Tillerson, Michael Flynn, Reince Priebus or HR McMaster – all of whom have been victims of what to many seems like a revolving door hiring policy. And yet, the chance to take on a prestigious role undoubtedly appeals to many if offered to them. Three recent appointments worthy of closer examination are those of Mike Pompeo to lead the State Department, John Bolton as National Security Advisor, and Gina Haspel as Director of the CIA. Importantly, rather than simply being name changes, their elevation may also signal the beginnings of a shift in White House foreign policy stance.

New Secretary of State, Mike Pompeo, has enjoyed a quick rise to prominence. Formerly a Congressman from Kansas, joining Congress in the Tea Party Wave of 2010, Pompeo’s background before the House of Representatives consisted of graduating first in his class from West Point, service as a Captain in the US Army, then a stint at Harvard Law School before forming a successful aerospace company. Appointed as Director of the CIA in 2017, Pompeo took personal responsibility for briefing Trump on a wide variety of foreign and security policy issues, using this face time to build a rapport. This was a Pompeo innovation, replacing the CIA’s usual briefer with himself in order to get such interaction. By the time he had been nominated to replace the fired Rex Tillerson, Pompeo had built up a strong working relationship with Trump.

Somewhat unusually for a senior official in the Trump administration, Pompeo has also succeeded in showing Trump his loyalty, having mounted a robust defence of the president when the occasion has called for it. This loyalty has extended to things such as meeting figures raising doubts about the Russia investigation, taking direct command of the CIA’s counter-intelligence operations relating to Russia and invoking executive privilege to prevent CIA agents from testifying in trials. Such moves to avoid embarrassing the Trump administration have undoubtedly gone down well with his boss.

More recently, Pompeo has been Trump’s point man on North Korea, having been sent to meet Kim Jong-un over the Easter weekend for talks ahead of the planned Trump-Kim summit in June. Furthermore, following Pompeo’s confirmation, he undertook a high profile, successful diplomatic mission that saw the return of American detainees in North Korea. With the highly active start to his tenure at the State Department, Pompeo looks set to play an influential role in his new position. Whether he will succeed in retaining Trump’s trust remains to be seen, as within the current administration, influence can very often be a double-edged sword. Already, Pompeo is finding himself on the end of speculation that he is locked in a policy battle over the Middle East and North Korea with John Bolton.

Having taken over as National Security Advisor (NSA) despite much criticism of his appointment, Bolton – remembered by most for his short but colourful stint as US ambassador to the UN during the W. Bush administration – looks set to be quite different in his approach from his predecessor, HR McMaster. Despite having been in the job for less than two months, he has already been making waves, notably as a key figure pushing for Trump to go with his instincts and reapply sanctions to Iran, thereby undercutting Obama’s deal. When Trump announced Bolton’s appointment in March, such policy shifts were the main concern of those worried about his influence. He has also sought to derail forthcoming talks between the US and North Korea by suggesting that any disarmament plan follow the ‘Libya model’. Whereas Bolton would argue that he was referring to the 2003 deal in which Libya peacefully surrendered its weapons of mass destruction in exchange for restored diplomatic and economic relations, he also knows full well that reference to this approach will only remind Pyongyang of the fate of the disarmed Gaddafi government just eight years later, and deter them from meaningful negotiations.

Additionally, Bolton has moved quickly to get rid of established National Security Council (NSC) figures such as Homeland Security Advisor Tom Bossert and Deputy NSAs Ricky Waddell and Nadia Schadlow. There are rumours Bolton wants to merge the Homeland Security Council with the NSC and abolish the NSC’s cyber security coordinator role whilst placing its responsibilities under the control of his new deputy, Mira Ricardel. These shifts hold significance, as it indicates Bolton wants more extensive control over NSC processes than McMaster and wishes to make himself the centre of presidential advice.

Bolton is well known as an unapologetic advocate of regime change, something that seems at odds with Trump, who ran rejecting Bush era foreign policy in the 2016 election. Bolton is already succeeding in the context of his views on the need to terminate the Iran deal, but whether he can assert himself even further and go against figures such as Mattis on regime change in Iran will be interesting and worrying to view. The US rejecting the Iran deal is one thing, but looking at measures to overthrow the government in Tehran is a whole new ballpark.

Bolton’s well known forthrightness and stubbornness on policy could also get him into trouble with a president who exhibits the same traits, but dislikes them in others. If Bolton allows the full extent of his radical views on regime change, American power and war to come to the fore, he is playing a high risk, high reward game. He could persuade Trump to his thinking or risk repelling the president into dropping him like McMaster.

Trump’s CIA Director nominee, Gina Haspel, met a hostile reception on Capitol Hill during her confirmation hearings. Haspel, previously the CIA’s Acting and Deputy Director, has made history as the first female Director. She is also a rare choice in respect of being a CIA career officer, with many of her predecessors having strictly political or military backgrounds. This part of Haspel’s history, however, is what raised problems with her nomination.

In late 2002, Haspel was charged with overseeing a secret CIA prison in Thailand where enhanced interrogation techniques – which are perceived by many, including Senator John McCain, as nothing short of torture – were used against prisoners. Furthermore, Haspel was then accused in the memoirs of Jose Rodriguez, the former Director of the National Clandestine Service (NCS), of being complicit in the destruction of videotapes of interrogation sessions. The controversy has dogged Haspel’s career since then, leading to her being refused the chance to be nominated for NCS Director in 2013.

Having now been confirmed as CIA Director, Haspel will very likely want to continue the close relationship that Pompeo had with Trump. The most obvious reason is that it helps a CIA Director enormously to have a good relationship with the president. In contrast, poor relations between the head of the CIA and the president can undermine the prestige and importance of the agency in the office politics of the NSC – as occurred when former directors such as Woolsey and Goss had poor relationships with their presidents.

However, in addition, Haspel will also have Trump to thank for standing by her nomination. It was reported in the week before Haspel’s confirmation hearings that she had offered to withdraw, something rejected by Trump. As a result, Haspel knows for now that she has an ally in the president. It will, therefore, make Haspel quite unlikely to defy her president publicly. Haspel has pledged not to restart the torture programme. With the trouble that interrogation has caused her career to date, she will probably stick to this, but in my view, the real test is what happens if Trump wants Haspel to reverse such policies.

Recently, the New York Times wrote of how the rises of the new appointments would see Trump have the most radically aggressive foreign policy team in modern memory, even exceeding that of the W. Bush administration. Already Pompeo and Bolton are showing ruthless effectiveness in their new roles and Haspel, with her decades of CIA experience, will be no stranger to asserting the CIA’s role. Whether these new figures can keep Trump’s trust and win policy battles will certainly be an interesting story to see.