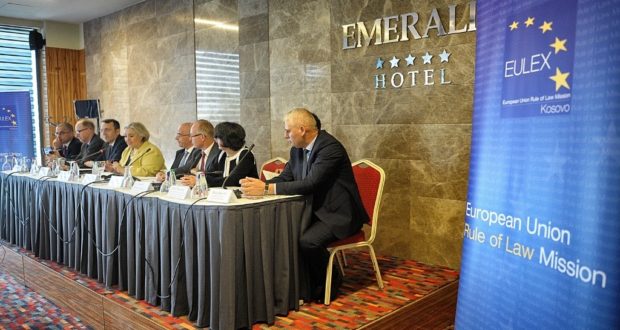 Teaching by example? The European Union’s Rule of Law Mission in Kosovo

On 14 June, the mandate of EULEX – the European Union’s mission focused on assisting and supporting Kosovo’s authorities in enforcing the rule of law – will come to an end. The mission is likely to stay on and assume a monitoring and advisory role, although the details of its future designation have not yet been agreed on or made public. This change comes at a sensitive time for Kosovo, but also serves as a test of the organisation’s commitment to strengthening the rule of law, and the European Union now has a unique opportunity to prove that it can be the adviser and support provider the countries in the Western Balkans need. For this, however, EULEX needs to learn to work together with the relevant domestic institutions and authorities – and with a track record almost defined by failures and malpractice, the mission needs to start assisting and supporting instead of imposing its so-called European way of doing things.

Unfortunately for both the European Union and Kosovo, the former’s largest civilian mission will not be ending its executive mandate with ground-breaks in the field of justice to boast. In 2008, EULEX inherited 1,200 war crimes cases from its predecessor, the United Nations Mission in Kosovo (UNMIK), out of which 500 were dismissed due to lack of evidence. In the decade in which it operated, EULEX has obtained only 38 verdicts, and managed to secure convictions in 12 corruption-related cases and 12 cases of organised crime. The mission also stopped taking over new cases in 2014, when it officially started its gradual transfer to the domestic judiciary.

A report published by the European Court of Auditors in 2012 called EULEX “ineffective and plagued by delays”, and highlighted a tendency for member states to send unqualified candidates for the relevant posts. The mission has also been accused of corruption, negligence and fraud, and the added allegations of political interference led chief judge Malcolm Simmons to resign last year. In 2014, the mission experienced its most publicised corruption scandal, when Italian judge Francisco Florit was accused by EULEX prosecutor Maria Bamieh of bribe taking in both a murder and a high-profile corruption case. The claims were deemed unfounded by the European Union, but Bamieh’s allegations that EULEX had initially ignored her suspicions and suspended her for going public with them meant that questions about the integrity of the mission and its officials persisted.

The manner in which EULEX has conducted its transfer of cases has also been criticised by Kosovo’s judges and prosecutors, who argue that in some ways the mission has made their jobs more difficult rather than easier. Domestic courts and institutions have been left to not only contend with a significant number of cases that have remained untouched for over a decade, but also familiarise themselves with the open cases inherited and their various stages of progress. Without a strengthening of these courts and institutions, which would entail an increase in the number of qualified personnel and further training for local judges and prosecutors, hundreds of war crimes and corruption cases will go on unsolved.

Despite this, the controversy surrounding the Specialist Chambers alone shows how unequipped Kosovo is to improve its rule of law, and how necessary international assistance and supervision continue to be for the youngest Balkan country. The country’s ruling coalition parties vehemently opposed the specialist court established to try former Kosovo Liberation Army (KLA) members, calling it discriminatory on account of the fact that it will not try members of the Serbian force accused of committing atrocities during the war. The repeated attempts to prevent the Hague-based war crimes court from operating ultimately failed, with warnings from both the European Union and the United States leaving Pristina’s parliament with little choice in the matter. However, as both of Kosovo’s heads of state – President Hashim Thaci and Prime Minister Ramush Karadinaj – are former KLA leaders, derailing the work of any justice institution that could see them as their next targets is likely to remain on their agenda.

From an international point of view, Kosovo has reached a point where it needs to prove itself to the European countries deciding its future. The European Union’s latest enlargement strategy for the Western Balkans, published in February, mentions Kosovo almost in passing, leaving a distinct impression that the youngest Balkan state is less of a ‘potential candidate’ than Bosnia-Herzegovina. This change in tone came after Spain issued a complaint over Kosovo being considered equal to Serbia and Montenegro in terms of its European perspective, which was backed by fellow European Union non-recognisers Greece and Slovakia. In the wake of its own separatist crisis, Madrid took the opportunity provided by the EU-Balkan summit to further clarify its position towards Kosovo, with Spanish Prime Minister Mariano Rajoy refusing to attend on account of Pristina’s presence at the summit.

There may, however, be a glimmer of hope in sight for Kosovo internationally. Officials in Serbia – President Aleksandar Vucic included – have increasingly been hinting at a referendum on the Kosovo issue, with declarations that Serbian citizens will soon be given the opportunity to voice their opinion on a proposed compromise solution. Aside from being necessary, as Kosovo is still legally considered part of Serbia’s territory and any agreement between the two countries would require changes to the constitution, a referendum is a good idea in principle. The outcome of it, however, will largely depend on the direction the political campaign leading up to it will take, as well as the way in which the question or questions asked as part of the referendum will be phrased. Vucic’s government will need to make up their minds on which way they want the vote to go – and as he has proven time and again, it could go either way.

As things stand, Vucic’s tendency to change his political tune could be either a blessing or a curse for Kosovo. The Serbian President can sell the idea of an independent Kosovo to his people if he wants to: a survey conducted in December 2017 by Open Society Foundation and IPSOS Strategic Marketing found that almost half of Serbian citizens see the dispute with Pristina as a key obstacle to Belgrade’s economic progress, and a similar percentage believe that Serbia should not sacrifice European Union membership in favour of holding onto what they – the people of Serbia – consider a lost territory. The practical could triumph over the historical – particularly when there is so much to lose by favouring the historical.

Vucic, however, is waiting to see what he will get in return for compromising on Kosovo, as well as how far he needs to and should go on this compromise. As such, now is the time for an actual carrot rather than the promise of one from the European Union – and now is the time for concrete actions on the part of the organisation instead of vague offers and promises.

Kosovo and Serbia are each other’s deal-breaker when it comes to joining the European Union, and that much has been consistently made clear by the organisation. What has not been made clear, however, is what the so-called “normalisation” of relations between the two countries needs to entail – which gives both sides some room for manoeuvre. As such, both countries are playing for time until the European Union assures them of a worthwhile reward. Belgrade is unlikely to favour a redrawing of the borders, which would involve sacrificing majority-Albanian districts in southern Serbia to gain North Kosovo. Similarly, Pristina’s government is stalling on setting up the Association of Serbian Municipalities agreed with the European Union in 2013 less out of conviction and more in an attempt to see other sides compromising for a change. Vucic’s declaration, backed by Thaci, that there is a brief window of six months to a year in which a deal might be reached is most likely meant as a tactic to force the European Union into action.

Nevertheless, while Serbia can afford to bide its time until the European Union furthers their progress on the European path, Kosovo’s options are more limited. With the border demarcation deal with neighbouring Montenegro painstakingly ratified after months of delay, postponing reforms to its judiciary is not an option if Pristina wants to be given the long-awaited right to travel visa-free in the Schengen area. Since every important decision has to go through a parliamentary session disrupted by the opposition with the use of tear gas, moreover, saying they have a lot to prove and quickly is an understatement.

The European Union’s latest enlargement strategy listed the rule of law as one of the main areas the Western Balkan countries will need to focus on if they are to move forward on the path towards membership. Its very own EULEX’s failures and shortcomings, however, have served more to undermine than to highlight the organisation’s commitment to promoting the rule of law, as well as its ability to strengthen the justice systems in the region. The mission assuming a monitoring and advisory role starting in June has the potential to rectify some of this damage – and how much Kosovo could benefit from it cannot be overstated.

2018-06-04
Irena Baboi
Previous: All Change at the White House?
Next: The Role of China in Resolving the Myanmar Rohingya Crisis