Home / Latest Articles / Russia and Europe’s Far Right: Is there an alliance? 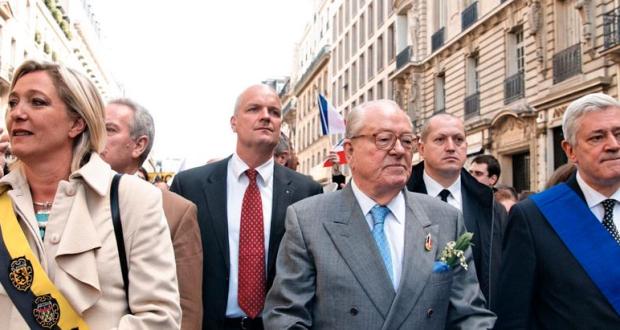 Russia and Europe’s Far Right: Is there an alliance?

In late November, Western media reported that the French National Front had received a €9 million loan from the First Czech-Russian bank to finance its electoral campaign.[1] The party officials explained that this was the only bank that had agreed to give a loan to the National Front, as other French and European banks had refused to provide financial assistance to the party.[2] The owner of the First Czech-Russian bank is claimed to have links with Russia’s political establishment, which has raised an important question: does Russia provide financial support to the European far-right?

On the one hand, an affirmative answer would contradict Russia’s established public discourse on the threat of ultranationalism, particularly Ukrainian.  On the other hand, denial of links between the two sides can hardly explain the fact that representatives of European far right parties and groups observed the Crimean referendum in March and recognised its legitimacy.[3] Meanwhile, the impeded relations between Russia, the EU and US, means that the possibility of cooperation between Russia and European far right parties carries rather significant implications: the Russian state is in search of support within the EU. At the same time, certain far right parties and groups in Europe have publicly expressed and provided political support to Russia, particularly with regards to its stance in the Ukrainian conflict. This contrasts the political and economic pressure that is imposed on Russia from European states and illustrates the opposition towards such policies within the EU.

Certain European far right parties have taken a pro-Russian stance in the Ukrainian crisis and have demonstrated their support for Russia. Firstly, representatives of both the far right and the far left observed the March referendum in Crimea and recognised its legitimacy.[4] For instance, a spokesman of the French National Front L. De Danne claimed that Crimea had “its legitimate right” to have a referendum, as it was “historically part of the Mother Russia”.[5] Bulgarian far right Ataka party advocated the Bulgarian state to recognise the referendum in Crimea.[6] Additionally, the Hungarian MEP from Jobbik party M. Gyöngyösi has recognised the referendum as legitimate.[7] Other parties that monitored the Crimean referendum were Austrian Freedom Party, Belgian Vlaams Belang party, Italy’s Forza Italia and Lega Nord, and Poland’s Self-Defense.[8]

The monitoring mission was organised by Eurasian Observatory for Democracy and Elections, which positions itself as a non-aligned NGO but has adopted Russia’s rhetoric regarding the West and the Ukrainian crisis. Headed by far-right Belgian activists, the organization has conducted missions to several regions with undefined international status, such as Transnistria, South Ossetia and Abkhazia.[9] Interestingly, this monitoring mission observed the November elections in the so-called “Donetsk People’s Republic” (DNR) and “Luhansk People’s Republic” (LNR) along with the European Centre for Geopolitical Analysis, headed by Polish far-right politician Mateusz Piskorski, and the Agency for Security and Cooperation in Europe (ASCE), which was established on the day before the vote.[10] The presence of European far right party members was lower than in the Crimean referendum, however, such parties as Belgian Vlaams Belang party, Bulgarian Ataka party, Hungary’s Jobbik, Forza Italia and M. Le Pen’s French coalition were represented in the monitoring mission.[11] It is noteworthy that also Russia’s Foreign Affairs Ministry recognized the elections in two Eastern self-proclaimed republics.[12]

However, the cooperation between Russia and certain European far right parties started before the Ukrainian crisis in the form of joint meetings, forums and conferences.[13] Additionally, in 2012, two French National Front members founded ProRussia.tv channel and signed contracts with Russian federal media, such as ITAR-TASS.[14] The channel was closed two years later, as a French-speaking version of Russia Today TV channel was launched in August 2014.[15]

It is important to recognise that Europe’s far right parties do not compose a homogenous political group; furthermore, their stance towards Russia is rather diverse.[16] The principal focus here lies with the Eurosceptic parties that have been reported to express public support for Russia or promote stronger cooperation with the Russian state: Austria’s Freiheitliche Partei (Freedom Party), Belgian Vlaams Belang, Bulgarian Ataka, French Front National, Hungarian Jobbik, Italian Lega Nord and Fiamma Tricolore, Greek Golden Dawn.

Despite certain ideological and tactical differences, the mentioned parties share a political and, to a certain extent, ethical vision of Russia, which will be discussed in the following points.

This perception implies that the Russian state is an actor that does not accept the international and security layout, which is imposed on Europe by the US and leads to the dominating role of the latter.[18] For certain European far right parties, Russia’s position on the Ukrainian crisis is an example of a self-sufficient centre of power that demonstrates non-compliance with the US domination.

For European far right parties, the strength of political leadership is determined by the political will and ability to oppose the EU and US. Not only does Russian President Putin meet this criterion, but he also asserts an alternative political and economic vision of the world.[19] Most importantly, Putin “did not allow other countries to impose decisions on him” and has demonstrated resistance to the pressure of the EU and US sanctions.[20] For instance, Marie Le Pen, the leader of the French National Front, expressed her admiration for Putin’s “cool head” “because there is a cold war being waged against him by the EU at the behest of United States, which is defending its own interests. I admire that he has managed to restore pride and contentment to a great nation that had been humiliated and persecuted for 70 years…”[21]

The EU is perceived by the European far right as a political system that interferes with internal state affairs and advocates policies that do not correspond with the national interests.[22] For instance, in terms of the economic crisis, the Union has been blamed for depriving the eurozone states of internal monetary control.[23]

In the context of these arguments, Putin is seen as a leader who “puts the interests of Russia and the Russian people first” and establishes a patriotic economy.[24] For those European far right parties that advocate the transnational principle of non-interference in internal affairs, Russia is a state that protects itself from external interference.

The conservative element of certain European far right parties has for example been articulated by the leader of Hungarian Jobbik party G. Vona: “Europe and the West have disowned their most essential and ancient values”.[25] At the time of Europe’s perceived moral decay, Russia has preserved traditional Christian values. For instance, Russia’s anti-gay propaganda law of June 2013, which has been widely criticised by the West, is perceived by certain European far right parties as a state policy aimed at defending traditional family values.[26]

From the far right’s vision of Russia outlined above, it could be suggested that the two share two political goals and interests that could lay the ground for their cooperation. The first goal is to undermine “US domination” in the world and break the alliance between the EU and US. It is significant that the anti-US element is crucial for both Russia’s and Europe’s far right rhetoric. From the perspective of far right parties, the US manages European affairs to promote its interests in the world.[27] Russia perceives the US as an instigator of anti-Russian transformations in its nearest neighbourhood, which undermines Russia’s influence in the region.[28]

Interestingly, the idea of a common enemy might serve as the basis for cooperation between the two sides. The shared goal of breaking the alliance between the EU and US, despite different reasoning, is of high importance for both Russia and European far right parties.

The second shared goal is to prevent further EU integration and weaken EU institutions and political system. Although the European far right parties differ in the extent to which they adopt a Eurosceptic approach, they all challenge the EU’s viability and argue against the common Union policies by drawing public attention to immigration and fiscal issues.[29] According to M. Le Pen and G. Wilders, leader of Dutch Party for Freedom, the European far right have a common task of “liberating” Europe “from the monster of Brussels”, in order “to repatriate the ability to decide ourselves how we control our borders, how we control our money and our economy”.[30]

Furthermore, as suggested by for example T. Snyder, undermining the EU has become Russia’s foreign policy strategy along the lines of “to become strong, you need to make your adversary weak”.[31] The most prominent reasons for elaborating this strategy is, firstly, that a destabilised and weakened EU would act less coherently, particularly in regards Russia. Secondly, a weakened Union would not expand to the Russia’s nearest neighbourhood and establish its influence there.

In Search of Western Allies

From Russia’s perspective, the motivation behind establishing political links with European far right appears strategic rather than ideological.[32] Russia’s interest in allies within the EU could be explained by the need for co-operation with political actors that

After several waves of sanctions imposed by the EU, the stability of Russia’s gas export to the European market has been challenged. South Stream, a Russian-European gas pipeline across the Black Sea, was recently announced closed by Putin based on the EU decision to discontinue the project.[34] The Russian president assessed the official EU position on South Stream as “against Europe’s economic interests” and “causing damage” to Russian-European cooperation.[35] Although Putin stated that Russia would re-concentrate its energy resources on other world regions, European energy market remains important for Russia’s economy.[36] Interestingly, Russia’s role as Europe’s gas supplier and economic partner has been publicly advocated not only by European far right parties, but also Central and East European governments, particularly of the Czech Republic, Hungary, Slovakia and Serbia.[37] These states have expressed disagreement with the EU sanction policies towards Russia, while some of them, for instance Hungary, have enhanced energy cooperation with the Russian state.[38]

The grounds for an alliance between European far right and Russia have been motivated by and shaped along the lines of opposition and counteraction to the idea of a “common enemy” in the EU and the US.  For European far right parties, the underlying motivation for targeting the EU is the assertion of national interests as opposed to the Union policies. For Russia, the EU is a challenging external actor that monitors and reacts to Russia’s foreign policy, but also an economic partner that is interested in secure and stable economic cooperation.

It could be suggested that the tension between Russia and the EU that resulted from the Ukrainian crisis shapes two dimensions of Russia’s foreign policy strategy towards the EU: weaken the challenging actor that generates political and economic pressure, and shift the EU position in favour of Russia. The role of the far right can be seen in both dimensions, as it both serves to weaken the EU from within and to improve Russia’s image in the EU public opinion. With no sign of a thaw in relations between the EU and Russia, the ideological and strategic bonds between Russia and Europe’s far right is clearly a significant development.

Ielizaveta Rekhtman is a Research Assistant with the HSC. Contactable at:

[12] The Ministry of Foreign Affairs of the Russian Federation [Link]

Europe far right Russia 2014-12-23
Ielizaveta Rekhtman
Previous: Human rights in Crimea: A lost cause or a growing cause of concern?
Next: Pakistan’s doubled-faced terrorism policy has come to bite them