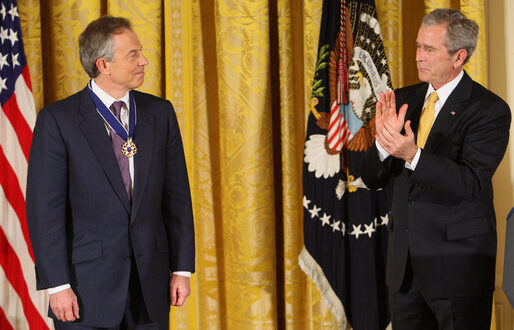 GWB: Ceremony for 2009 Recipients of the Presidential Medal of Freedom.

This article was published in the Times of Israel.

After eight years in the job, Tony Blair has resigned from his pro-bono position as Representative of the Middle East Quartet comprising the US, the EU, the UN and Russia (no, he is not the “Peace Envoy” hired to appease the region). The reactions to his departure were entirely predictable ranging from “how come a war criminal ever became a peace envoy in the first place?” to “having achieved nothing but his own enrichment, Tony Blair steps down as Mideast Peace Envoy”.

Whenever Mr Blair is concerned common sense goes out the window and hysteria takes over.

First, the Quartet’s mandate is limited in scope: unpolitical with a focus on building a robust economy and functioning institutions to prepare the Palestinians for statehood. Mr Blair’s job was to develop plans to promote Palestinian economic development, including private sector partnerships, building on previously agreed frameworks, especially concerning access and movement. His mandate never allowed for him to take charge of the political peace process and, often in private and sometimes publicly, he voiced frustration over the restrictions placed on his work.

In other words, there is a huge discrepancy between what the public believes he was supposed to be doing and what he was actually supposed to do. It therefore comes as no surprise that his time as Representative of the Quartet has been written off as a complete failure.

But the reality speaks a different story. The Palestinian economy has grown, restrictions on access and movement of Palestinians have been eased; blockades have been lifted; and West Bank initiated terrorist attacks on Israel have decreased.

Under Mr Blair’s leadership, the Quartet negotiated a change on imports, which has resulted in the number of products being allowed into Gaza increasing significantly. Most of the raw materials needed for the industrial sector are permitted, as are home repair items such as paints, tiles, sanitary ware, marble, and electrical supplies.

He secured frequencies for a second Palestinian mobile phone operator: this has resulted in an external investment of around $350 million and the creation of thousands of jobs, both directly and indirectly. The Wataniya project represented the single largest foreign direct investment there has been into the Palestinian Authority.

Together with then Palestinian Prime Minister Salam Fayyad and the Governor of Jenin, Mr Blair has achieved the opening of Jalameh Crossing. This has resulted in thousands of Arab-Israelis visiting Jenin and the northern West Bank and increasing the GDP of Jenin by at least 15%.

Other achievements include an increasing capacity of Kerem Shalom and Erez, the facilitation of the implementation of major sanitation projects in Gaza (such as Sheikh Ajleen water treatment), approval of a number of projects for the construction and rehabilitation of schools and clinics in Area C and improved housing opportunities to Palestinians in East Jerusalem.

The list goes on but whilst economic growth and the lessening of all kinds of restrictions get too little credit as important improvements for ordinary Palestinians, the press instead lapses into ad hominem attacks and obsesses about the entirely unrelated subject of Iraq 2003 and trivial details such as the office arrangements in Jerusalem. It is true that for many years the Quartet’s office was based in the 5-Star American Colony Hotel, which attracted much criticism for the enormous costs involved, however, the Quartet, under Mr Blair’s initiative, has moved out years ago into an office building down the road in East Jerusalem which few who ever visited would describe as extravagant.

Another point of criticism frequently hurled at him is that he has an unremitting record of bias towards Israel. Whilst it is true that the Palestinians may not have lost a natural political ally, they have lost an official who understood the need to build a Palestinian nation from “the bottom up” and with the capacity to bring much needed economic growth and investment to the Palestinian territories more than any of his predecessors.

The Israelis, on the other hand, have lost someone who genuinely appreciates the challenges Israel faces from Iran to Islamic extremism and has shown unwavering support for Israel’s right to defend itself. During the latest Gaza escalation in the summer of 2014, when the European political elite was united in its condemnation of Israel’s action, Mr Blair sat down with Israel’s Channel 10 and said the following:

“No government could be in a position where rockets are fired indiscriminately on their people and not take action…if rockets were fired at British citizens, no way I wouldn’t be taking action. If Israel didn’t have its defence system – the Iron Dome – and didn’t have evacuation procedures in place, many Israeli citizens would die…it’s not a lack of intent on Hamas’ part to kill Israelis.”

He also condemned Hamas’ deliberate policy of firing rockets from residential areas and using civilians as human shields to increase the pressure on Israel to stop defending itself against terrorist attacks. Such moral clarity is rare.

Mr Blair’s time as Representative of the Quartet is not beyond fair criticism. Some have argued that his other profit and no-profit interests have hindered his ability to carry out his work and that had he only invested more hours, he could have made a greater difference.

But often he has given a huge amount of his time, for instance during the Egyptian initiated peace negotiations during the recent Gaza war, when he flew back and forth between Jerusalem and Cairo multiple times to help broker a lasting ceasefire. It was also an indication that, if only he had been given more political power by the Quartet, he indeed could have had a stronger and deeper impact on the overall peace process. As someone who enjoys good relations with Egypt’s President Sisi and Jordan’s King Abdullah, as well as Israel’s Prime Minister Netanyahu he was in a unique position to help many times to reconcile positions across the region.

Moreover, for Mr Blair to maximise the possibilities of his mandate, he would have needed the support of the Quartet members. But with Syria and Iraq disintegrating, turmoil in Egypt, Libya turning into a law-free terrorist heaven and the Iranian nuclear negotiations, the Israel-Palestine peace process has taken a backseat on everyone’s agenda.

Ultimately the odds were never in Mr Blair’s favour. He took on an impossible and thankless task with a limited mandate, the turmoil of the Arab Spring, the infighting within the Palestinian leadership (especially the sacking of reformist Salam Fayyad by Mahmoud Abbas in 2013) and the disastrous relationship between the government in Jerusalem and the administration in Washington.

There is only so much one man can do.