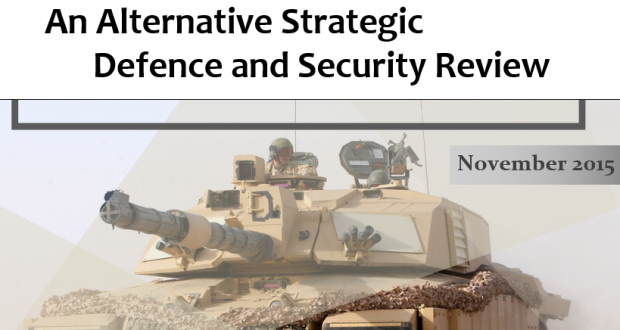 The Two Per Cent Solution: An Alternative Strategic Defence and Security Review

The Human Security Centre is pleased to announce the publication of ‘The Two Per Cent Solution: An Alternative Strategic Defence and Security Review’. This review examines the security and defence threats facing the UK and puts forward recommendations regarding the measures required to address them, in order to inform the government’s forthcoming Strategic Defence and Security Review and its accompanying National Security Strategy, while also contributing to the larger body of knowledge on the UK’s defence and security (download report as PDF).

Our analysis identifies the main threats to the UK and its interests to be:

• terrorism, principally in a form that is rooted in Islamic extremism
• interstate conflict, with the threat posed by Russia to NATO members in Eastern Europe being the leading challenge
• mass population movements triggered by interstate wars, civil war or the collapse of one or more central state authorities
• cyber-attacks by both non-state and state actors

Its core recommendations include:

• sustaining UK defence spending at two per cent of GDP as traditionally defined, with expenditure rising from £37.4bn in 2014/15 to £46.6bn in 2020/21
• configuring the UK Armed Forces to be able to sustain two substantial operations overseas for a limited time
• expanding the Royal Navy by 4,000 personnel to 33,000, as well as bringing both aircraft carriers currently under construction into service
• expanding the Army by 8,000 personnel to 90,000
• expanding the RAF by 4,500 personnel to 36,000, increasing the number of planned fighter squadrons from six to ten, and purchasing twelve maritime patrol aircraft
• replacing the current Vanguard-class Trident carrying submarines
• investing £1bn in efforts to counter cyber-attacks over the next five years

In addressing the threats, both old and new, brought up in the review, Dr Rowan Allport, lead author of the report and a Senior Fellow at the Human Security Centre, said:

“Very few individuals would dispute that the threats faced by the UK and its allies have substantially escalated since the last SDSR in 2010. As is reflected in our review, the new challenges are most clearly embodied in the rise of the Islamic State and Russia’s actions in Ukraine.

As we have highlighted in the review, the greatest threat to the physical safety of the UK remains terrorism, principally of the type rooted in Islamic extremism. Addressing this will require a mix of approaches that will run from expeditionary military operations to community-based counter-extremism programmes. The other main challenge we face is that from conventional warfare between states: the return of Russia as an international aggressor has made the issue of interstate conflict far more urgent than it was in 2010. The security of Eastern Europe and how we can support it must now be factored into military planning in a way that has not been the case in recent years.

Unfortunately, however, we cannot ‘pick and choose’ what issues we deal with. At a minimum, we believe that the UK should be able to sustain two substantial operations overseas simultaneously for a limited period – as the Armed Forces was structured to do prior to the 2010 SDSR – whilst also maintaining a credible domestic defence capability.”

Julie Lenarz, contributor to the report and Executive Director of the Human Security Centre, said:

“In the contemporary security landscape, the UK faces both traditional and non-traditional threats. Nowadays, we often find ourselves at war not with countries, but with groups which operate in ungoverned spaces, where extremism has been left to fester unchallenged. But we are also witnessing the revival of more conventional warfare, carried out under the leadership of hostile states.

To fall below the two per cent threshold – the bare minimum designated by NATO – because of financial constraints would prevent the UK from fulfilling its strategic role and provide only limited and possibly inadequate protection of our national interests.

We live in an extremely interdependent world where we cannot turn our backs on conflicts within other countries if we want to still be secure. The 2015 SDSR needs to reflect this reality.”