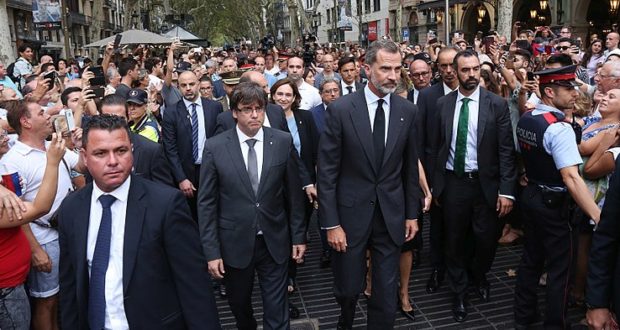 Spain has erred on the side of caution ever since the Madrid attacks and as countries around the world stepped-up their roles in a US-led coalition against ISIL in Iraq, the country remained a reluctant partner. But just because Spain had little appetite to confront ISIL, the group still showed interest in Spain.

The circumstances surrounding the incident in Barcelona fit perfectly into the pattern that we see unfolding across Europe. Angry young men, many of them homegrown, radicalised online, promised honour and glory by a vicious terrorist organisation with only its own interest at heart. That interest is not so much informed by our actions but rather eminently shaped by a skewed historical narrative and fascist ideology.

Read the full article on The Daily Telegraph’s website.

Image: The King of Spain going to lay a wreath with the President of Catalonia and the Mayor of Barcelona following the attack (Source – website of the Generalitat de Catalunya (19 August 2017)/Wikimedia

attack Barcelona Terrorism 2017-08-19
admin
Previous: HSC Director talks to ABC about motivation behind Barcelona attack
Next: The Bulgaria-Macedonia friendship agreement and its lessons for the Western Balkans