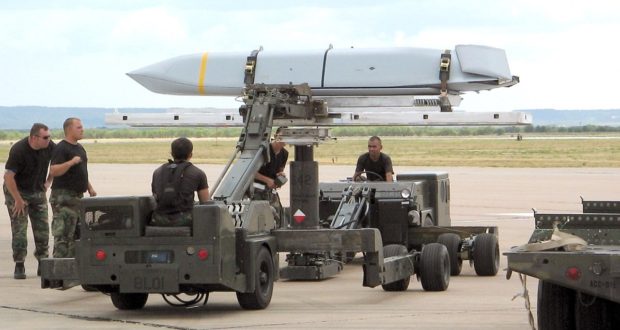 Russia’s reliance on military means to achieve its foreign policy goals threatens the safety and security of the US, its allies and its partners. Recent invasions of Georgia and Ukraine, as well as coercive threats against other neighbors, suggest Moscow believes it again has the upper hand in the region. In its doctrine and exercises, Russia has emphasized the use of artillery and multiple launch rocket systems (MLRS) and has even gone so far as to simulate nuclear weapon employment. Against these threats and military activities, the US and its Eastern European allies and partners must strengthen and diversify their response options – thereby improving their deterrent against Russia. One measure Washington must pursue is cooperating with Warsaw to develop a short-range cruise missile. This will help Poland to deter and to defend against Russian anti-air and long-range fire support capabilities while also strengthening Poland’s position as a central point for Eastern Europe’s defense against Russian aggression.

For centuries, Russia has emphasized superior long-range firepower to overwhelm adversaries. This doctrine has shaped Moscow’s military acquisition strategy. Today, the result of this position is that Russia possesses significant quantities of self-propelled artillery, MLRS, anti-air systems, and armor. These heavy formations, although expensive to maintain and upgrade, present a formidable military challenge. While Russian firepower was less effective against Chechen insurgents, it nevertheless presents a significant problem for the North Atlantic Treaty Organization’s (NATO) conventional forces.

NATO’s ground forces, particularly in Eastern Europe, lack the firepower necessary to match Russian capabilities. Were Moscow to invade the Baltic states, it could deploy better-equipped ground forces to the conflict zone faster than NATO could respond. As a result, many experts suggest Russia could seize all three Baltic capitals within a matter of days. While NATO air- and sea-power could slow the Russian advance, it would be unable to prevent it. The danger in this scenario is that if Moscow were to gain operational control over the Baltics, it is questionable whether NATO would have the political will to counterattack, or if such an operation would be left to individual Alliance members. This doubt weakens NATO’s ability to deter Russia and forces Alliance members to consider how they could better respond to Moscow’s aggression.

In response, NATO’s Eastern states must develop affordable options capable of defeating Russia’s heavy systems. Suppressing Russia’s mobile anti-air units would begin to erode Moscow’s advantage. Once those systems are degraded – if not destroyed altogether – it would be easier for NATO forces, particularly air and sea capabilities, to penetrate Russian airspace and first target its long-range artillery, MLRS, and later its armor. With their heavy formations weakened, Russian forces would be more vulnerable to the better equipped and trained NATO medium and light formations.

To implement such a strategy, the US should immediately partner with Poland to develop a new model of short-range cruise missile. The low altitude flightpath and maneuverability of cruise missiles make them difficult to intercept. Additionally, these systems are affordable, so can be fielded in significant numbers. Most importantly, the US and Poland should develop a cruise missile that can be air-, ground-, and sea-launched while convertible to medium- or intermediate-range. Such features are not financially or technically overbearing. While the US and Poland are pursuing air– and sea-launched capabilities already, a common system would be useful to reduce costs. Different launch platforms will challenge Russian countermeasures. Extended range will allow Poland to hold at risk targets east of Belarus and north of the Baltics, a necessary feature for such missiles’ use against deploying Russian forces.

Delaying Russia’s ability to gain military control of the Baltics is politically vital. Experts in Europe and the US have speculated that a decisive victory for Moscow in toppling the Baltic States could make a NATO military response less likely. Even if US and Western European NATO forces suffer fatalities during the initial conflict, those losses may not justify the possibly greater casualties from a counteroffensive. Russian officials and academics have suggested similar views. That NATO might seriously consider conceding the region to Russia suggests insufficient political resolve in the Alliance, thereby weakening its ability to deter Russian aggression in the first place. However, slowing Russia’s initial offensive and diminishing the operational effectiveness of its forces would likely encourage a stronger NATO response. Rather than fighting to liberate territory, the Alliance would be deploying forces to protect member states. Moreover, degraded Russian conventional forces would present an increasingly vulnerable opponent. Consequently, Poland’s ability to degrade Russian heavy formations within the first minutes or hours of a conflict would have a powerful impact on how a Baltic war was prosecuted.

Direct US cooperation with Poland is a powerful display of Washington’s ability to circumvent NATO paralysis. For decades, Western and Southern European states have cut defense spending and questioned the value in defending Eastern European states against Russian aggression. Yet, Russia’s invasions of Georgia and Ukraine demonstrate that Moscow is prepared to invade its neighbors whenever and wherever it sees fit. By working directly with Poland, the US will clearly demonstrate its willingness and ability to strengthen the forces needed to deter Russia and assure the states which are most under threat. In parallel, Washington will be reminding isolationist and pro-Russian factions in Berlin, Paris, Rome, and elsewhere that they cannot forfeit Eastern Europe to Russia. Such individuals can either support necessary measures to strengthen Eastern Europe’s deterrent against Russia, or they can forfeit their influence. Thus, US-Poland cooperation will have a positive impact in strengthening NATO capability and resolve against Russia.

Reinforcing Poland’s defense capabilities, given its central location within Eastern Europe, will position Warsaw as a pivotal regional centerpiece in opposing Moscow’s aggression. From Norway in the north to Romania and Bulgaria in the south, Poland is crucial to NATO’s ability to manage a broader front against Russia. Should conflict emerge, the ability to hold Poland will secure the most direct routes along NATO’s eastern border. As a result, the Alliance will be able to make use of its quantitatively superior forces by threatening Russia along the full length of its western border. Moreover, as a conduit to the Baltics, Ukraine, Romania, and even the Caucasus, Poland is an ideal staging ground for supplies and forces coming from the US and Western Europe. Especially if NATO hesitates in fulfilling its commitments, the states most likely to defend the Baltics will be the Eastern Europeans. Without access through Poland, it will be much more difficult for these states to reposition forces in the region. Additionally, a stronger Poland can threaten Russia’s forces in Kaliningrad. Therefore, a more militarily capable Warsaw is necessary to improve deterrence against Moscow.

US cruise missile cooperation with Poland will also send a clear message to Russia that Washington will not tolerate Moscow’s violation of the Intermediate-range Nuclear Forces (INF) Treaty. This agreement prohibits the US, Russia, and former Soviet republics from developing ballistic or cruise missile systems with ranges from 500-5,500 kilometers (km), which the Russians have violated surreptitiously. Poland’s new, short-range cruise missile could allow Warsaw to extend NATO’s missile strike range further than 500 km. Unilaterally extending its range is well within Poland’s rights, because it is not a signatory to the INF Treaty. This capability would provide Europe with a prompt response option against Russian aggression, thus strengthening NATO’s deterrent. Improving the Alliance’s ability to impose costs and deny benefits against Russian aggression is precisely what Moscow attempted to constrain by agreeing to the INF Treaty in 1987. As a result, there is no better way to respond to Russia’s INF Treaty violation than by developing options similar to what motivated Russia to negotiating the original agreement.

US-Poland cooperation to develop a new, short-range cruise missile is needed to enhance Eastern Europe’s deterrent against Russian aggression. Moscow’s heavy ground formations are a significant challenge to the former Soviet republics and Warsaw Pact states. Without comparable conventional forces and given concerns about Western and Southern Europe’s commit to NATO’s collective defense, these states must develop alternative, affordable means to hold Russian conventional forces at risk. The proposed short-range cruise missile – capable of being air-, ground-, or sea-launched – enables Eastern European states to hold at risk Russia’s anti-air systems. Without anti-air capabilities, Russia’s long-range artillery, MLRS, and armor would be much more vulnerable. Consequently, NATO members would be better positioned to target the remaining force multipliers among Russia’s conventional forces. Without these systems, Moscow would lose its advantage in heavy formations, thereby allowing NATO to leverage its superior technology and training. While Poland developing a new short-range cruise missile will not solve this problem by itself, doing so will begin to turn the tide against Russia.

Image: A JASSM cruise missile, a US type already in use by the Polish Air Force.