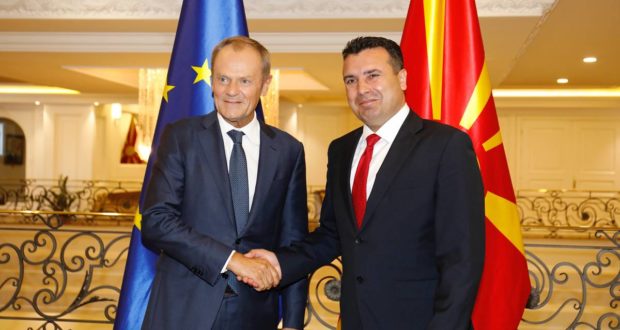 On 18 October, the European Council failed to agree on starting membership negotiations with Albania and North Macedonia. While the Netherlands and Denmark joined France in voicing an opposition to the opening of accession negotiations with Albania, Paris stood alone in arguing that North Macedonia is not ready to start its membership talks. The vote showed that, when all is said and done, it is the vision of what the European Union should look like rather than its impact that matters most to some of its member states. The European Commission’s calls for unity and a decision to reward the two Western Balkans countries’ progress, as well as assist them on their path towards democratic development, fell on deaf ears – and one country showed, once again, that internal interests are more important than external achievements.

Reaction to the vote was quick and fairly homogeneous, with many European Union leaders condemning the “no” decision as a “historic mistake”. Albanian Prime Minister Edi Rama blamed the failure to receive a green light on internal divisions in Brussels, a sentiment echoed by a host of European Union officials. North Macedonia’s Prime Minister Zoran Zaev resigned, and snap elections are now set to take place on 12 April. For the country that took painful steps to solve its 27-year name dispute with neighbouring Greece, the frustration and disappointment were palpable – this was neither the promised course of events, nor the appropriate outcome for Skopje’s efforts and actions.

The justifications for this reluctance to provide Albania and North Macedonia with a starting date for their accession negotiations ranged from doubts over the two Western Balkan countries’ readiness for membership of the European Union, to concerns over the readiness of the European Union itself to integrate them. French President Emmanuel Macron argued that before enlargement can move forward it is in dire need of an overhaul, and that a thorough reform of the accession process should take place before any other countries embark on this journey. Macron also voiced a sentiment that seems to be echoed by his Dutch and Danish counterparts, at least when it comes to Albania – that the progress made by Tirana and Skopje is simply not enough to deem them worthy of becoming members.

Although these justifications are not entirely unreasonable, the question at the European Union leaders’ meeting last month was not whether or not Albania and North Macedonia are ready to join the Union, it was whether or not they are ready to begin a process that could last at least a decade. Despite undeniable progress in key areas, both Tirana and Skopje have a long way to go until they can be deemed close to reaching their integration goals. As cases of both previous and current candidate countries have shown, however, opening accession negotiations can mean nothing more than the start of a long and difficult journey, the end of which depends on a variety of factors. A ‘yes’ decision on 18 October would have merely been a positive signal that reform does indeed get you somewhere – and without this positive signal, whether the benefits of reform can justify the costs will become a question more frequently asked.

Similarly, enlargement and the accession process can and have been reformed while simultaneously working with candidate countries to bring them closer to achieving their goals. Every round of enlargement has been altered based on previous experience, and the tougher criteria and longer wait periods reflect lessons learned from integrating the European Union’s latest member states. The proposed reform to the negotiations process – which would allow the European Union to re-open previously closed chapters – is not outlandish, as recent democratic backsliding witnessed in countries like Hungary and Poland, alongside the sheer scale of corruption and organised crime still present in countries like Romania and Bulgaria, are valid grounds for a more cautious enlargement approach. To argue that everything around it should stop while enlargement reform is taking place, however, means to not understand how and when reforming enlargement is more likely to achieve positive results – or to understand this perfectly, and use it as an excuse to stall.

The renewed decision to postpone opening negotiation talks with Albania and North Macedonia, then, had a set of additional motivations. With the Netherlands stating that they are willing to change their minds if France does too, and Denmark only rejecting Albania, Paris seems to have confirmed a long-held belief that, for this founding member, enlargement is no longer the way forward for the European Union.

A closer look at current events, however, shows that President Macron’s apparent adherence to France’s traditional vision – a European Union with the inner six at the centre, and Eastern members around the periphery – is also a convenient and elegant means to kill a number of birds with one stone. With the United Kingdom on its way out, and Germany in the midst of a political crisis, this is an ideal time for France to take the leadership role in Brussels. Under the guise of ensuring that a French version of the European Union is being upheld, Macron can take centre stage as a self-envisaged saviour of the European project – and a protector of French values and interests abroad. This is especially important in light of his difficult situation at home, where a recent series of protests and his failure to appropriately react to them have shaken his already fragile political support. As the French president is struggling to get at least some of his popularity back, he cannot afford to alienate his people further – and a tough stance in Brussels seems to be serving him well.

Unfortunately, what this self-centred approach actually does is to undermine the European project, and it does nothing to support the argument that painful reform will mean something in the long run. This version of Europe looks more like the United Nations’ Security Council: a select club for the chosen few, where long-time members have all the power, and newcomers are forever treated as outsiders. In the case of the European Union, this is an even more dangerous approach, as it goes against Brussels’ supposed goals and values, and threatens to significantly diminish the influence that it hopes to maintain in the region. The Western Balkans are not a group of countries without options – and Moscow’s recent invitation for Albania and North Macedonia to join the Eurasian Union should be seen as a reminder of this.

The European Union’s motto – “United in diversity” – was not at the heart of this decision to postpone opening accession negotiations with Albania and North Macedonia. Especially in times of Brexit, this was a – now missed – opportunity to show that being part of the European Union is still the best way forward for European countries, and that commitment and support are alive and well on the part of Brussels. For better or worse, the Western Balkans will adapt to this disappointment, as they have done time and again over the decades. Like in any relationship, however, if the feelings are not mutual, there is little sense in only one partner making the effort to keep the relationship alive. The candidate countries will find it increasingly difficult to justify the hardships that are the inevitable result of working towards the membership goal – especially when that goal seems to be farther and farther out of their reach.

2019-11-11
Irena Baboi
Previous: Putin emerges as the Tsar of Syria following US military withdrawal and Turkey’s onslaught against the Kurds
Next: A Warning for the West: Russia Continues to Strengthen its Arctic Presence