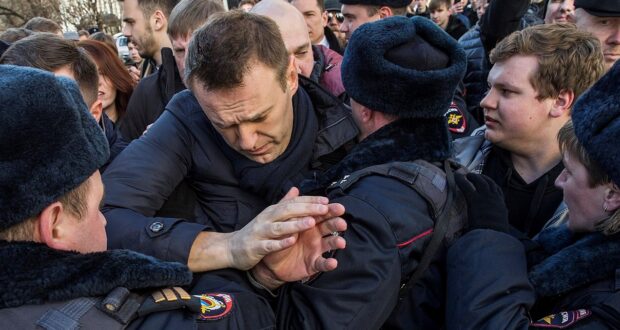 Earlier this year, I wrote a report on the poison plot hoax that had taken place in Prague, in which three senior political figures were put under police protection as a result of a tip-off that claimed there was a Russian plan to poison the three officials. While the plot turned out to be a fabrication, I argued that the strong Czech response was indicative of the growing threat of Russian ‘wetwork’ in contemporary society and that poisonings and assassinations of political opponents and dissidents had essentially become state policy for the Kremlin.

Two months later, anti-corruption campaigner and leading Russian political oppositionist Alexei Navalny has been poisoned with the nerve agent ‘Novichok’. On 20 August, Navalny took a flight to Moscow from Siberia but fell severely ill shortly after take-off, prompting the captain to make an emergency stop in Omsk where he was rushed to hospital. Video footage taken on the plane shows Navalny screaming in agony and reports claim he lost consciousness before the plane landed in Omsk. Initially, Navalny’s wife and a personal doctor were barred from seeing him, while hospital staff refused to either show test results or allow Navalny to be taken to Germany for treatment.

Eventually, however, he was airlifted to Berlin’s Charite Hospital where he spent 24 days in intensive care. While Russian doctors said they found no trace of any poisons in Navalny’s system, German tests, corroborated by tests in Sweden and France, determined that the Putin critic had been poisoned by the Soviet-era nerve agent Novichok – the same substance used in the Skripal poisoning in 2018. Navalny’s associate, Leonid Volkov, wrote on twitter that the use of Novichok was the equivalent of the Kremlin leaving their autograph on the crime scene, and with the international community now demanding a full and transparent enquiry into the incident, it appears that this is yet another sign that the Kremlin’s grisly method of dealing with dissidents has indeed become an intrinsic facet of state policy in Russia.

Navalny emerged as the de-facto leader of Russia’s democratic opposition in the months leading up to the 2012 presidential election and he has since sought to bring an end to Putin’s grip on the presidency. While he has been banned from appearing in state media, Navalny has utilised social media outlets such as Twitter and YouTube to challenge the Russian Government and has amassed a significant following online, with one video accusing Dimitry Medvedev of corruption accumulating over 30 million views within a few months. His political work has resulted in his repeated arrest and imprisonment in Russia; in 2018 he was barred from running for the Russian presidency due to an embezzlement conviction, something Navalny claims was fraudulent and politically charged. He has also paid a physical price for his work. In 2017 he was nearly blinded in one eye in an attack with green dye, while he was taken to hospital in July 2019 with symptoms of poisoning.

While Navalny’s political work has certainly made him a thorn in the side of Vladimir Putin, analysts such as Mark Galeotti have argued that it was Navalny’s anti-corruption campaigning that made him a real target. Galeotti stated that every Russian has had experiences with corruption and Navalny has worked to eradicate this issue for the past 20 years via his Anti-Corruption Foundation. The foundation has sought to investigate the wealth of Putin and his associates and has produced numerous reports detailing extensive property holdings of the political elite -something which has generated huge protests in Russia.

Poison has typically been used when targeting Russian dissidents for a number of reasons. Poisons such as Gelsemium, Thallium, TCDD, Sarin and now Novichok have all seen use in the Putin era because they are discreet, they evoke fear as the victim suffers publicly, and they provide some degree of deniability. However, while leading figures in the Kremlin such as Dimitry Peskov and Sergei Lavrov have denied any wrong doing, and while it is difficult to prove concretely that the orders for the poisoning came directly from the Kremlin elites, the use of Novichok points the finger of blame directly at Putin.

Targeting the leading oppositionist with such a discernible poison therefore seems puzzling, given the death of Navalny would surely have galvanised the opposition in Russia. But when one considers the bigger picture, we can gauge some understanding of why Navalny was poisoned now.

Protests to the west in neighbouring Belarus and to the east in the city of Khabarovsk in Siberia have potentially spooked the Kremlin into action. In Belarus, a rigged presidential election that saw Alexander Lukashenko take 80.1% of the popular vote against the popular opposition candidate Svetlana Tikhanovskaya, has prompted tens of thousands of Belarusians to take to the streets of Minsk in protest. While Lukashenko still sees himself as the leader of Belarus, his position is illegitimate and there is surging momentum for new leadership in the country. To the east in Siberia, locals in Khabarovsk have been protesting for weeks against the dismissal and arrest of popular local governor Sergei Furgal, while there are local elections scheduled to be held in various Siberian cities soon – cities that Navalny had been visiting on his trip to the region. This popular revolt, combined with the prospect of a potential Joe Biden presidency in the US, may just have tipped the balance and eradicated whatever patience the Kremlin had left for someone like Navalny.

No explanation justifies such an act, however, and the international community are under pressure to hold Russia to account over the matter. While the President of the European Council, Charlès Michel, voiced his concerns to Vladimir Putin over a phone call and European leaders such as Angela Merkel have demanded explanations from Moscow, there has been little movement towards actually sanctioning Russia.

Contrary to the Skripal case in 2018 when former Soviet spy, turned British citizen, Sergei Skripal was poisoned on British soil, resulting in a mass expulsion of Russian diplomats from across the world, Navalny’s poisoning on Russian soil makes it a different incident altogether. While Josep Borrell, EU chief of foreign policy, did not rule out sanctions, reports indicate that there is little desire among larger European states for such measures.

One alternative would be to suspend the Nord Stream 2 project, a $9.5 billion venture which aims to create a pipeline under the Baltic Sea from Narva Bay in Russia to Lubmin in Germany. The project is currently 95% finished and will bring in natural gas to meet Germany and Europe’s energy needs, something that is seen as a necessity in Germany as EU domestic gas production has declined rapidly in recent years and Germany is in the process of completely phasing out nuclear power in the country.

The project has come under intense scrutiny, however. The US, the Baltic States and other Eastern European countries have criticised the project for helping to boost Russia’s geopolitical power on the continent. There is already a gas pipeline under the Baltic (Nord Stream 1) along with additional pipelines running through Ukraine and Belarus into Europe and there is a worry that the pipelines could become a key political instrument for Putin, who could theoretically turn of gas supplies to Ukraine and Belarus while still supplying Europe with the fuel it needs.

Calling a halt to a project that is so close to completion and has already cost such a gargantuan amount of money would be a tough decision to make and would hurt European investors considerably. But it is an option. The Nord Stream 2 pipeline will have the capacity to ship 55 billion cubic metres of gas a year, yet the existing pipelines crossing Ukraine have roughly 77 billion cubic metres of spare capacity currently – a figure that will rise to 102 billion cubic metres in two years’ time. In theory, should the project be dropped, Europe could still access the natural gas it needs and would be able to approach other potential suppliers of gas, such as the US to fulfil whatever shortcomings there may be. While it would be a costly decision to make, halting the Nord Stream 2 project would hit the Kremlin where it hurts and make clear that these poisonings, assassination attempts and murders will not be tolerated.