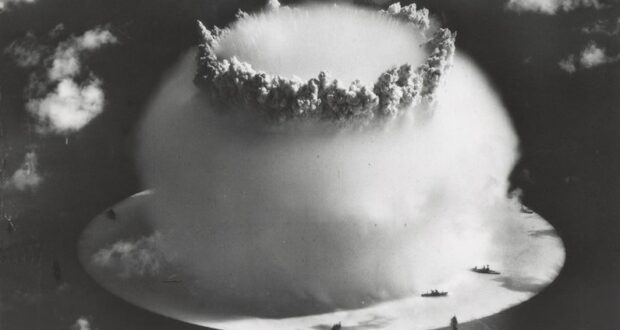 In 2014, the Marshall Islands (RMI) attempted, unsuccessfully, to use International Law to compel States to disarm their nuclear capacities. With the Treaty on the Prohibition of Nuclear Weapons set to enter into force in January 2021, the RMI’s earlier attempt to have States’ legal obligations clarified is relevant to the discussion on the legal status of nuclear disarmament in International Law. The RMI has openly protested the existence of nuclear weapons since the US conducted nuclear tests on atolls in the country in the 1940s. This objection to nuclear weapons culminated to the RMI filing Applications to the International Court of Justice (ICJ) against the nine countries in possession of nuclear weapons – the Nuclear Weapon States (NWS). Proceedings against China, France, Israel, North Korea, India, Russia, and the US did not ensue, as these States have not recognised the Court’s jurisdiction. Litigation against India, Pakistan and the UK proceeded. The RMI’s claims against these countries centred on their failure to disarm their nuclear capacity.

As both the RMI and the UK are party to the Treaty on the Non-Proliferation of Nuclear Weapons (NPT), the RMI contended the UK was not fulfilling its disarmament obligation contained in Article VI of the NPT. Article VI requires States “to pursue negotiations” for disarmament in good faith. Based on a contextual interpretation of the preambular paragraph of the NPT, this obligation does not require all States to immediately disarm, but to take active steps towards disarmament.

As India and Pakistan are not parties to the NPT, this legal route was not available to the RMI. Instead, the RMI Marshall Islands submitted that India and Pakistan should disarm on the basis that the obligation to pursue disarmament is universally legally obligatory, by virtue of being Customary International Law (‘CIL’). The ICJ articulated in its North Sea Continental Shelf ruling on the delimitation of the continental shelf between Germany, Denmark and the Netherlands, that a norm will be crystallised as CIL – and therefore legally binding on States – when there is sufficient State Practice and opinio juris. Opinio juris exists where there is evidence the State believed their actions obligatory due to the existence of a rule. State practice must be geographically widespread and legally and politically representative. The Marshall Islands contended that Article VI was CIL, based on the fact the NPT has been ratified by 190 states.

However, the Court never had to decide whether the UK had breached the NPT, or India and Pakistan had breached an obligation contained at CIL. All three States submitted that the Court did not have jurisdiction over this matter due to the lack of a “dispute”, which is an element of jurisdiction per Article 36 of the ICJ Statute. In all accounts, the Court found there was no evidence of a “dispute” and thus did not proceed to the merits.

By not proceeding to merits, the Nuclear Arms Race Cases did not force the ICJ to decide whether the obligation to begin disarmament is reflective of CIL. As a result, there remains ambiguity in the jurisprudence over whether disarmament is normative. In the ICJ’s Advisory Opinion on the Legality of the Threat or Use of Nuclear Weapons (1996), the Court unanimously recognised the importance of Article VI of the NPT, and interpreted it as containing an “obligation to achieve a precise result – nuclear disarmament in all its aspects.” However, the Court also indicated that there is no source of law – CIL or treaty – that explicitly prohibits the possession or use of nuclear weapons, so long as they adhere to international humanitarian law.

The Court’s comment in this Advisory Opinion that States ought “to pursue in good faith and bring to a conclusion negotiations leading to nuclear disarmament in all its aspects under strict and effective international control” was reaffirmed by the Court in the Nuclear Arms Race Cases. But as with the Advisory Opinion obiter, neither comments create legal obligations. Instead, their value is in that they may strengthen the case of an emerging global norm against nuclear weapons.

Similarly, the Nuclear Arms Race Cases had further normative effect by mobilising other States around disarmament. Director of programs and operations at the Nuclear Age Peace Foundation, Rick Wayman, said that “other non-nuclear countries will be inspired to step up, demand justice and take action.” There are some signs that the Marshall Islands case has invigorated the international anti-nuclear weapons lobby. Austria, Brazil, Ireland, Mexico, Nigeria and South Africa are currently pressing for a UN General Assembly resolution for “a legally binding instrument to prohibit nuclear weapons.” Again, this may indicate there is more State Practice converging – a sign that nuclear disarmament may be CIL.

Yet the question of whether disarmament is CIL is not just disputed by States, but also by the academic community. The fact the NPT has many ratifications and is largely complied with is probably not enough evidence of State Practice. State Practice and opinio juris of the States not party to the NTP is also relevant. The International Law Association’s 2000 Report confirms the importance of NWSs’ actions by indicating that “if [specially affected States] are represented, it is not essential for a majority of States to have participated”. The fact NWSs are not taking steps to disarm indicates they do not believe efforts to disarm to be obligatory, and thus that the opinio juris element may not be satisfied.

On the other hand, recent developments in international law are changing the post- Nuclear Arms Race Cases legal landscape of nuclear disarmament. On October 24 2020, the UN Treaty on the Prohibition of Nuclear Weapons reached the required 50 state parties for its entry into force. Again, the fact NWSs have not ratified is detrimental to an argument that this treaty conclusively indicates disarmament to be CIL. However, it adds further weight to the argument that a nuclear weapons ban is gaining international traction and thus becoming normative.

Given this recent development, the status of disarmament in international law becomes more ambiguous. For States’ legal obligations to be truly indisputable, the ICJ would need to face further litigation on disarmament. The Court’s decision in Nuclear Arms Race Cases regarding the lack of ‘dispute’ suggests it may be difficult for States to successfully bring nuclear disarmament litigation to the ICJ. However, the fact the justices in Marshall Islands v. UK were evenly split on the existence of a dispute suggests that it is possible a different series of Justices may have come to a different conclusion on whether the Court has jurisdiction over this type of dispute. Again, this suggests further litigation could be exceptionally valuable in clarifying the law on nuclear disarmament.