Home / Asia and Pacific / A Soldier in a Child

By AnnaMaria Donnoli via Wikimedia Commons

By Zhenjie Im.
24th October 2013, Human Rights and Conflict Resolution, Issue 4, No. 3.
Download as a PDF
It was admittedly tiring to have to carry out one interview after another in the humidity and heat of the tropics. The weather had been as unrelenting as my bout of flu. I was very much relieved to step into a small zinc-roofed house with an air conditioning system for my next interview that Matet, my ever bubbly and spirited interlocutor, had arranged for me. I had been scheduled for an interview with a prominent non-governmental organisation (NGO). Matet explained to me that members of this foundation worked directly on the ground to assist the people of Mindanao regardless of their religion, descent or heritage with reconstructing and rebuilding lives after human and natural disasters. I was going to be interviewing the NGO workers in Cotabato City. But little did I know that the last interview of the day would perhaps be one, which would be full of surprise.

I was to interview three individuals (names have been changed for this article) – Nicole, the NGO’s director, James and Jamal (both support staff of TRIPOD) – the last of whom was to take the spotlight of the interview. It was not unexpected that he would be at the centre of the interview. He was the oldest of the three. Dark-skinned with creases along his forehead, a squared jaw and signs of facial wrinkles, Jamal gave the impression that he had been through much of Mindanao’s conflict-ridden history. However it was beyond my guess that this thin man dressed in a simple grey polo shirt was to effect a change in my opinion and perception of child soldiers.

Seated around an oval table draped in a blue tablecloth, Jamal introduced himself as a “peace builder” with the group, assisting in talks between the Dulangan Manobo and Maguindanaon people over a land conflict. With a deep yet soft-spoken voice, he explained that he wanted to extend his experience as a peace builder to help such communities locked in conflict.

But what made him a peace builder in the first place? That was something that interested me. Peace builders are often themselves victims of war. I was keen to hear if he had also been a victim of the long-standing Mindanao conflict.

“I first fought against the military for eight months. I had no choice,” Jamal revealed in response to my aforementioned curiosity.

“Why did you have no choice? Why didn’t you choose to run away?” was my immediate reaction.

Jamal looked at me in the eye, with one arm on the table and the other gesturing, “my relatives were killed. 200 of my relatives [were] dead. 200 victims of martial law.” The emphasis on the number and identity of the dead could not be any clearer. Yet, contrary to what I had expected – a possible start of a run of emotions – Jamal was calm and composed. There was seemingly no anger or sadness. He did not fit the bill that modern media such as Hollywood had painted that any man who had lost that number of relatives at such a young age would be – emotionally depressed and psychologically traumatised. Jamal’s measured response was indeed in direct contrast to my conception.

“How old were you when you first fought?”

“Fourteen.” He was a child soldier. Oddly, there were grins and chuckles among others in the room. 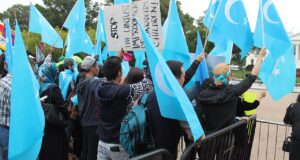 The silenced voices of the Uighur Muslims