Home / Counter-Extremism / Will Washington and Ankara finally work together in Northern Syria? 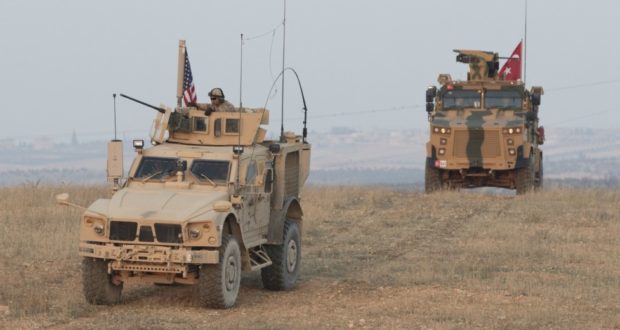 Will Washington and Ankara finally work together in Northern Syria?

It seems that the crisis over Syria between Washington and Ankara is over, at least for now. The two NATO allies have agreed on concerted actions in Northern Syria, the region east of the Euphrates River. At a three day-long bilateral meeting in the Turkish capital in early August, representatives of the two governments negotiated their joint plan

That plan includes a commando base in Turkey which will manage and oversee a safe zone. This zone is meant as a so-called “peace corridor” for Syrian refugees who want to return to their country. The agreement, however, does not include specific details about the geography of the “peace corridor” nor any time schedule, while the Turkish foreign minister has already made clear that his government wants to move forward with its plan as soon as possible.

The term “peace corridor” was already included in a written statement of the Turkish security council that met on 31 July. Sezai Temelli, co-chairman of the Kurds-friendly HDP, criticised the euphemism regarding a “peace corridor”: “Peace or a ‘peace corridor’ cannot be defended by tanks, weapons and drones. If you want to establish real peace, look for a way to reconcile with Kurds.” The Syrian regime also voiced its anger about the agreement, saying that it is a “blatant attack” on the sovereignty of Syria.

The vaguely worded joint statement of Washington and Ankara can be seen as a hint that the differences between both sites have not been put aside. Foreign minister Mevlüt Çavuşoğlu stated a few days after the agreement that Turkey wants to “clean” the area east of the Euphrates River from “terroristic subjects … no matter what”. The US government, however, primarily intends to keep Turkey from solitary military actions.

The most controversial subject for both sides has always been the safe zone and the question of how deep it should reach into Syrian territory. While Turkey prefers a corridor of at least 40 kilometres into Syria, the US wants to go no further than ten kilometres. If Washington gets its will, plenty of strategically important cities near the border would not be included. Additionally, the Turkish military could only use highway M-4 which goes from Aleppo to Qamishli to the Northern Iraqi city of Mosul as a conduit for its operations.

Defence minister Hulusi Akar has made it clear that his country would not agree to any compromises: “The security zone in Syria is to extend 30 to 40 kilometres into Syrian territory from the Turkish-Syrian border line. We expect the US to take steps in this direction,” Akar told news channel NTV. If the US pursues a different solution, he stated that his country will apply “Plan B or C”. Akar did not say exactly what he meant by this, but it was clear that the former chief of the general staff was alluding to a cross-border military operation in the neighbouring country.

The Kurdish news agency Mezopotamya claimed that details of the agreement between Turkey and the US had been leaked to them. According to the agreement, the security zone will be established in an area that is 100 kilometres wide and five kilometres deep. No fighters of the Democratic Forces of Syria, which consists mainly of Kurdish militias of the YPG, are allowed to stay in this zone. All heavy weapons which are in a territory up to 20 kilometres from the Syrian-Turkish border are to be withdrawn accordingly.

A few days after the joint statement, a six-member delegation of the US military arrived in Turkey. Together with their Turkish partners, they are to set up the joint command centre near the megacity Şanlıurfa not far from the Turkish-Syrian border.

In the recent past, Recep Tayyip Erdoğan threatened again and again to intervene in the north of Syria and let tens of thousands of soldiers march up at the border. “It is our highest priority to dry up the terrorist swamp in Northern Syria,” he declared while negotiations with the Americans were still ongoing. Alluding to the “Euphrates Shield” and “Olive Branch” operations Ankara conducted in northern Syria in 2016 and 2018 respectively, the president said the process that began through these previous Turkish offensives would “very soon” enter a “new phase”. US secretary of defence Mike Esper then—immediately after his appointment to office—warned Turkey against acting alone in Syria.

The agreement that has now been reached should avert a deployment of the Turkish military for the time being. But the statement is so vaguely worded that the agreement could be overturned by one side or the other at any time. The interests of the two NATO partners in Syria are still often diametrically opposed: While Ankara wants to prevent at all costs that a contiguous and largely autonomous Kurdish territory emerges on the other side of the border that could fuel the separatist efforts of the indigenous Kurds, the US sees in the Kurdish YPG militias the most powerful force in the fight against the “Islamic state” and supports them with weapons and military advisors.

Washington has promised to the Kurds that Turkey would commit to security guarantees before the US withdraws from Syria. At the moment, almost 1,200 US soldiers are still stationed in the country. Ankara also plans to return Syrian refugees to the safe zone. Turkey has welcomed almost 3.6 million Syrians since 2011—by far the largest number worldwide. But the pressure on Erdoğan from within his own ranks to send back at least some of these refugees is growing. The Syrian refugees are held responsible both for Turkey’s economic problems and indirectly for the defeats of the AKP in local elections.

Representatives of Syrian Kurds were cautiously positive about the agreement, but continued to warn of a “big war” if the US does not succeed in keeping its NATO ally from invading. “We want a political solution and dialogue,” Reuters quotes an advisor to the Kurdish autonomous administration as saying. But the recent past has shown that the US is hardly able to prevent Ankara from further military action in Northern Syria.

Meanwhile, another crisis, which has contributed significantly to bilateral alienation between the US and Turkey, continues. After the first part of the delivery of the Russian S-400 missile defence system to Turkey had been completed in July, Turkish defence minister Akar announced that the second delivery phase would start at the end of August or beginning of September. Furthermore, it remains uncertain whether Turkey will actually deploy the Russian system and thus further provoke the US. Whatever the progress made in Syria, the relationship between Ankara and Washington will remain volatile for some time to come.

Image: US and Turkish forces conduct joint patrols on the outskirts of Manbij, Syria, November 2018 (Source: US Army/Spc. Zoe Garbarino)

2019-08-27
Constantin Eckner
Previous: Guest Opinion: Turkey should be punished and kicked out of NATO
Next: The Climate Crisis and Evolving Geopolitics: Lessons from the 2019 Pacific Islands Forum