Home / Asia and Pacific / Coping with the past and the present: India’s Security Strategy in the light of the Kashmir Conflict 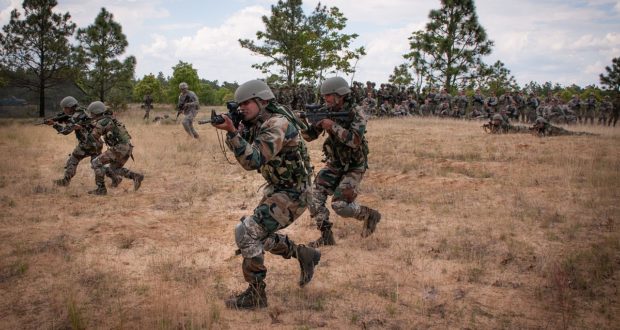 Coping with the past and the present: India’s Security Strategy in the light of the Kashmir Conflict

India is a special place. The multi-ethnic, multi-religious country is considered to be the largest democracy in the world and on the verge of becoming one of the super-nations on Earth alongside the United States and China. But while India’s economic future may be global, its security issues are very much local.

For some time, India did not have a cohesive national security strategy. The Indian National Security Council was put in place in 1999, yet even ten years later an official strategy paper has not been penned—a fact which draws criticism from many security experts in the media and think tanks who intensely discussed what India’s security policy should entail. Still, there has never been a consensus on how to deal with the three major issues: the challenges from Pakistan and China, and the threat stemming from terrorism.

India’s security policy-related goals remain very much an unknown to those outside the Narendra Modi-led government and military. As a result, when India gets into an altercation with Pakistan, for instance, as happened in late February and early March this year, the events come somewhat as a surprise—especially to the non-Indian public. The conflict with Pakistan, however, tells a lot about the current state of India’s security strategy.

We have to view the relationship with Pakistan in the context of the history of both countries—particularly the violent partition of British India in 1947 and the conflict about the Kashmir region. On top of this, Northern India and Pakistan overlap in areas of certain demographics and shared lingua francas—with Punjabi and Hindustani being the most notable ones.

Since their independence, India and Pakistan have fought three major wars, one undeclared war and have been involved in numerous armed skirmishes. The Kashmir conflict is the central point of all of these engagements with the exception of the Indo-Pakistan War of 1971 and Bangladesh Liberation War. The current conflict between the countries also revolves around that particular region.

Why is their fight over Kashmir?

Many people in the territory reject being governed by India, preferring instead either independence or union with Pakistan. The population of the Indian-administered state of Jammu and Kashmir is more than 60 per cent Muslim, making it the only state within India where Muslims are in the majority. High unemployment and complaints of human rights abuses by security forces battling street protesters and fighting insurgents have aggravated the problem.

Violent insurgency in the state has ebbed and flowed since 1989, but the region witnessed a fresh wave of violence after the death of 22-year-old militant leader Burhan Wani in July 2016. He died in a battle with security forces, sparking massive protests across the valley. Wani is credited with reviving and legitimising the image of militancy in the region. More than 500 people were killed in 2018—including civilians, security forces and militants—the highest such toll in a decade.

The bloody summer of street protests in Indian-administered Kashmir in 2016 had already dimmed hopes for a lasting peace in the region. In June 2018, Modi’s Bharatiya Janata Party pulled out of a coalition government run by the People’s Democratic Party. The state has since been under direct rule from Delhi, which fuelled further anger.

The death of more than 40 Indian soldiers on 14 February 2019 in a suicide attack has ended any hopes of a thaw in the immediate future. India blamed Pakistan-based militant groups for the attack—the deadliest targeting Indian soldiers in Kashmir since the insurgency began three decades ago. Following the bombing India said it would take “all possible diplomatic steps” to isolate Pakistan from the international community. On 26 February, it launched air strikes in Pakistani territory which it said targeted militant bases.

Pakistan denied the raids had caused major damage or casualties but promised to respond, fuelling fears of confrontation. A day later it said it shot down two Indian Air Force jets in its airspace after Pakistani planes struck targets in Indian territory. The situation eased when Pakistan returned the Indian pilot, Wing Commander Abhinandan, whom Pakistan shot down during the confrontation and held custody for several days before releasing. Imran Khan, the Pakistani prime minister, urged India to settle matters through talks.

But Khan faces similar domestic pressure to his fellow prime minister. He was elected last year with the backing of his country’s powerful military. Modi, meanwhile, is up for re-election in May and eager to avenge a bombing that has stirred popular outrage. A vast majority of Indians despise Pakistan. According to a 2017 BBC World Service poll, only 5 per cent of Indians view Pakistan’s influence positively, with 85 per cent expressing a negative view. Modi sees himself forced to react to the general resentment towards Pakistan in order to conserve his popularity in India.

Despite its global ambitions, India and its population can still act small-minded. When it comes to its economic policy, the country needs outside investments to fund innovation and development, but traditionalists often dislike taking money from Europeans or Americans. And when it comes to its security policy, it is somewhat similar.

The issues with Pakistan are not just a matter of age old rivals that fight over a region and live out their hatred for each other. The conflict has become a matter of global interest, since both countries are nuclear powers and a war in 2019 could cause considerable havoc. Figures from the Stockholm International Peace Research Institute show India with 130 to 140 warheads and Pakistan with 140 to 150 nuclear weapons.

Moreover, China has become a close ally and financial patron of Pakistan. The Chinese urged both countries to exercise restraint after India’s foray into Pakistani airspace, but they are on the side of India’s opponent and have had their trouble with India over the years. In 1962, India and China engaged in a bloody border war and skirmishes have continued to break out sporadically throughout the subsequent years, most recently in the Doklam area in 2017. China is able to keep Indian attentions divided by keeping a close military relationship with Pakistan. There is a convergence with Chinese and Pakistani strategic thinking that has continued for five decades now. China also plays another role as Pakistan’s biggest arms supplier—with 42 per cent of Beijing’s military exports having gone to Pakistan between 2000 and 2014.

On the other hand, US foreign policy since Donald Trump took office has shifted away from Pakistan, a longtime recipient of American aid, toward India, which the administration views as a bulwark against China’s rising influence in Asia. The US could now get involved in the investigation of the shoot-down of the Indian MiG-21 jet in late February, as the Americans once sold F-16 fighter jets to Islamabad. The Indian Air Force said Pakistan used F-16s in the raid that brought down an Indian MiG-21 jet, in a possible violation of the terms of use by the US. Indian officials claim they recovered parts of an AMRAAM air-to-air missile that can only be used on those specific jets. Pakistan has stated it did not use any F-16s in the operation, though it has not specified what military equipment was involved. As part of the purchasing agreement, the US puts certain restrictions on how its military equipment can be used. It is unclear what restrictions were placed on the use of Pakistan’s F-16s.

Where should India go from here?

India has about three million military personnel compared to fewer than one million for Pakistan, according to the International Institute for Strategic Studies, but Delhi cannot focus them all on its neighbor to the west. Parts have to orientate towards India’s northeast and its border with China. With a defense budget six times the size of Pakistan’s, India has been on a rapid military modernisation program. It has more spending power and has been investing in platforms that Pakistan cannot afford. Among recent acquisitions are airborne early warning and control aircraft with Israeli technology and US airframes and US-made artillery it is deploying along the Kashmir line of control to replace 1980s’ Swedish guns. India wants even more new military technology, but it is often hamstrung by tight export controls from key suppliers like the US and Britain. That the Indian jet shot down was a MiG-21, a Soviet-designed aircraft in service since the 1960s, still forms the backbone of the Indian fleet with about 200 in inventory, is an example of the country’s modernisation challenge.

That illustrates a problem for India. While it has a massive military budget, a significant chunk of that goes toward maintenance of existing equipment, and salaries. Modernisation gets a mere 14 per cent of allocated funds, according to an Indian Parliament committee inquiry on military readiness last year. While Modi sees himself forced to play the strong man in the conflict, the current quality of equipment of the Indian military, the unlikely yet not impossible scenario of nuclear weapons getting involved and the threat of a two-front war with Pakistan and China may force Delhi into easing the situation and returning to diplomatic talks after a while.

2019-03-19
Constantin Eckner
Previous: Saudi Arabia and its Eastward Shift
Next: Balkan Spring on the horizon? Anti-government protests spread to Albania and Montenegro