Home / Latest Articles / Press Release: HSC Statement on the Situation in Israel and the Gaza Strip

Press Release: HSC Statement on the Situation in Israel and the Gaza Strip

The Human Security Centre is deeply concerned by the recent escalation of violence in Israel and the Gaza Strip, following the abhorrent killing of three Israeli teenagers and the apparent revenge killing of a Palestinian teenager in the West Bank. We are particularly distressed by the mounting human toll on both sides and strongly urge all parties to do their utmost to avoid the loss of more innocent life.

We condemn without reservation the ongoing rocket attacks on Israel aimed indiscriminately at the Israeli population. So far more than 550 rockets have been fired at Israel since July 8. Israel did not retaliate until Hamas had fired more than 150 rockets and had rejected a ceasefire. A restoration of the November 2012 agreement is only possible if Hamas ceases all aggression and, in return, allows Israel to scale back its military operations. The people of Israel have the right to live in secured borders without constant fear for their security.

The people of Gaza also have the right to live in peace. Whilst it should be acknowledged that Israel has gone to quite some lengths to minimise civilian casualties,  including widespread use of leaflets, phone calls, ‘knocking on the roof’ and even aborting airstrikes at the very last possible moment, more can and should be done. We would urge the IDF not to attack densely populated areas where civilian casualties are inevitable. At least 100 Palestinians have so far been killed and this is a heartbreaking tragedy for the families and community affected.

The Executive Director of the Human Security Centre, Julie Lenarz, said: “What is crucial now is to restore calm as soon as possible and to minimise civilian casualties. All parties have to be reminded of their obligation under international humanitarian law to spare the lives of the innocent. This is particularly true for Hamas. Not only does it target the Israeli population indiscriminately but also violates the basic human rights of its own population. I am particularly appalled by the policy of human shields with the sole purpose of maximising civilian casualties and escalating the violence further.”

The Deputy Director, Dr Dwayne Ryan Menezes, added: “How is it that people who are otherwise apolitical, apathetic or comparatively silent when it comes to atrocities perpetrated in other Middle Eastern states so ferociously concerned and vocal when Israel enters the scene? The inconsistencies, to me, suggest that the outrage over Palestinian civilian casualties has less to do with the tragic loss of human lives than it has to do with one’s political predispositions towards Israel.”

The Human Security Centre welcomes the efforts of the international community, led by the Middle East Quartet, and some of the neighbouring Arab States to restore the ceasefire and bring an immediate end to the fighting and return to negotiations. 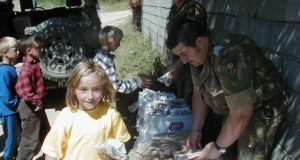