Home / Middle East and North Africa / Syria: what on Earth did we expect?
Surprise is surely the last thing we should feel at Foreign Secretary William Hague, reporting on Monday that there was increasing evidence that President Assad was using chemical weapons on his own people.

Syria: what on Earth did we expect?

Surprise is surely the last thing we should feel at Foreign Secretary William Hague, reporting on Monday that there was increasing evidence that President Assad was using chemical weapons on his own people.

It’s not as if it hasn’t been entirely predictable. For the last 18 months, the UN and governments of liberal democracies the world over have admonished and tut-tutted over the massacres which have taken place in Syria. But they have done precious little. The Obama administration, in particular, has made their lack of enthusiasm for intervention to stop the killing abundantly clear. A weighty UN resolution is clearly impossible without the support of Russia, a support which is unlikely to be forthcoming.

But geopolitics is a game which depends not just upon the actions you take. It depends also on the signals you send. These signals tell others what you will and will not do – the celebrated “red lines”. And the signal that governments the world over have sent is this: you can kill as many of your citizens as you like, President Assad – we’re not getting involved.

In the absence of external constraints, the combination of a desperate despot and a stockpile of chemical weapons was always an accident waiting to happen.

But await, too, some skepticism on the part of the Western media – and many politicians – to take any action because, well, “look what happened in Iraq”. And more so, now we have the involvement of the magical letters “WMD”. Sections of the British press, for example, made up their minds a decade ago that these letters signify something that Britain should never use as a pretext for intervention again.

Never mind that Saddam Hussein undeniably had them for years, whether they were found or not, and was clearly prepared to use them; talk to some Kurdish families if you need any evidence of that. Never mind that, in this case, the WMD threat is about internal massacres and not external aggression. No, we must not get involved.

The fact is that Syria is widely thought to have had chemical weapons since the 1970s, as security organisation NTI reports. It’s hardly a secret. Rather chillingly, it says of an attack during that early period:

“Syrian-born security analyst M. Zuhair Diab and Israeli military analysts both suggest that Syria may have planned to use its chemical arsenal only in the event of a total military collapse, which never occurred.”

In other words, the Syrian government has merely been restraining itself all this time. Forty years on, as just such a military collapse now edges nearer, it raises the spectre that it will now act increasingly like a cornered rat, using chemical weapons in one last, deadly attempt to reassert itself.

And there is already evidence of not just their ownership, but their use. In any event, with or without chemical weapons, conservatively estimated at 60,000  have already died since the start of the Syria conflict, having increased sharply in recent months. Add to that the efficiency of chemical weapons as a killing agent, casualties could soon suddenly be off the scale.

On 20 August 2012, President Obama warned, “a red line for us is we start seeing a whole bunch of chemical weapons moving around or being utilized.”

The important thing with red lines, as any leader – or, for that matter, any parent – will tell you, is that when you cross them action must be taken, in order to preserve your reputation as a person of your word (it will be interesting to see what exactly constitutes “a bunch”).

Without that, the careful framing of signal, precedent and response is broken, and an aggressor sees you for what you are: a weak leader making empty threats.

Given Obama’s words, we are about to see which of the two types of leader currently govern the Western allies, and a lot of lives will depend on which one it is.

But the most frustrating thing of all this: that, in these situations, the West invariably ends up getting involved in the end anyway, either out of strategic necessity or in the name of genocide prevention. Or merely, after everything is over, to keep the peace in a post-war truce or power vacuum.

The only real question is then how many people will die, entirely needlessly, before we get to that point.

Marchant, R. (2013) ‘Syria: What on Earth did we expect?’ Human Security Centre, Human Rights and Conflict Resolution, Issue 3, No. 2.

CW intervention Syria 2013-07-19
Rob Marchant
Previous: Syria: Should the West be more Proactive?
Next: Saddam – How We Got Him All Wrong 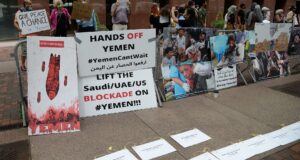 Failure to distinguish: How the recent Sa’ada prison attack adds to violations of humanitarian law in Yemen