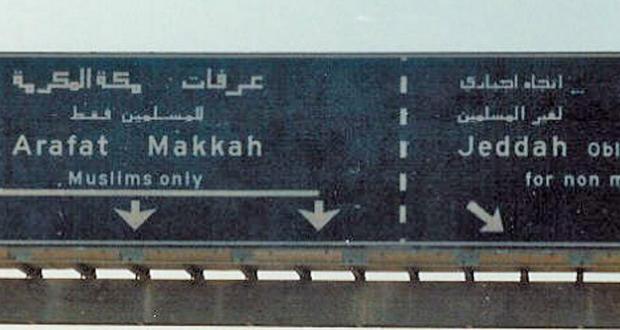 Religious freedom is substantially curtailed in more than half of the world’s nations and violations are indicative of a pattern of widespread and systematic attacks against civilian populations.

The Kingdom of Saudi Arabia belongs to the worst violators of religious freedom. Since 2004, Saudi Arabia has been a Country of Particular Concern (CPC) under the International Religious Freedom Act and in July 2014, the US Secretary of State again placed the country on the list of CPCs.

The degree to which the kingdom restricts the right of freedom of religion other than Sunni Islam is unique and extreme even by the standards of other violators. In March 2014, Saudi Arabia passed a new law which effectively defines atheism as an act of terrorism.

State and religion are not separated and the public practice of any other religion than Islam is illegal and even private worship is severely restricted. Mosques are the only public places of worship and the construction of non-Muslim places of worship is outlawed. Non-citizens are required to carry identity cards, which classify them into “Muslims” and “non-Muslims” and non-citizens applying for naturalisation must convert to Islam prior to the procedure.

The Committee for the Promotion of Virtue and the Prevention of Vice (CPVPV), often referred to as the “religious police” or “morality police” in international media, is a semiautonomous agency, which observes social behaviour and enforces a morality codex in coordination with Saudi law enforcement based on the country’s interpretation of Sunni Islam. It reports directly to the King and is not subject to judicial review.

The CPVPN monitors, inter alia, gender segregation in public and private, the consumption or selling of alcohol, witchcraft and sorcery, blasphemy, adultery, homosexuality, gambling, pornography and the practicing and displaying of non-Muslim faiths. As of 2011, the agency had 4,389 full-time mutawwa’een (CPVPV field officers), which operate all across the country. They do not wear uniforms, but are required to carry identification cards and their ruling is only legally binding in coordination with Saudi law enforcement.

Government policy as it at present stands does not interfere with private worship. However, the CPVPN often acts in direct contradiction to this understanding. In February 2013, the CPVNP arrested more than 50 Ethiopian Christians for seeking to convert Muslims to Christianity. All of them were deported or imprisoned.

Strict laws are in place to ensure that the state religion is not criticised, abandoned, or otherwise insulted. Under the Shari’a, blasphemy and apostasy are considered hudud offences (literal meaning “restriction”). This means that such crimes carry predefined punishments under Islamic law, without an option or discretion for judges to impose a greater or lesser sentence.

Blasphemy is largely considered a form of apostasy, which carries with it sentences up to the death penalty. Whilst the death penalty has not been enforced for apostasy or blasphemy since 1992, reports surfaced in February 2015 of a young Saudi man sentenced to death for apostasy. He stands accused of tearing pages from the Qur’an on a social networking site

A prime example of this practice is the case of Raif Badawi, a blogger famed for setting up the website “Free Saudi Liberals”. In 2012, he was arrested by Saudi authorities for insulting Islam through electronic media. Badawi was tried and in 2013, he was sentenced to 600 lashes. However, in May 2014, after appeals from prosecutors on the grounds that his sentence was too lenient, Badawi’s sentence was increased to 1000 lashes and a fine of 1 million Riyals (£175,000, €242,000). Badawi’s first 50 lashes were administered on 9th January 2015.

According to authorities, the CPVPN charged more than 100 people with “sorcery” and “witchcraft,” and arrested 215 “magicians” in 2013. Those accused of such crimes also face the death penalty, which is generally enforced. Recent cases include that of Amina bint Abdel Halim Nassar, who was executed in December 2011 for “witchcraft” and Muree bin Ali bin Issa al-Asiri, who was executed in June 2012 for “witchcraft and sorcery”.

As well as laws against blasphemy and apostasy, there are also laws in place to punish those who evangelise for other religions. In 2012, two men, one Saudi and one Lebanese, were arrested for bring about the “forced conversion” of a young Saudi woman. It is alleged the two men encouraged her to read Christian texts and take part in Christian religious discussions online, converting her to Christianity and illegally fleeing for Lebanon. Despite these accusations, the woman, known in Saudi as “the al-Khobar girl”, identifying herself as “Maryam” appeared on YouTube explaining she converted of her own free will and had found peace in her new religion. The two were found guilty of forcible conversion and forging travel permits and the Lebanese man was sentence to six years in prison and 300 lashes, whilst the Saudi was given two years and 200 lashes.

Also in 2012, the Saudi government detained two men, Sultan Hamid Marzooq al-Enezi and Saud Falih Awad al-Enezi, allegedly for becoming members of the Ahmadi community. Their whereabouts are unknown and they face the death penalty. Ahmadis are forbidden from entering Mecca and unable to perform their mandatory hajj pilgrimage. Many hide their faith to avoid discrimination, intimidation or worse.

Christians and Jews face open discrimination as well, particularly within the educational sector and print and broadcast media. Textbooks contain inflammatory anti-Semitic rhetoric, Qur’anic passages likening Jews and Christians to apes and swine and call for apostates from Islam to be killed. Saudi Arabia follows the lead of many Muslim nations within the region by smearing the conflict with Israel as a Jewish issue.

Religious freedom, including the right not to hold religious beliefs, is a basic human right that should exist everywhere in the world, whatever the predominant faith or belief in a given region and is integral to the establishment of a just and inclusive society. Saudi Arabia is an affront to anyone who has regard for basic human rights and our silence in the face of such violations is a ghastly disgrace.