Home / Middle East and North Africa / Is an aversion to ‘boots on the ground’ limiting U.S. options in Syria? 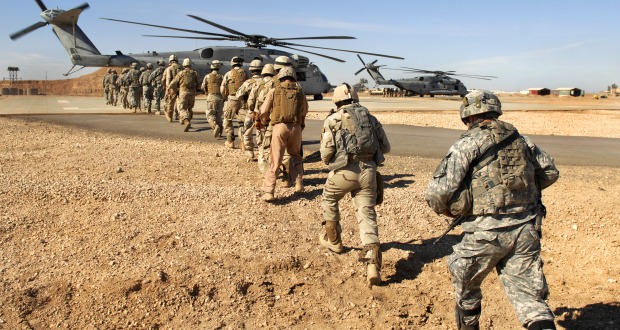 Read any proposed strategy on how the United States could defeat the Islamic State (IS) group and “stabilize” Syria and you will more likely than not find a solution which takes into account the lack of public support for any situation which requires the deployment of “boots on the ground”. After over a decade embroiled in conflicts in both Afghanistan and Iraq it is become commonplace to readily acknowledge the salient fact that Americans presently don’t have the stomach for another deployment of troops into another conflict zone. Frederick Kagan, who was one of those who strongly influenced the intellectual development of what became the troop surge in Iraq back in 2007, however has written a paper, along with Kimberly Kagan and Jessica D. Lewis, proposing a strategy which would involve a limited deployments on the ground in Syria and Iraq of ‘quick reaction forces’ which would decisively support U.S.-allied fighters against both IS and the regime of President Bashar al-Assad in Syria. [1]

The U.S. has been clear that it will not coordinate its operations against IS in Syria with the Assad regime. And most proponents of various strategies to address the Syrian situation stipulate that Assad must go. He isn’t after all a highly imperfect force for stability, his actions in the last three-years have proven from the start to have very destructive and destabilizing effects. His pounding to rubble of Syria’s cities has caused a giant refugee crisis in the region and burdened neighbouring Lebanon, Jordan, Iraq and Turkey. [2]

The Brookings Institute Kenneth Pollack has devised a different strategy. He estimates his solution will be cheaper overall when contrasted with past campaigns in Afghanistan and Iraq and will not require any deployment of U.S. forces on the ground in Syria. That solution is the training of a new Syrian army outside of Syria. One which when ready will fight as a conventional army and with decisive U.S. assistance defeat the Syrian military, topple the Syrian regime and also uproot and combat groups like IS. He writes about how the training program he envisions will root out any fanatics attempting to infiltrate it over time, by its design, and how that new Syrian army will in time be able to re-enter Syria and take control of the country (probably from somewhere like Jordan where, as he points out, the U.S. already has advisors training local allied military forces), likely with U.S. assistance and coordination along the way. [3]

Taking just these two proposed strategies into account one wonders if widespread aversion to even a limited ground campaign involving U.S. forces is leading proponents of possible solutions to discount that option altogether. While one would certainly never advocate putting a single soldier in harms way unless one was quite certain that the risk was worth the predictable outcome, one does nevertheless wonder if that would be in the case of Syria.

I think in retrospect any policy advisor or analyst would tell you that one of the biggest blunders made during the Iraq War was the complete disbandment of the Iraqi Army. Which proved to have colossal repercussions since it essentially forced out of work tens-of-thousands of military professionals from the old army. Men who, we shouldn’t forget, weren’t necessarily hardened ideologues but were just getting by as one did during the days of the old order of the Saddam Hussein regime. One wonders in Syria if it would be necessary to build a new Syrian army from scratch from outside the country or if the current Syrian Army could simply be given a new command structure. [4]

Most of the strategies for the U.S. campaign in Syria advocate eventually toppling the Assad regime and outline and put forward plans of action for the United States to follow in Syria which invariably include that very eventuality. If this is indeed going to be the strategy of the United States in the long-run why not also consider temporarily deploying forces on the ground if they would be instrumental importance to reaching certain tactical goals (not unlike what the aforementioned Kagan proposes)?

Contingency plans are supposed to take into account all possibilities and all available options. They are also supposed to present feasible options available under a variety of scenarios, both actual and hypothetical. I’m sure by now there have been many devised for Syria that we won’t know about until many years from now, if ever. One wonders if there is a feasible solution that would involve a limited deployment of U.S. ground troops. A series of operations which would decisively decapitate the regime (something which the U.S. would bound to need at least some ground incursions for) and enable an army along the lines Pollack described to take control of the country and over time bring into its ranks former employees of the present army in Syria and the police force who are not, as was the case in Iraq, for the most part hardened party or regime loyalists.

All of this will involve deciding how the new government of Syria will be formed. If it will, for instance, be a Syria whereby the constraints on the government which the Baath Party have had in place for decades now are simply lifted and some form of parliamentary democracy is established in its place, or if a military interim authority will be established which will be run by those forces the U.S. will have trained in exile and backed in their fight to take control of the country. These are all questions of fundamental importance that will have to be discussed and examined with thorough and diligent care and attention if any additional action is to be taken by the U.S. in Syria in the near future.

But whereby the military end of things is concerned it may turn out to be the case that a limited and decisive deployment of U.S. ground forces (probably special forces more in line with what Kagan proposes) may prove to be of immense tactical significance. U.S. officials have essentially stated that the Syrian forces it will be training to fight IS there will not be sufficiently trained (the planned training program is to last about 8-weeks and will likely be quite basic, furthermore the U.S. presently estimates it will train at most 5,000 such troops a year) or armed to the extent that they will even be able to retake IS-held towns without the assistance of U.S. combat troops. Something which the Obama administration has been adamant in its refusal to contemplate doing given the aforementioned lack of public support for it. [5]

Maybe it’s time to at least consider it an option, a last resort if you will, since even limited ad hoc uses of such forces could potentially make a whole world of difference in favour of U.S. aims and goals in that war-ravaged country.

2014-11-05
Guest Contributor
Previous: The Graveyard of ‘Fortress Europe’: Migration crisis in the Mediterranean one year after Lampedusa
Next: In Search of the Lost Balance: The Role of External Involvement in the Ukrainian Crisis