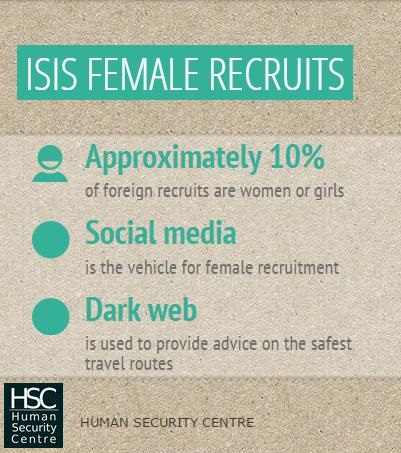 Around 10 percent of foreigners who have traveled from abroad to join the Islamic State (IS) are women and girls, according to a new report that sheds light on the terror group’s increased efforts to recruit women into its ranks.

IS (also known as ISIL or ISIS) has launched a “considerable recruitment push” focused on women and girls in recent months, according to a comprehensive new report issued Monday by the London-based Human Security Centre (HSC).

Julie Lenarz, the executive director of HSC, said, “Foreign recruitment is a serious problem which requires careful evaluation and prevention mechanisms. It is something that is perceived as a man’s trade, when in fact an increasing number of female recruits make their way to Syria. They join ISIS’ al-Khansaa brigade (all female shari’a police), support their husbands fighting for ISIS or go to Syria to marry a jihadi. The bottom line is that radicalised women and girls pose no lesser a threat because of their gender.”

“The continuous news stream of women making the journey to the Turkey-Syria border demonstrates that it is not only Turkey’s issue, but an international need to strengthen the counter narrative and coordinated intelligence targeting women and girls,” said Emily Daglish, a researcher at HSC.