The Effectiveness of Australia’s Anti-Human Trafficking Law and Policy

Australia is a destination country for trafficked victims, particularly women from Southeast Asia, who are coerced into moving to Australia under the belief they will obtain better working conditions upon arrival. However, once in the country, these women are often forced into modern slavery in the sex industry to repay traffickers’ exaggerated fees.

It is important to understand the context of Australia’s position regarding these activities. First, Australia is obliged under International Law to proactively protect victims (including when they are non-citizens) from the human rights abuses associated with trafficking. Human trafficking is a breach of victims’ right to liberty and security of person as a result of the conditions of forced labour and modern slavery that accompany trafficking. As a result of the physical and mental abuse most victims suffer, trafficking also breaches the right to the enjoyment of the highest attainable standard of physical and mental health under the International Covenant on Economic, Social and Cultural Rights and freedom from torture and cruel, inhuman or degrading treatment under the International Covenant on Civil and Political Rights. Second, Australia is also obliged to prevent human trafficking from occurring on the basis of being a signatory to the Convention for the Suppression of the Traffic in Persons and of the Exploitation of the Prostitution of Others.

Australia has introduced policy and law to correspond to its two international law obligations. The Australian anti-trafficking model is underpinned by the criminalisation of trafficking, which is designed to deter traffickers from committing the offence and correspondingly protect victims. It is a criminal offence to engage in the slave trade or to cause a person to enter or remain in forced labour.

Australia has also engaged at an international level to prevent trafficking out of victims’ home countries. Australia has engaged in multilateral discussions on trafficking in the ASEAN-Australia Counter Trafficking Program 2018-2028, and co-chaired the Bali Process on People Smuggling, Trafficking in Persons and Related Transnational Crime. This part of the Australian framework is a commendable grassroots approach at addressing the causes of trafficking – that is, extreme poverty in Southeast Asia and the allure of a better life in Australia – and attempting to prevent victims from being coerced from their home country in the first place.

The current anti-trafficking framework does not entirely adhere to Australia’s obligation to protect victims. The National Action Plan to Combat Modern Slavery 2020-25 lists ‘support and protect’ as one of its five ‘national strategic priorities’ and has elements of victim protection through rolling back mandatory detention for suspected victims, and by implementing bridging F visas to allow victims to lawfully reside in Australia. Limited victim protections are also contained in law – under the Crimes Act 1914, trafficked victims can give evidence at trial by video-link or recording, have their contact with the defendant or members of the public limited, and have a support person with them.

Although Australia’s international cooperation is commendable in preventing trafficking, the continual occurrence of trafficking indicates that there are gaps in Australia’s framework. Whilst the National Action Plan attempts to shift policy away from a purely criminal response, the legal and political framework dealing with human trafficking in Australia continues to be foregrounded in the criminalisation of trafficking. This represents a weakness in the Australian response for the following reasons.

First, as trafficking is extremely lucrative, there is not enough disincentive in the current framework to deter traffickers from engaging with the industry. An estimated 1 million AUD goes in total to Australian traffickers each week, which represents the enormous gains associated with trafficking. Although convicted traffickers face imprisonment, this deterrence model requires successful prosecution of traffickers. This is relatively uncommon, as victims usually come to Australia willingly and it is difficult to prove they are not consensually prostituting themselves. Resultingly, traffickers are rarely punished and there is consequently little disincentive for them to engage in the extremely lucrative trafficking business.

Second, the framework’s prioritisation of punishing offenders moves the emphasis away from victim protection, which is equally important for Australia in adhering to its international obligations. The criminalisation of trafficking is supposed to act as both prevention and protection, but a consequence of its pre-eminence is that victim wellbeing is incidental to punishing the alleged criminal. As well as being a neglect of Australia’s international obligation to protect victims’ rights, taking the emphasis away from victim protection is detrimental to an attempt to end trafficking. Victim support needs to be a priority for the full realisation of criminal justice. For prosecutions of traffickers to be successful, victim testimony is vital. Without adequate funding and resources directed at victim support, victims are usually misidentified or unidentified, and even when correctly identified, they are often too traumatised and fearful of their traffickers or of being deported to present evidence. The result is that prosecutions of traffickers are difficult and subsequently infrequent, and the provisions criminalising trafficking lose their disincentive effect.

To increase victim support, the legal framework should allow for victims to seek compensation and civil remedies. Not only does this respect victims’ right to dignity by recognising the human rights abuses perpetrated against them, but it also gives them a source of revenue to begin building a life away from the rights abuses in the sex industry.

Victim-help services should be made accessible to victims by promoting them in places victims frequent (such as Red-Light Districts) and in home-country languages. Once victims come forward, there need to be devoted support services such as social housing. As traffickers generally provide accommodation for their victims, victims must be given accommodation away from their traffickers to escape. Further resources must also go into training and education of victims – both of a trade and of the English language – so they can find employment away from the sex-industry in Australia. By creating pathways for victims to escape the exploitation of traffickers, the framework would be more effective in protecting victims from rights abuses.

Rather than Australia’s current model of granting some trafficked victims short-term visas, the Australian model needs to allow for victims to be eligible for long-term, permanent visas. Not only is this a human-rights based decision to protect victims from any harm that might come to them upon returning to their home country, but it is also important for ending human trafficking. As women are often less willing to testify in court out of fear they will be deported, the prospect of being allowed to remain in Australia permanently means that they are more likely to come forward and give the testimony that is crucial in securing a prosecution – a vital aspect of the deterrence model. The Italian model could be implemented. In Italy, trafficking victims are required to assist with police investigation, and are then automatically offered a permanent residency permit with work and education rights. Not only does this protect individual victims from re-trafficking, but it also assists in the deterrence model by increasing the success of prosecutions.

These recommendations would help bring Australia in line with its international obligations to prevent trafficking and protect victims. However, addressing the issues in Australia’s framework will not be sufficient to eradicate trafficking entirely. Trafficking continues to occur as a result of entrenched poverty in developing countries, as women in extreme poverty are especially susceptible to traffickers’ promises of a better life in Australia. Australia must implement the aforementioned recommendations, but human trafficking is a result of deep financial deprivation and its eradication will require a multilateral effort that eradicates international poverty.

2021-02-15
Jessica Honan
Previous: A long way from home: the unexpected smart power role of Japan Self-Defence Force Base Djibouti
Next: The Control of Water as a Driver of Instability 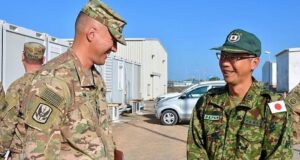 A long way from home: the unexpected smart power role of Japan Self-Defence Force Base Djibouti