Home / Global Governance and Human Rights / Genocide, Intervention and Defending our Indefensible Institutions
There’s an odd, and slightly twisted argument doing the rounds at the moment. It goes: it’s perfectly ok to let genocide happen, yes, even on your doorstep. Let’s just restrict the discussion to that. Not regime change, not geopolitical advantage, simply the prevention of genocide. It’s ok.

There’s an odd, and slightly twisted argument doing the rounds at the moment. It goes: it’s perfectly ok to let genocide happen, yes, even on your doorstep. Let’s just restrict the discussion to that. Not regime change, not geopolitical advantage, simply the prevention of genocide. It’s ok. And, don’t worry, you can always find a bunch of other countries – the “complicated and ethically dubious” position of France in recent years being a prime example, or Spain – also happy to stand back, even for years, looking on (Western Sahara, anyone? Bosnia? And, let’s face it, none of us were exactly covered in glory over the Kurds).

Why? Because, according to this argument, it’s much more important that we work within the out-of-date and dysfunctional framework of the (UN/EU/NATO, delete as applicable) which was designed 50-odd years ago and which we know that, often as not, doesn’t solve the problem, or certainly not in a remotely adequate timescale. Rwanda and Bosnia, ultimately, were good. Because we played by the rules. That is what matters. Sierra Leone and Kosovo were bad. Never mind what the population of those countries think about whether we succeeded or not. This argument says these campaigns failed, because we didn’t play by the rules.

Now, it is interesting to note that, at the same time as many of us argue the prime importance of the Alternative Vote in our own country – because it is “more representative” – we can be comfortable to defend a system which takes no account whatsoever of the number of people represented (for example, the UN, with its brilliant one country, one vote system giving China the same power as, say, Swaziland). Oh, and the Security Council, where in order to win a vote, big countries have to come up with favours that they can do for small countries, in order to buy their vote. That’s perfectly consistent with fair representation, isn’t it? But we defend these often-farcical institutions because “they’re all we’ve got”. Well, that may be so, but surely we also have the right, when circumstances dictate, to refuse to live by their Kafkaesque logic. And this is not news: in seats of government across the world – certainly in big countries – it is an open secret that the UN is practically useless as regards international security, that it is not fit for purpose. Sunder Katwala makes an excellent case for its reform here, and he is right. But there is a “meantime”.

Now, it is also essential, goes the argument, that countries cannot, absolutely cannot, take action outside these frameworks. Action outside these frameworks is “illegal”. What’s illegal? It’s what the rules say it is. You cannot take action outside the rules because – and here the twisted argument plays its trump card – because, you know what happens if you do? We end up with Iraq, and look how that turned out. So, I decree that you must jump through these hoops. And these. And here are a couple more we just made up on the spur of the moment, to please a couple of rotating members of the UN Security Council. And as we continue to have this sublime debate, out in the real world, somewhere, a dictator turns his guns on his own people.

But this is not the end of the discussion. Each case is a world apart, not to be judged against another conflict or intervention. It is clear that there are strong views on either side of the Iraq debate but, listen, we have a choice: move on; or let this thorn in our collective side continue to colour our view of any kind of intervention for the next few decades. (And that same debate, frankly, is not even applicable in this specific case – Iraq was about perceived threats to global and regional stability, not genocide.) Whatever the rights and wrongs of Iraq, genocide is morally repugnant and we are obliged to act if at all possible. And yes, we should always go through our institutions as much as we can. Build consensus. Attempt diplomacy. Sanctions, if they can be made to work. All these things are right and good. But we also have to recognise there may be a time when we need to act outside them, or at least have a realistic threat which underpins them. We won’t always need to use force, thank God. But the reality is that dictators will not usually move unless there is at least a threat of force which is real and credible. Perhaps to some this is a statement of the obvious, but to others it is not.

If this sounds angry, well, yes it is. It is right to be ashamed that our Tory-led government under Cameron and Hague appears to be, like Major and Rifkind before them, yet again suffering from an outbreak of paralysed fence-sitting. It is right to be fed up with the unholy alliance of rightist isolationists and leftist apologists conspiring to let people be murdered by their deranged leaders. And we should be proud that Shadow Defence Secretary Jim Murphy has come out on the side of the angels for an interventionist policy.

Our great movement has always been about internationalism. It has not, apart from very brief wilderness periods, been about unilateralism, pacifism or similar fellow-travelling. At the core of our historical defence policy lie Bevin and Gaitskell, not Lansbury or Benn. It is about standing up and being counted; not letting evil prevail, as Edmund Burke observed, because we did nothing.

So: we have the option. We can unite behind a good policy. A truly distinctive and Labour policy which chimes with our core beliefs and sets us apart from the Tories. And a policy which, if carried out well, in power at least, can provide real international leadership and save lives. It doesn’t have to be the policy of Tony Blair, if you’re opposed to that: it can be whatever flavour we agree it to be. We can all learn lessons. But it needs to have the ability and the mandate to act on genocide.

Or, alternatively, we can follow the circular do-nothing argument: as we enter yet another phase of acute instability, this time in North Africa, let’s bear in mind how important it is to tick every single box within this dysfunctional framework. I’m sure that, as the inevitable fallout happens and madmen slaughter civilians, the world will thank us for having played by the rules.

Rob Marchant is contactable at: rob.marchant@hscentre.org 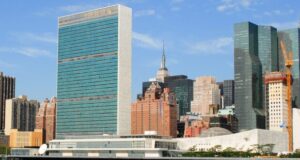