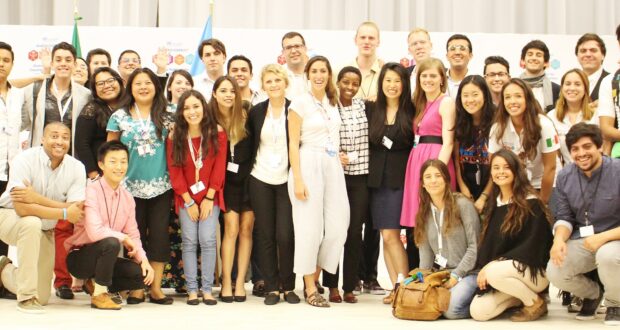 In 2019, according to the United Nations estimates of the world’s population, there are 1.2 billion people aged 15 to 24 years globally, or around one in every six persons worldwide. The number of young people in the world is projected to grow by 7 percent to 1.3 billion by 2030, the target date for achieving the Sustainable Development Goals (SDGs), which generates a global platform for young people to be involved in violence prevention and sustainable peace, based on respect for human rights.

The definition of “youth” may be evolving in response to demographic, financial, economic, and socio-cultural changes. However, there is no one definition of youth, but many. Different UN entities, instruments, and regional organizations have different definitions of youth. For example:

The UN Secretariat uses the terms youth and young people interchangeably to mean age 15-24, as defined for the first time by the Secretary-General in his report to the General Assembly on International Youth Day in 1981, with the understanding that member states and other entities use different definitions.

Despite being an important part of our societies with a great potential for fostering peace, youth voices often remain unheard, especially in multilateral settings. Peace and security issues were dealt with, thought through, and discussed only among senior experts until recently. But in more contemporary settings, we can observe a real change not only in the link between youth, peace, and security and in the perception of the role of youth in these issues, but also in the role we attribute to them and in their engagement around the world.

The Recognition of the Youth Role

The OSCE was one of the first institutions committed to promoting the role and the inclusion of youth in its peace and security agenda, a stance which dates to its founding document, the 1975 Helsinki Final Act, and has been strengthened through many subsequent OSCE decisions.

In the 1975 Helsinki Final Act, OSCE States committed to further the development of contacts and exchanges among young people to foster mutual understanding and strengthen friendly relations and confidence among peoples. Since then, several statements, resolutions, and documents have served to ensure the growing role of youth in the promotion of peace and security in our society.

In 1998, the World Conference of Ministers responsible for Youth recommended declaring 12 August International Youth Day, under UN Resolution 54/120. A year later, the recommendation was endorsed by the United Nations General Assembly, which was part of the growing recognition of the role of young people as agents of change and advocated for the inclusion of young professionals in development debates, including discussions on peace, security, and our common future in a globalized world.

While the 2014 Basel Ministerial Council Declaration on Youth reaffirmed the contribution of youth in the implementation of OSCE commitments in all three dimensions of security, the 2015 Belgrade Ministerial Council Declaration on Youth and Security stressed the importance of promoting the implementation of the OSCE commitments on youth.

The 2018 Milan Ministerial Council Declaration on the Role of Youth in Contributing to Peace and Security Efforts recognized that youth are an important part of society and highlighted the role that youth can play in supporting participating States in the implementation of commitments in all three dimensions.

The adoption of Security Council Resolution 2250 in 2015 was a huge part of the recognition that young people play an important and positive role in the maintenance and promotion of international peace and security. International Youth Day 2017 is dedicated to celebrating young people’s contributions to conflict prevention and transformation as well as inclusion, social justice, and sustainable peace.

In 2016, the Security Council adopts Resolution 2282 on the Review of United Nations Peacebuilding Architecture, recognizing thus that the scale and challenges of sustaining peace require partnerships between stakeholders, including youth organizations. It also reaffirms the important role youth can play in deterring and resolving conflicts and that they are key constituents in ensuring the success of both peacekeeping and peacebuilding efforts.

That being said, the role of youth is also essential to the realization of the 2030 Agenda for Sustainable Development Goals, particularly Goals 16 and 17. The former aims to promote peaceful and inclusive societies for sustainable development, ensure access to justice for all and build effective, accountable, and inclusive institutions at all levels. The second aims to strengthen the means of implementation and to revitalize the global partnership for sustainable development.

But to what extent do young people have the capacities and the skills to become actors in tomorrow’s society, helping to find solutions to contemporary problems, to create a lasting and positive impact?

Youth’s Commitment in Peace and Security

According to the 2015 UNOY Peacebuilders report, youth offer many key attributes which can positively and effectively contribute to peace and security:

According to the 2016 Progress Study on Youth, Peace, and Security, and in contrast with senior experts who are generally engaged in regional, national, or international discussions and processes, youth work at different levels of society – peer to peer, family, community, national, regional, international -, while collaborating with various partners as local and national governments, community leaders, media, cultural organizations, justice, police, other peacebuilding organizations.

Youth are bridge-builders between different topics as development, human rights, humanitarian, peace and security, and experts. Finally, they respond to different types of violence: violent extremism, political conflict, organized criminal violence, sexual and gender-based violence, often differently than experts given that young people are the most affected by these phenomena. Thus, youth are at the interface of state-society relations.

The United Nations and the OSCE both take youth’s participation and views into account in decision-making processes, from negotiation and prevention of violence to peace agreements and support young people in preventing violence and in promoting a culture of tolerance and intercultural dialogue. Young people are also engaged during and after conflict when developing peacebuilding strategies, along with community actors and United Nations bodies.

All these developments and initiatives that aim to include the voice of youths and increase the engagement of young people in the field of peace and security demonstrate how, today, young people are becoming actors in society, willing and able to contribute to building a more sustainable and peaceful world.

The voice of young people is now considered but only in security and peace matters related to a country or region in conflict. The inclusion of youth in these fields is becoming more and more crucial for the United Nations, the OSCE, and other regional institutions, to have a positive impact on society, build peace and ensure human security.

Thus, in a context where youth constitute the largest part of the population, where scandals about police practices are breaking out and reforms are undertaken, where the fight against terrorism and radicalization as examples is becoming more and more the responsibility of cities also, youth could become a part of the solution to these challenges. So, why not considering how youth can participate and be included in public security issues and reforms, as a civic engagement for example?

Image: Member of the United Nations Major Group for Children and Youth (UNMGCY) at the Global Platform for Risk and Disaster Reduction 2017 (Source: James Andrews via CC BY-SA 4.0)

2021-06-29
Ataa Dabour
Previous: Sanctions and expulsions: how the West is taking a firmer line with Russia in 2021
Next: Regional dynamics and consequences related to political instability in Chad