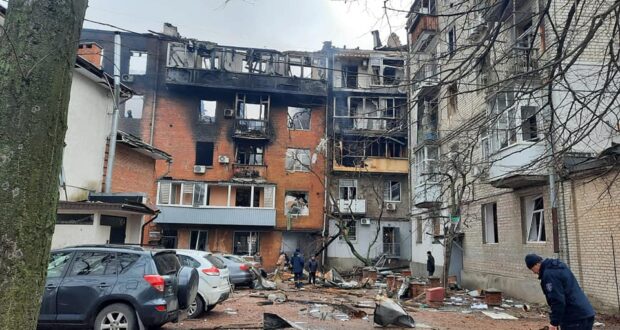 In 2022, NGO ‘Action on Armed Violence’ (AOAV) released a summary report on the damage explosive weapons caused to civilian life and infrastructure between 2012-2022. During this period, 238,892 civilians were killed or injured in populated areas. These civilian deaths account for 91% of the total death toll through the deployment of explosives in populated areas, meaning the attacks responsible only killed combatants 9% of the time.

Residential areas saw the largest hit: this includes towns, cities and settlements. A total of 4,168 deployments of explosive weaponry were made in these areas during the decade, resulting in 36,726 civilian deaths and injuries. The frequency of these deployments required the creation of a ‘multiple urban’ category as many bombardments were launched across large areas, targeting multiple urban sites all at once. In these areas, an additional 2,125 explosive deployments were made, resulting in a further 41,465 civilians or deaths. Religious buildings had the highest rate of civilian to combatant victim rates with 95% of deaths or injuries being civilian. Across 572 incidents, a total of 18,416 deaths or injuries occurred, of which 17,574 were civilian.

Improvised explosive devices (IEDs) were responsible for 171,223 deaths, a staggering 52% of all civilian deaths or injuries in the last decade. IEDs were responsible for at least one death in over 100 different countries or territories, typically due to their ability to be discreetly deployed. 7,046 incidents were reported in populated areas, 59% of all recorded attacks in the last decade.

In 2022, the Explosive Weapons in Populated Areas Conference (EWIPA) was hosted in Dublin by the Department of Foreign Affairs (DFA) for the Republic of Ireland. The conference brought 50 state delegates together to sign a new political declaration aimed at strengthening civilian protections against the deployment of explosive weapons in populated areas. Both states and international organizations registered for the conference, assigning one delegate each to partake in the presentations, discussions and endorsements of the new declaration. A new declaration titled ‘Political Declaration on Strengthening the Protection of Civilians from the Humanitarian Consequences arising from the use of Explosive Weapons in Populated Areas’ has been drafted and subsequently endorsed by 82 states as a milestone document in the expansion of civilian protection during conflicts.  The declaration reaffirms the humanitarian ruleset found in the Geneva Conventions (I-IV), Additional Protocols (I–II) and the ICRC Rules and calls upon the parties to ensure they have procedural standards for the deployment of explosives in populated areas, an action that often results in the direct/indirect loss of civilian life.

The declaration discusses critical issues in the deployment of explosives in populated areas. First, it addresses the general use of explosives in populated areas, highlighting the civilian devastation associated with poorly planned or ignorant deployment. This assessment considers a number of factors, including the explosive power of the deployed weapon, the deployed weapon’s level of accuracy, and the number of munitions deployed. Second, a distinction between the indirect/direct effects of explosives is made. Blasts and fragmentation effects as well as debris are considered indirect attacks on civilians as they are known to cause lifelong injuries and even death, especially among children. Direct effects occur from the deployment of explosives without due consideration to the nature of a given structure or area, such as the shelling of a block of civilian flats. Third, indirect humanitarian consequences are highlighted as a critical concern. This includes damage to vital infrastructures such as water supply, electrical grids, food banks, hospitals and sanitation networks. These are included as an indirect effect of explosive weapon deployment yet can have dire consequences as these kinds of attacks severely limit the transport of aid, access to food and water as well as the mitigation of immediate access to medicine and healthcare. Additionally, the consequences of these attacks are not limited to the area attacked but are often interconnected with other areas, causing a damaging collateral effect on the surrounding areas. Fourth, the psychological and psychosocial harm that occurs in proximity to these attacks is reaffirmed as a direct contributing factor to internal displacement, societal morale and damaged progress towards Sustainable Development Goals. Finally, the declaration discusses how many armed forces have military manuals or internal rulesets that dictate how they will oblige with their international obligations. These military manuals are an essential component that allows for state forces to have a strong grasp of general conflict rules, including the deployment of weaponry that may cause indirect/direct harm to civilians.

These key observations urge parties to the agreement to facilitate the mitigation of civilian harm primarily through internal regulation, rulemaking and the training of state forces. One prime example of this is the already established Joint Service Manual of the Law of Armed Conflict (JSP 383).

The Ministry of Defence (MoD) of the UK produces ‘Joint Service Publications’ that outline rules and regulations on a variety of issues. These issues range from environmental safety, pensions, education and legal issues. JSP 383 is a document that sets out the rules aimed at the regulation of armed conflict.  that already satisfies the requirements of the new declaration. Section D of the document relates to precautions in attack and details exactly how the issues highlighted in the declaration are to be handled.

Everything feasible must be done to ensure that any proposed target is both not a protected site (such as civilian buildings, churches, hospitals etc.) and is a military objective. For clarification, military objectives are objects that by their nature, location or purpose would make an effective contribution to military action and whose partial or total destruction/capture and neutralisation would offer a definitive military advantage. The document defines 5 factors for target identification in both aerial and ground attacks. The commander in charge of target selection must have due caution towards some or all of these requirements:

Target lists, such as those gathered through intelligence operations are to be constantly reviewed in light of fresh information. For example, a camp identified as a military objective one day may be demilitarized and altered to be a safe zone for civilians the day after, therefore attacking it after demilitarization would constitute a war crime.

3. Means and methods of attack

Due warning is to always be given when there is a risk, even if insignificant, that civilians or civilian objects may be affected by an attack. This warning must be effective and given long in advance. For example, if mortar strikes are to be carried out on a town with both a civilian and terrorist non-state armed group population, yet only targets buildings that are confirmed to be solely occupied by legitimate targets, the civilian population must be warned to evacuate in case of indirect harm from the explosive radius.

IACs can only be conducted between ‘High Contracting Parties’ to the Geneva Conventions, this means states as non-state parties cannot legally enter into international treaties designed for state discretion only. However, NIACs are armed conflicts that are not of an international character (state vs state) but exist between a state and non-state entity, such as rebel forces, non-state armed groups or terrorist organisations. This means that while non-state entities are not ‘High Contracting Parties’ to the Geneva Conventions, they are still legally bound to abide by international humanitarian law (IHL). Additionally, non-state entities are required to create ‘special agreements’ that allow them to conduct hostilities in line with IHL, this includes the establishment of humanitarian corridors, respect for the principle of distinction and reluctance to use restricted weaponry to name a few.

Parties to the new declaration commit to:

‘Implement, and, where necessary, review, develop or improve national policy and practice with regard to the protection of civilians during armed conflict involving the use of explosive weapons in populated areas.’

Additionally, these parties must:

‘Facilitate the dissemination and understanding of International Humanitarian Law and promote its respect and implementation by all parties to armed conflict, including by non-State armed groups.’

The issue at hand is that non-state armed groups are not parties to the declaration, their only relevant mentions in the document relate to state parties being required to impart an understanding of the declaration provisions upon these non-state armed groups, there is no concrete mention of them being bound by any of the new provisions. Because of this, armed groups may argue they can still operate under the general rules of IHL regarding the use of explosives in populated areas. This suggests they still must ensure civilians are not harmed, but they are not necessarily obligated to create internal practices and policies or to educate members of their forces on IHL as strictly required by the new declaration, only ‘special agreements’ required by the Geneva Conventions.

The new declaration reaffirms the importance of military manuals and cooperation between the parties to a conflict. The additional urge for further internal regulation of conflict conduct is clearly beneficial regarding explosive weapons deployment, particularly due to the dangerously high civilian-to-combatant death rate. Additionally, the new declaration ties the deployment of explosive weaponry together with other humanitarian issues such as internal displacement, damage to vital infrastructure and mental harm, creating a solid basis for the drafting of more detailed internal regulations. However, the glaring issue of the application to the conduct of non-state actors remains murky. Without clarification in the form of explanatory notes to the new declaration, non-state actors may decide against implementing the new provisions due to potentially not being obliged to.

Image: Shelled residential buildings in Kharkiv Oblast, in the midst of the Russian invasion of Ukraine (Source: State Emergency Service of Ukraine via CC BY 4.0)

2023-01-09
Sam Biden
Previous: More than just a spectator? Japan’s involvement in the Ukraine crisis and implications for the Kuril Islands dispute
Next: Malawi – Forced Labour and Human Trafficking Continues to Supply Big Tobacco 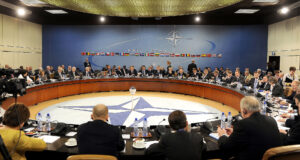