Since 2019, Iraq has been plagued by constant demonstrations and protests against corrupt governance. Dire public services, high levels of unemployment as well as overall instability have further contributed to the now serious unrest in the troubled State. In responding to these protests, many claim that the Iraqi government have disregarded not only human rights, but also civil and political rights such as freedom of expression & association.

As of May 2021, according to the Iraqi High Commission for Human Rights (IHCHR), a total of 600 people have been killed in protests as well as over 4,000 injured. Security forces and armed groups have used live gunfire & military-grade tear gas to try and dim the success of the protests – actions that are in direct violation of the right to freedom of expression & association.

Update on Accountability in Iraq

In reaction to the wave of civil unrest, the United Nations Assistance Mission for Iraq (UNAMI) was created and began an investigative and reporting process on continual developments. They have released many periodic reports on the ongoing situation, yet their most recent report has raised major concerns.

UNAMI noted between 1 October 2019 and 30 April 2020 that 487 protestors were killed during the course of demonstrations, with a further 7,715 injuries in the same reporting period. Additionally, between 1 October 2019 and 15 May 2021, UNAMI noted a further 48 incidents of attempted execution of protestors, activists and critics, resulting in a further 32 deaths and 21 injuries. These attacks have been linked to ‘unidentified armed elements’. Examples of tactics used include the deployment of lethal force, use of toxic chemicals for dispersion and physical assault with various weaponry (such as police batons & tasers).

When analysing the prior 2021 UNAMI report, they noted that accountability efforts on behalf of the Iraqi government have fallen short of the minimum acceptable. These poor efforts have continued into 2022.

Iraq is subject to both domestic judicial networks as well as those of an international character. The ‘Judicial Investigative Committee’ is the domestic judicial body for Iraq and is responsible for ensuring accountability in each governorate. Additionally, the High Judicial Council operates alongside this committee and has registered a total of 8,163 incidents of violence against protestors. In collaboration with local investigative courts, they have begun to identify and hold accountable those responsible for targeted killings and abductions, yet have only successfully completed two convictions for such offences.

Iraq is a signatory party to many important international treaties, specifically; the International Covenant on Civil and Political Rights (ICCPR), the Convention against Torture and Other Cruel, Inhuman or Degrading Treatment or Punishment (CAT) and the Convention for the Protection of All Persons from Enforced Disappearance (CED). The ICCPR protects freedom of expression & association while CAT and the CED focus far more on circumstances of a torturous nature. It must be noted that violence against protestors, delayed or exacerbated detention tactics, as well as the disproportionate use of force, can cause both a violation of freedom of expression & association as well as the right to be free from torture simultaneously.

In response to the very clear obligations Iraq is subject to, Iraq created a ‘Fact-finding Committee’ by order of the Prime Minister in October 2020. This committee operates mostly in private without public access to information relevant to their investigations or findings. This restricts the transparency of the whole operation, without any information relevant to the efficiency, plans to tackle corruption and initiatives to ensure that state forces that commit crimes are held accountable, UNAMI and the broader international community are kept entirely in the dark about whether Iraq is upholding their obligations. The small amount of information in the public eye points to horrifically handled criminal trials which included protestors being subjected to threats and intimidation during the course of the trial and outside the courtroom. Because of this violent attitude towards dissenters, very few viable claims from protestors have ever gone to trial.

Despite the closed doors of the Fact-Finding Committee, UNAMI has documented various kinds of successes and failures regarding criminal prosecution for both those involved in protests as well as those who harm those protestors.

In a letter to the High Judicial Council of Iraq in January 2022, UNAMI received some very basic information on the status of criminal prosecutions surrounding protests. 4 months later, the High Judicial Council claimed that over 664 protestor-related investigations were open (yet they did not specify in which context these are taking place), as well as 327 referrals to various courts, some of which are now underway in the trial phase, as well as 1,106 cases that have been marked as ‘closed’. The lack of specificity provided raises serious concerns over the legitimacy of the investigations and trials taking place. It could well be that the majority of these cases are not made in favour of the protestors such that their attackers are prosecuted but may indicate that many protestors are being prosecuted for their involvement in the ongoing protests.

A more accurate representation of ongoing trials can be made by looking at specific governorates themselves as opposed to relying entirely on the centralised Fact-Finding Committee.

The Basra Criminal Court (BCC) noted a series of convictions pursuant to Article 406 of the Criminal Code of Iraq. This criminal code allows for the execution of an individual if they have committed an unlawful killing in nine various circumstances.

In August 2021, two members of the Thar Allah armed group were successfully convicted for the murder of a protestor and for causing the injury of several other protestors in May 2020. The perpetrators were given life sentences as of December 2021. In November 2021, The BCC successfully convicted an individual for the murder of two journalists who were known to be reporting on the protests in January 2020, the individual responsible was handed the death sentence for his actions pursuant to Article 4 of the Anti-Terrorism Law. Another two men were convicted in the same month for causing the death of a 14-year-old juvenile protestor. One of the men convicted was dually accused of the attacks on the journalists in the prior conviction mentioned: he was handed the death sentence. Both men were allegedly part of a ‘death squad’, a group of mainly unidentified men who’ve been responsible for terrorizing and killing protestors since the outbreak.

The BCC noted how some investigators involved in the cases were the victims of violent reprisals. One member of the Basra Investigative Court on Terrorism Cases identified that the prior mentioned ‘death squad’ were involved in the killing of an intelligence officer assigned to investigate violations against protestors. Additionally, an IED was planted on a motorcycle in an attempt to kill another intelligence officer who had passed through the area just shortly prior.

The Maysan Criminal Court (MCC) has been similarly successful in its efforts to pursue those responsible for violence against protestors, yet not at the same scale as the BCC.

In September 2021, the MCC convicted a man pursuant to Article 406 for the murder of a protestor, he was sentenced to death. The accused was responsible for the abduction and death of an activist in March 2021. Abductions or enforced disappearances have become commonplace in the troubled governorate. The MCC has made poor strides in ensuring accountability for not just the victims of these crimes, but also closure for the families. The MMC summoned four family members in relation to an enforced disappearance case and instead of enquiring about the victim and offering redress for the family and victim, the MCC pursued defamation claims against the families made by the perpetrators. Although the defamation case was dismissed, the MCC’s focus on ensuring defamation cases are heard before enforced disappearance cases is an extremely troubling scenario.

From May 2021, four cases against members of the SSF were documented by UNAMI. Only one of those on trial remains in detention, the other three were successfully convicted for violence against protestors. On February 22 2022, opposing security forces successfully captured the Lieutenant Colonel of the Rapid Response Forces due to an arrest warrant on behalf of the Nasiriyah Investigative Court. The incident contained in the warrant related to the deaths of 25 individuals and injuries of 200 others perpetrated by the SSF in November 2019 as they opened live fire on a crowd of protestors.

In May 2021, the BCC convicted a member of the SWAT government force for the murder of a protestor during a demonstration in November 2020. On 1 December 2019, the Wasit Criminal Court (WCC) also convicted another member of the SWAT force, the individual was ranked as a Major in his unit. The perpetrator was guilty of murdering two protestors during a demonstration in October 2019. In May 2022, the Rusafa Criminal Court (RCC) convicted a further three members of government forces, belonging to the riot police responsible for the armed response to protests in Tahir Square in July 2020. All three members were handed life sentences pursuant to Article 406.

The Fact-Finding Committee, in spite of the small successes of the more transparent de-centralized governorates, continues to operate in almost complete secrecy. The only major information provided to UNAMI in the 4-month waiting time for a response to their letter was a few basic statistics. In comparison to the broader statistics, over 600 confirmed deaths and 4,000 injuries are mostly unchallenged and unsolved. The small victories of the governorate courts are not enough if the centralized committee fails to engage with the broader violations. Security forces have been consistently accused of these violations yet many of their convictions have come not from the centralized body, but from the smaller governorate courts. It appears that a strong reluctance operates at the heart of the Fact-Finding Committee, a notion that perhaps involves them defending their public servants in the SSF rather than ensuring accountability regardless of the perpetrators.

2022-07-27
Sam Biden
Previous: The Development of the Humanitarian Crisis in Yemen
Next: From Bad to Worse – How the UK’s Counterintuitive Rwanda Agreement Fails to Meet Britain’s International Obligations 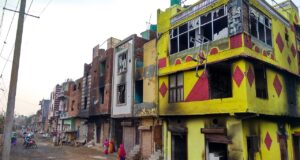 Muslims fear for their lives in India