Home / Europe / NATO’s Article 4: What it is and how it works 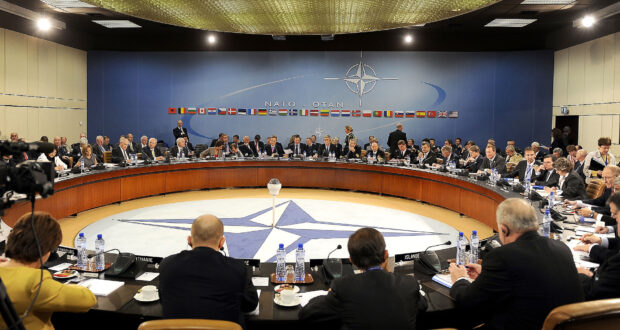 The war in Ukraine following Russia’s invasion on February 24, 2022, has at points threatened to draw in other countries. Belarus’ complicity in enabling Russia’s aggression from Ukraine’s north by providing support and acting as a staging area, has raised fears of an eventual offensive of its own, and the explosions damaging the Nord Stream pipelines in the Baltic Sea in September begged the question of a possible NATO response. However, it was a missile impacting in Polish territory on November 15 that prompted discussion of a potential triggering of NATO’s Articles 4 and 5.

This was particularly true while it remained unclear whether the missile, which landed in the Polish town of Przewodów, some 6.4km from the Ukrainian border, was Ukrainian or Russian. This occurred on a day in which Russia launched a large wave of missile attacks targeting Ukrainian cities, against which Ukrainian anti-air defenses were activated. NATO held emergency talks following the incident and Poland stated it considered implementing NATO’s Article 4 in response. At the same time, social and news media took to the internet to hypothesize a potential invocation of Article 5. Neither happened, nor were the emergency talks a result of Article 4. Following an investigation it was then revealed that the incident was not an intentional attack on Poland, as the missile in question, a Russian-made S-300 surface-to-air missile, was fired by Ukraine in defense against Moscow’s attacks and subsequently went astray.

In the North Atlantic Treaty, Article 5 essentially says that an attack against one member state is an attack against all. It is well known for being NATO’s collective defense clause. While this Article in itself is frequently misunderstood, as a military response is not necessarily mandated and Article 6 lays out the conditions under which Article 5 is valid, Article 4 is often missing when discussions concerning NATO responses occur.

In its entirety, Article 4 reads;

“The Parties will consult together whenever, in the opinion of any of them, the territorial integrity, political independence or security of any of the Parties is threatened.”

This can be understood to be a “preparatory phase” before a possible invocation of Article 5, in which consultations are held prior to determining how the alliance would jointly respond in Article 5, if at all, which requires members agree that an armed attack actually took place to begin with. Article 4 forces members to examine if a threat actually exists, and how best to counter it. The consultations themselves are held by the North Atlantic Council (NAC), NATO’s political decision-making body, and can occur at short notice, as all member states have representations at the alliance’s headquarters in Brussels. By forcing all alliance members to discuss a topic as a matter of priority, Article 4 promotes diplomacy and has the ability to prevent escalation that would draw NATO into a conflict.

Would Poland have felt threatened in November and invoked Article 4, it would have been the eighth time consultations would have been called for, and the second time Poland would have invoked this Article. It has been invoked five times by Türkiye and once by a group of alliance members following Russia’s 2022 invasion of Ukraine.

The first time Article 4 was invoked in NATO’s history, was on February 10, 2003, when Türkiye expressed concern of a spill-over onto its territory as a result of the then-conflict in neighboring Iraq. In response, NATO decided to launch Operation Display Deterrence, in which NATO elements deployed to Turkey for 65 days from February to March. American and Dutch anti-aircraft systems, early-warning aircraft, and over 1,000 personnel tested NATO’s ability to respond to potential threats to an alliance member.

The second invocation on June 22, 2012, followed the shooting down of a Turkish jet by Syria, which NATO strongly condemned. In a statement following consultations, then-Secretary General Anders Fogh Rasmussen indicated that Article 5 was not discussed and that he did not believe the ‘situation’ would escalate. Syrian President Bashar al-Assad also regretted the incident, saying he would not permit existing tensions between Syria and Türkiye to develop into active combat.

Türkiye invoked Article 4 for a third time on October 3 of that same year, after Syrian shelling killed five Turkish civilians. The alliance member responded to this incident in the border-town of Akcakale by striking “points in Syria determined by radar” with artillery of its own. In a statement following Article 4 consultations, Secretary General Rasmussen reiterated NATO’s will to defend the Turkish people and Turkish territory, revealing the intent for the defensive deployment of Patriot anti-air missile systems to Türkiye following the latter’s request.

Poland invoked Article 4 on March 3, 2014, following Russia’s aggression against neighboring Ukraine, reasoning that developments “in and around Ukraine” arguably constitute a threat to alliance members in the region. Following consultations, Secretary General Rasmussen stated NATO would maintain contact with Ukraine through the NATO-Ukraine Commission while also engaging with Russia in the NATO-Russia Council.

Türkiye invoked Article 4 for the fourth time on July 26, 2015, the alliance’s fifth, following further attacks on the border with Syria, and to inform alliance members of measures it was taking in response. 31 people were killed and over 100 injured after an explosion at a rally in the border town of Suruç, some ten miles from the Syrian border. NATO described the incident as terrorism, saying such actions would not be tolerated. This time however, Türkiye did not request military support, and the new Secretary General, Jens Stoltenberg, pointed out that Türkiye had the second largest military in the alliance, describing it as a “very capable armed forces”. He also stressed that the buffer zone Türkiye had announced was not a measure NATO was part of.

The sixth invocation likewise came from Türkiye, on February 28, 2020, following the deaths of at least 33 Turkish soldiers in Syrian air strikes. Notable in this instance, is that NATO called out Russia as a backer of the “Syrian regime” and that the air strikes occurred in Idlib, Syria, and not on Turkish ground. In a press conference after consultations, Secretary General Stoltenberg informed that Turkish air-defenses would be augmented, and that early-warning planes continue to patrol, while naval vessels carry out port visits. Türkiye responded as well by launching counterstrikes against Syrian targets in Idlib.

The most recent invocation of Article 4 occurred on February 24, 2022, the day of Russia’s invasion of Ukraine. This, by Bulgaria, Czechia, Estonia, Latvia, Lithuania, Poland, Romania, and Slovakia – nearly all of NATO’s eastern flank and countries bordering Russia and Ukraine. In a press briefing on the same day as the invasion, NATO reiterated its commitment to Article 5 as “ironclad”, and following consultations, the alliance decided to take additional measures to ensure deterrence and the ability to defend itself. One day later NATO revealed it had deployed, and would continue to deploy, land and air forces to its eastern members, and that defense plans had been activated, including the drawing up of its response force – a first in history. Since then, individual NATO member states have trained Ukrainian military personnel while supplying funds and a range of military equipment to the besieged.

By forcing a topic to be discussed through consultations whenever a NATO member state feels threatened, Article 4 opens the door for diplomacy, during which decisions can be made that prevent NATO from being pulled into a conflict. Similarly, and often forgotten, NATO prevents its own member states from potentially entering into conflict against each other, with Article 4 acting as a platform for internal tensions to be diffused.

However, should the requirements for collective action be deemed to have been met, then Article 4 serves as a steppingstone to Article 5, with all members having to unanimously agree on decisions taken. So far, Article 4 has served to reinforce the alliance’s purpose and to take preventive measures that help deterrence, thereby diminishing the risk of an attack against a member state which would risk the invocation of the collective defense clause.

It is possible Article 4 will be invoked again during the course of the ongoing war between Russia and Ukraine, and at other points in the future. So far though, this mechanism has proven effective in reassuring alliance members and in sending a message to external powers – NATO works as intended.

2022-12-20
Oliver Hegglin
Previous: Pakistan faces the unfortunate consequences of Climate Change
Next: More than just a spectator? Japan’s involvement in the Ukraine crisis and implications for the Kuril Islands dispute