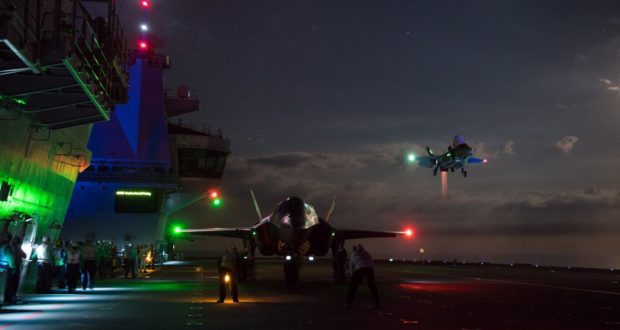 The Human Security Centre (HSC) has today published ‘Fire and Ice – A New Maritime Strategy for NATO’s Northern Flank’. The paper discusses the current challenge posed by Russia, and the options NATO has for countering it in the Atlantic and northern realms.

Given the recent clash between Russian and Ukrainian forces in the Kerch Strait, it has never been more important to understand the maritime elements of the challenge NATO faces when confronting Moscow. In this timely report, the HSC has examined:

“The recent Exercise Trident Juncture 2018, the US Navy’s decision to reform its Second Fleet to coordinate North Atlantic operations, and a parallel effort by NATO to set up its own Joint Force Command for the Atlantic, are all encouraging signs that the Alliance is taking the northern maritime realm seriously after a near exclusive focus on Eastern Europe in the wake of Russia’s actions against Ukraine.

However, much more remains to be done. Russia represents at threat to NATO’s sea lines of communication through the use of advanced submarines, is capable of targeting the alliance with a growing arsenal of conventional strategic weapons such as the Kalibr and Kh-101 cruise missiles, and continues to build-up its facilities in the Arctic. A firm commitment is now required by the Alliance to rediscover the forward maritime strategy that helped contribute to winning the Cold War.”

“Russia, under Putin, continues to allow dog-whistle politics of civilisational difference and siege mentality to push the boundaries of what might be termed ‘defensive’, and governs with ambitious militarisation within and military adventurism beyond. Thus, even Russia’s most ardent admirers must watch with dismay a great cultural, intellectual, political and economic power of our age reduce itself to a rogue state, repeatedly indulging in insecurity-fuelled thuggery to prove its might and forever at odds with international law and even states that would rather be close trading partners, neighbours and friends. When it comes to the Arctic, however, peace and cooperation has prevailed, not miraculously but by conscious choice and concerted action. After all, when one considers the opportunities and challenges arising from a changing Arctic, it is clear that peace and cooperation is in everyone’s interest. Yet, ensuing as they both do from a delicate balance, it is imperative that the balance be carefully maintained. Moreover, given the Arctic is not removed from, or immune to developments in, the adjacent North Atlantic, Nordic, Baltic and North Pacific regions, it is in the interest of every state, including Russia, for the Alliance to be capable of maintaining the vital balance in an ever-more integrated North.”

We also offer commentary to the international media, having appeared on outlets including the BBC, Channel 4, Sky News, Al Jazeera and CNN. Our commentary has been published in The Independent, The Telegraph, The Spectator, The New York Times, The Hill, IB Times and Evening Standard.

To contact one of our experts, please email: simon.schofield@hscentre.org