Home / Europe / “The country is ours, not theirs”: Romania’s anti-corruption protests and what comes next 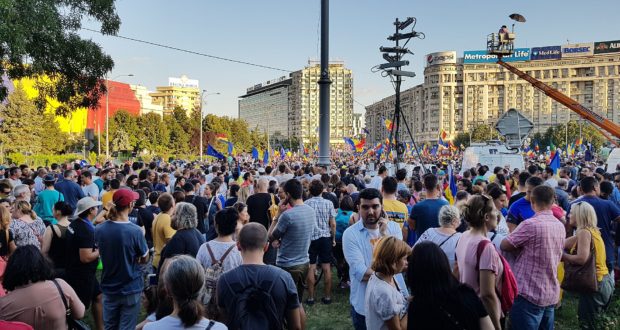 “The country is ours, not theirs”: Romania’s anti-corruption protests and what comes next

The weekend of 10-12 August was meant to make headlines for mass anti-government demonstrations organised and promoted by groups of Romanians working abroad. Instead, the overwhelmingly peaceful protesters were met with tear gas, pepper spray and water cannons, and videos showing police officers beating non-violent demonstrators holding their hands up made rounds in the national and international media. 452 people required medical assistance, and one man has died after being taken to the hospital on the first night of the protests. This is the first time in almost three decades that the Romanian Gendarmerie has used excessive force against protesters – and it is the first time since the early 1990s that a leadership has appeared to feel so threatened by a group of people demanding change.

Over 100,000 people from both in and outside Romania gathered on the streets of the capital and other large cities on 10 August to voice their opposition to the country’s embedded high-level corruption, low wages, and the governing Social Democratic Party (PSD)’s recent attempts to weaken the judiciary. In Bucharest, waving Romanian and European Union flags, people made their way to Victory Square and the government headquarters, where they called for the entire cabinet’s resignation and early elections. As the evening progressed, small and scattered groups of hooligans and rioters reportedly mingled in with the peaceful demonstrators, and started throwing bottles and trying to push past the security lines. The police chose to respond with indiscriminate force rather than via the removal of these groups from the crowd, and tear gas, pepper spray and water cannons began being used at frequent intervals against families with children, journalists and the elderly. Protesters of all ages were injured in this determination on the part of the Gendarmerie to clear the square.

Romanian President Klaus Iohannis condemned the Gendarmerie’s brutal intervention, calling the violence used “strongly disproportionate to the actions of the majority of people in the square”. Taking the opposite stance, in a statement issued on 11 August, spokesman Marius Militaru defended the Gendarmerie’s use of force, arguing that officers acted on direct orders to evacuate Victory Square from the Bucharest prefecture, the government authorities in charge of the capital. Hundreds of people have since filed complaints against the Gendarmerie, and an investigation has been launched into the latter’s excessive use of force against the anti-corruption protesters. Prosecutors are also investigating Bucharest prefect Speranta Cliseru and Interior Minister Carmen Dan on the suspicion of abusive behaviour, abuse of office and negligence.

Anti-government demonstrations have been a regular occurrence in Romania since February of last year, when half a million people took to the streets to protest an emergency decree that aimed to effectively decriminalise low-level corruption. Since winning the parliamentary elections in December 2016, PSD have attempted to ease penalties for corruption and abuse of power, pardon public and political figures sentenced for fraud and misconduct, and decriminalise acts of graft of which their members have been found guilty. For the past year and a half, party leader Liviu Dragnea, who is being kept out of public office by a conviction for electoral fraud and stands to be imprisoned for abuse of office, has been trying everything in his power to keep himself and his allies out of jail and in control of Romanian politics.

One of the triggers of the August protests was a recent and powerful blow to Romania’s anti-corruption drive. After months of intense pressure from the Social Democrats, President Iohannis approved the dismissal of Laura Codruta Kovesi, head of the National Anti-Corruption Directorate (DNA) who many see as a key driving force in the fight against corruption. With Kovesi at the helm, the DNA obtained convictions for approximately 90 percent of the officials prosecuted, and the list of convicted officials includes cabinet ministers, national and European members of the parliament, and mayors. Her dismissal was PSD’s golden hour, who have repeatedly accused the anti-graft prosecutor of political bias and abuse of power.

With presidential elections taking place next year, and parliamentary ones the year after that, Dragnea and his allies are determined to ensure PSD maintains a position of power. This would not only provide him with the much-coveted immunity from prosecution, but also the much dreamed of role of head of the government. In the days following the protests, Dragnea’s latest puppet and Romania’s fourth Prime Minister in just over a year and a half – Viorica Dancila – sent a letter to European Commission President Jean-Claude Junker, claiming that what happened on 10 August was a failed attempt to overthrow the government. Dragnea himself dismissed all calls to resign as head of the party, and attempted instead to distract attention by declaring that in 2017 he was the target of an assassination attempt organised by forces from outside the country. The leader of the Social Democrats added that the alleged attempt was investigated at the time by the authorities, but the General Prosecutor’s Office denied the existence of any such investigation.

PSD have not won a presidential election since 2000, but they have been steadily successful in local and parliamentary elections over the years. The Social Democrats can rely on a core electorate for support, who are kept loyal with bribes in the form of food, drink and even money, the raising of pensions and salaries now and again, and symbolical acts that see local authorities planting trees in parks, painting playgrounds, and increasing the number of benches for public use. Aside from the electoral fraud they have been accused and found guilty of, PSD can also rely on a predisposition on the part of younger voters to stay at home on election days, as well as a fragmented opposition that finds it difficult to gather sufficient support and present a realistic threat.

This, however, might be slowly but steadily changing. An initiative called “No Criminals in Public Office” (“Fara Penali in Functii Publice”), backed by the Save Romania Union (USR) – the third force in parliament – has gathered over 1 million signatures from 21 regions across the country, more than double the amount required by law for a citizens’ initiative to modify the constitution to be submitted to parliament. The initiative, which is on track to be submitted by the end of the year, aims to introduce an article in the Romanian constitution that would see any politicians with a criminal record banned from running for local, legislative and presidential elections, unless they are rehabilitated or pardoned, or the crime for which they have been convicted is decriminalised.

Whether or not USR will gain enough parliamentary support to pass the legislation remains to be seen, as the ruling PSD and their junior ally, the Alliance for Liberals and Democrats (ALDE), currently hold the majority. Fear of further protests, however, is likely to make PSD reluctant to reject it; and further loss of supporters is something they cannot afford. PSD is in free-fall in the opinion polls, and Dragnea’s popularity has gone from 22 percent to only 12 percent since May of this year. From decisions that benefit only themselves and their own to outright disrespect for the people they claim to represent, even many of their voters believe they have gone too far this time.

The events of 10-12 August have also caused tensions within PSD itself, with key party members declaring their disapproval for the decisions made that led to the protests. Party vice-president and former Education Minister, Ecaterina Andronescu, sent an open letter to Dragnea, asking him to resign as party leader “for the sake of Romania and the Social Democratic Party”. Bucharest mayor Gabriela Firea also joined in, and declared she holds Carmen Dan and Liviu Dragnea personally responsible for the way in which the events of 10 August unfolded. Firea herself, however, was initially reluctant to give her permission for the protests, and after going back and forth on the matter, the PSD-dominated City Hall declared the rally was no longer authorised three days before it took place.

Romania is set to assume the European Union’s rotating presidency in January 2019, and as MEP Guy Verhofstadt put it, it is essential that the country stays on the path of reform as it will soon need to lead by example. In a democratic country that has been a European member state for more than a decade, the normal course of events would have been for both Dragnea and Dancila to resign and allow for early elections to take place. Instead, they have both tried to justify the excessive use of force by calling the protests an attempted coup, and key players in the party itself are currently playing the blame game. This, unfortunately, is seen as the normal course of events by the governing PSD – dodging accountability is what they do best, and it is the only tool that is currently helping them keep their grip on power.

Demonstrations are, at the minute, the only thing keeping the government in check; unfortunately, they are not enough if the change the country needs is to be achieved. As there is no clear leader or unified voice among the protesters, it is at the upcoming series of elections that change will need to be brought about, which is why the next two years are crucial. The “No Criminals in Public Office” initiative is proof of how powerful a united people can be – and the employment of one democratic tool needs to be followed with another if activism is to lead to the necessary results.

In the past two years in particular, Romanians have seen what their taking to the streets can achieve. Emergency ordinances have been retracted, entire governments have resigned, and the ruling elite has taken a step back and reconsidered its course of action. It is time, however, that the mobilisation that has been so successful in bringing these changes about goes further, and aims for something more permanent. The Romanian opposition needs to use this momentum and build itself a strong campaign, and the people need to ensure their hopes for the future are made clear at the ballots. Next year’s presidential elections will coincide with the 30-year anniversary of the revolution that turned Romania into a democratic country – what better way to celebrate this than by exercising a hard-won democratic right?