Home / Asia and Pacific / President Duterte’s volte-face on Philippine foreign policy
In the world of realpolitik, President Duterte needs to repair the country’s relations with its only bulwark, the US, unless it wishes to grant its territorial claims to China on a silver platter.

The recent chill in relations between President Barack Obama and President Rodrigo Duterte of the Philippines may have induced the latter’s tilt towards China, in a puzzling volte-face of Philippine foreign policy. President Duterte’s predecessor, Benigno Aquino, led the Philippines during a period of hostile relations with China, from the Scarborough Shoal stand-off in 2012 which ended in China’s favour, to periodic incidents over fishing vessels on both sides, to overseeing the landmark arbitration dispute at the Permanent Court of Arbitration in the Hague on the South China Sea that the island nation brought against China under UNCLOS. Former president Aquino began to rebuild cooperation with the US on the military front (after protests against foreign military presence from the 1990s resulted in withdrawal of US bases and troops) by signing up to the Enhanced Defense Cooperation Agreement (2014), which gave the US widespread access to bases in the Philippines on a rotational basis. Once approved by the Philippine Supreme Court, this provided the US military much-desired strategic access to the heart of the South China Sea, while enabling the Philippines to acquire a minimum level of deterrence against any unilateral Chinese action and augment its poor defense capabilities.

However, with a series of off-the-cuff remarks, President Duterte appears to have shifted tracks on former President Aquino’s stratagem. The US and other countries have issued strongly worded statements against human rights abuses in the form of indiscriminate killings by police and vigilantes in President Duterte’s crackdown on drugs, while Beijing has lauded his efforts and even built a new drug rehabilitation centre in the Philippines. The war on drugs was the issue upon which President Duterte’s tough-talking campaign rested, and the President consequentially responded to this slight on his main policy agenda with vitriol against his accusers that made headlines worldwide.

As relations further soured after the US cancelled a meeting between President Obama and President Duterte on the sidelines of the ASEAN summit in Laos, President Duterte has made serious remarks sidelining the US-Philippines partnership. He has called for a “separation from the US” which he later clarified as a “separation in foreign policy” – or a foreign policy independent of Washington’s path. His statement that he would “open relations with Russia and China”… “on the other side of the ideological barrier”, speaks of a new foreign policy molded by the President’s leanings on the left wing. He generated alarm when he remarked that he would end US-Philippines joint military drills in the South China Sea since China “does not want” it, and annul the Enhanced Defence Cooperation Agreement that forms a key part of Washington’s “pivot to Asia”. He has declared that the Philippines will buy Russian and Chinese military equipment to replace purchases from the US. The compatibility of weapons from China and Russia with the current equipment of the Philippines is questionable given its long-standing tactical and technical synergy with the United States. Further, China and Russia are unlikely to sell advanced equipment unless they are fully assured that a regime change in the Philippines will not cause a reversal in policy that would endanger their technical secrets.

On the other hand, President Duterte has extended the olive branch to China with friendly overtures and a state visit, to which China has responded with seeming eagerness. Following the arbitration court’s ruling in July, relations between China and the Philippines plunged to new depths as China refused to accept or heed the decision. Responding positively to President Duterte’s unilateral show of bridge building, the Chinese government has allowed the resumption of shipments from blacklisted Philippine fruit exporters (China had earlier blocked banana exports, an important export for Filipinos) and lifted the tourism ban imposed in 2014.

During his recent state visit to China, President Duterte chose to sideline the South China Sea issue, placing it as a subject of much less priority than the country’s urgent need of Chinese capital for infrastructure development and economic growth. Over $15 billion worth of investment projects in the transport, energy, steel and agricultural sectors were signed during the state visit and a 200 strong business delegation accompanied President Duterte to China. Chinese FDI figures in the Philippines are currently dismal when compared to the US, and the Philippines has been excluded from the One Road One Belt initiative and the Asian Infrastructure Investment Bank and their associated infrastructural grants and assistance due to its earlier hardline stance on the South China Sea issue. President Duterte seeks to bridge this gap and would like for the Philippines to join both projects.

The Philippines is one of the poorest countries in the ASEAN with a per capita GDP of under 3,000 USD. Therefore, President Duterte understands that nationalistic concerns cannot come in the way of development. However, by risking alienation of the US in his eagerness to gain China’s approval, President Duterte may create major security risks for the Philippines in the future. Assuming his comments against the US were not merely tactical statements to gain Chinese investment, but indicative of a serious policy shift, the Philippines is unilaterally endangering its security guarantee in the region given the dreary state of its military (as Duterte himself says “We can’t beat [China]”). US officials have been taken aback by President Duterte’s shift in policy and have reacted with hopeful and optimistic assertions, such as Secretary of Defence Ash Carter’s statement that the partnership is “ironclad”. However, there is a growing lack of toleration for free-ridership in the US, especially with President-elect Donald Trump’s emphasis on a hands-off foreign policy that is attractive to many sections of the American public.

President Duterte has responded to the implications of Trump’s presidency on bilateral relations, saying, “I don’t want to pick a fight because Trump is already on the scene,” reiterating his formerly expressed personal admiration for the future President. However, he has also hastened to add that he will not renege on his previous declaration of charting an independent foreign policy. President-elect Donald Trump has declared during his campaign that he will encourage countries in the US security alliance to become more self-reliant in their defence capabilities and discourage free-ridership, since he claims the status quo is “costing us (the US) a fortune”. However, a better personal equation between President-elect Trump and President Duterte may yet shift the balance in the Philippines’ favour. On his part, the Philippine president has repeatedly questioned if the US will come to the Philippines’ aid if there is a military conflict between Manila and Beijing, given the huge risks involved and the required Congressional approval, and has hence chosen to side-step the issue in which he sees a lost cause. But it is still impossible for him to declare China the sovereign of Philippines’ claims without losing public approval.

China has indicated that it could offer President Duterte the incentive of fishing rights in the Scarborough Shoal area, lifting the four-year fishing ban, but President Duterte is unlikely to recognize China’s sovereignty over the shoal in an unfair quid pro quo. If President Duterte expels US forces from the Philippines, as he has outwardly stated, the US will lose its strategic thrust in the region and the Philippines will lose its vital security partnership. The fracture with the Philippines may make the US less likely to act upon infringements of Philippine sovereignty to discourage free-ridership, making President Duterte’s opinions on the issue a self-fulfilling prophecy. The balance in China-ASEAN is tilting toward China, building pressure on the other claimants in the South-China Sea and further threatening the right to free navigation and oil exploration in perhaps the most economically vital region of the world. President Duterte’s suddenly sunny picture of the world is troubling, for unless he continues the measures that ensure some level of retribution if China were to unilaterally take over islands, there is no incentive for China to desist.

Kalyani Subbiah is currently a Masters student of Development Studies at the Indian Institute of Technology, Madras. She has previously interned with her institute's China Studies Centre, authoring a special report on China's 'One Belt One Road' initiative. Her research interests include international development and aid flows, China in global politics, Russia and NATO, and the Middle East. 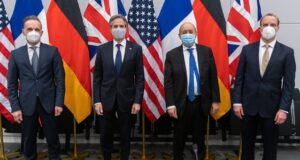