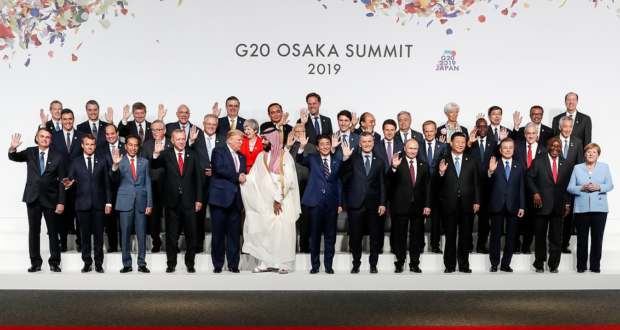 The Trials, Triumphs and Aftermath of the 2019 G20

Between 28 and 29 June 2019, Japan hosted the 14th annual G20 summit. Occurring at a time of peaking international tensions – particularly in terms of trade and environmental issues – the 2019 summit tested the resolve and priorities of the international community.

With no permanent secretariat, agenda setting for G20 summits falls to the host states. Importantly, whilst often categorised as a procedural task, agenda setting has grown as a key element for G20 member states with it offering an opportunity for the influence of discussions and promotion initiatives.

Embracing this power, Japan set an ambitious agenda for the 2019 summit. Markedly the agenda included 8 main themes, which sought to target and facilitate discussions relevant to: the adaptation of the world economy, reformation of global trading systems, removal of structural impediments to growth, adaptation of the world economy to the data revolution, combating climate change, advancement of sustainable development, adjusting employment policy to reflect ageing societies and the empowerment of women in the workforce.

As is an increasing trend with multilateral summits, the high levels of friction and frustration currently present in the international community saw the 2019 G20 summit be approached cautiously and with minor expectations.

Despite such a backdrop, the summit ran efficiently and – with the important but often overlooked work of ministerial level meetings – saw a number of useful materials being adopted and made available for the utilisation of local governments and corporate and civil society to proactively respond to issues outlined in the 2019 agenda. The summit also saw forms of conciliation and consensus, with the leaders of member states adopting the Osaka Leaders’ Declaration.

Comparative to the utility of the materials adopted at ministerial level, the leaders’ declaration sheds light on the commitments of the leadership group along with the obstacles that were faced throughout the summit. To this end, the opening paragraphs of the declaration simultaneously acknowledge a rise in both trade and geopolitical tensions. Dialogue is also recognised – and encouraged – as a key element in the attainment of “[…] strong, sustainable, balanced and inclusive growth” in the declaration. The leaders also committed to the continuation of institutions such as the WTO and IMF, but emphasis on the need for reform and adjustment of such organisations to ensure a “level playing field to foster an enabling business environment” were equally made. The complimentary and important role of bilateral and regional free trade agreements in such a process were also recognised and emphasised.

Beyond trade, environmental issues and climate change were critical features of the leaders’ declaration. Notably, a form of consensus was promoted in the declaration through references to an urgently required paradigm shift in business and innovation to address the “…complex and pressing global issues and challenges” associated with the environment and climate change. References were also made to the commitments of signatories to the Paris Agreement and the adoption of the “Osaka Blue Ocean Vision”, an “implementation framework” designed to reduce increasing levels of marine pollution. However, the US clearly unaligned itself from these positions, with the declaration including a reemphasis of the US’ withdrawal from the Paris Agreement and an outline of its unilateral initiatives being pursued in such fields.

Whilst not an unprecedented occurrence in international affairs, the delineation by the US in the declaration exemplifies a growing trend in international institutions and meetings whereby consensus is conditional and/or unattainable. Equally, it sheds light on the manner in which underlying geopolitical and economic initiatives are directly affecting the responses to global issues.

With this in mind, the keen focus on bilateral meetings – which are only elements to the larger summit – in coverage of the 2019 events is not surprising nor insignificant. To this end, the bilateral meeting between the US and China was a key focus and headline associated with the 2019 summit. Importantly, whilst it did not lead to a full resolution of the states’ trade issues, the meeting did facilitate an abatement of additional sanctions and a commitment to re-engage in negotiations. In contrast, the bilateral meeting between the UK and Russia did little to thaw state tensions, with the UK reportedly using the summit as a further occasion to demand those responsible for the 2018 Salisbury attack be brought to justice. Moreover, albeit largely overshadowed by focus on the aforementioned meetings, India led a number of important meetings (including between Russia and China; and Japan and the US) that spotlighted the states’ increasing position of power within the G20 and its unique balance of political and economic interests.

Acknowledging the political and economic tensions that plagued the lead up to the June 2019 summit, low expectations for sizeable results were appropriate and well measured. That being said, the outcomes of the summit – whilst not drastic – exhibit the benefits of engagement and offer key indicators relevant to the evolving nature of the international community and the issues which it faces.

To this end, the summit demonstrates the manner in which engagement can mitigate the prospects of conflict. It also highlights the power and necessity of alignment in approaches to global issues. Recognising such factors, along with the facts that the members of the G20 summit represent over 80% of global GDP and 2/3 of the global population, the status of the G20 as a premier forum for international cooperation on issues facing the global community remains true.

Nevertheless, events that have unfolded in the weeks following the conclusion of the summit serve as a powerful reminder of the temperamental nature of such benefits and the speed in which their value can be undermined. For example, the increasing dispute between South Korea and Japan and the derailment of re-engagement between China and the US exemplifies the delicacy of engagement and the impact of geopolitics on trade and security. Likewise, the dismantling of international frameworks – such as the INF Treaty – and increasing events of environmental and conflict induced migration spotlight live transnational issues that can only be resolved with unified responses.

Recognising this, a pattern of counter-balancing is clear. However, and as with other aspects of the international domain, such moves should not be interpreted as an indicator of success or failure. Rather, they should be simply seen as an additional element to the complex issues that are being sought to be addressed and an acute reminder of the powerful and necessary role of political will.

2019-08-12
Alexa Reith
Previous: Trump’s quest for allies against Iran
Next: Guest Opinion: Turkey should be punished and kicked out of NATO