Home / Uncategorized / The “terrorists” fighting for democracy in Myanmar 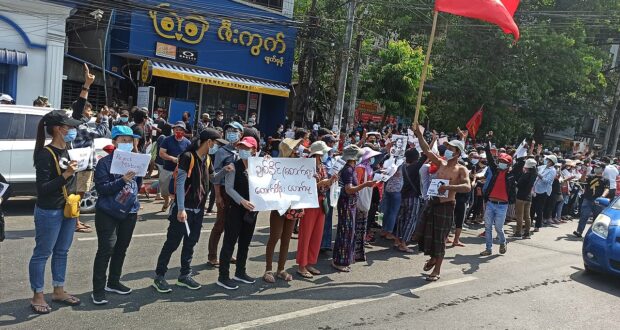 The “terrorists” fighting for democracy in Myanmar

Myanmar, formally known as Burma, is a south east Asian country which borders India, Bangladesh and China. Originally Myanmar was part of the British Empire. They achieved independence in 1948 and established a parliamentary system to run the country. Myanmar’s democracy was laid to waste in 1962 when, General Ne Win of the Myanmar military lead a coup d’état, forming a socialist military government. However, after a protracted period, the military began loosening its grip on power, and in 2015 the citizens of Myanmar were able to vote in a general election which had not been interfered with by the military.

For the first time in over 50 years, the people of Myanmar had not been given simply the illusion of freedom, and were instead allowed to choose their elected representatives. This allowed the National League for Democracy (NLD) party to achieve an absolute majority. The party was led by Aung San Suu Kyi, a prominent. spokesperson for democracy. Despite accusations of collaborating with human rights violations against the Rohingya people, Aung San Suu Kyi and the NDL party were able to have a successful and prosperous first term, giving the people of Myanmar true political freedom for the first time since the military had taken control of the country in 1962.

In late 2020, Myanmar held another general election and once again the NDL and Aung San Suu Kyi won by a landslide, claiming victory over the military party and giving the NDL another term in power to make real change to the country. However, the victory of the NDL was short lived after the military refused to believe they lost two general elections in a row. This forced them to switch to underhand tactics like accusing the NDL of voter fraud even though they had no evidence to suggest that voter irregularities took place.

Once the military realised they would have to a best wait until the next general election to regain their control over Myanmar, and at worst might be seeing their influence terminally decline, they acted. On February 1 2021 the Myanmar military performed another coup d’état. The military had rounded up Aung San Suu Ky and all other NLD MP’s and once again had control over Myanmar.

The people of Myanmar were not ready to lose their freedom and go back to a military controlled dictatorship. After news of the coup had spread throughout the world, nationwide protests started to develop to show their distrust of the military and the coup d’état. Many peaceful protests were met with violent responses by the military to repel the protesters. It was clear the military were going to stop at nothing to keep their power and control over Myanmar’s people. As a consequence, the civilians took up arms against the military.

Soon after the military reinstated their dictatorship, the people banded together and formed the Peoples Defence Force (PDF). A loose network of different civilian groups, who are fighting the military using guerrilla warfare, in the hopes that they may be able to free Myanmar once again. Some see the PDF as unnecessary as conflict is unpopular in the majority Buddhist population. However, others would argue that they are a necessity due to the military’s overwhelming and abuse of power, which is being supported by Russia.

With the PDF being made up of mostly civilians their access to weapons is limited, and they have resorted to making their own land mines and rockets to combat the armoured vehicles used by the Myanmar military forces, as well as stealing the guns of dead soldiers just to give themselves a fighting chance against the military. However, the cost of freedom is taxing and due to the PDF’s inexperienced fighters the death toll is rapidly climbing. Since the coup in February of 2021, there have been a reported 12,621 deaths.

Because of the guerrilla tactics used by the PDF, they have become hard to locate. As a result, the military have resorted to barbaric tactics to obtain information on the PDF and their members. These actions include raiding random villages across the nation and torturing, or in many cases killing people under the guise of them being members of the PDF. However, we know that the people being killed are not members of the PDF, as many of the victims of these attacks are disabled or elderly – people who couldn’t flee and therefore could not be playing an active role in PDF attacks.

One example of the extreme violence utilised by example was in the Yin Village, where victims were tied to trees and beaten to death using stones or rifles. It’s thought that these attacks are collective punishment for the PDF’s attacks in the nearby area. The general spokesperson for the Myanmar military, Zaw Min Tun said, “When they treat us like enemies, we have a right to defend ourselves”. However, the military are killing innocent people who are unfortunately caught in the crossfire of tis civil war. This isn’t self-defence, these are crimes against humanity.

Right now, conflict is still developing throughout Myanmar, constantly escalating as the PDF becomes more heavily armed and effective in their bloody fight for freedom. However, there are people caught in the middle of this civil war, who are suffering for simply living. Currently the Myanmar military have shown no signs of backing down and continue to control the country, in a dictatorship and so the citizens of Myanmar and the PDF’s fight, to bring freedom back to their country continues.

2022-04-08
Ben Richards
Previous: Patterns of Coups in West Africa
Next: Was the use of drone strikes by the Obama Administration racialised?

Ben Richards has recently completed his A-Level studies in Law, phycology and Philosophy and is interested in rising awareness of human rights issues around the world. He will be working as a global Leadership Fellow until he begins employment with the west midlands police in September.