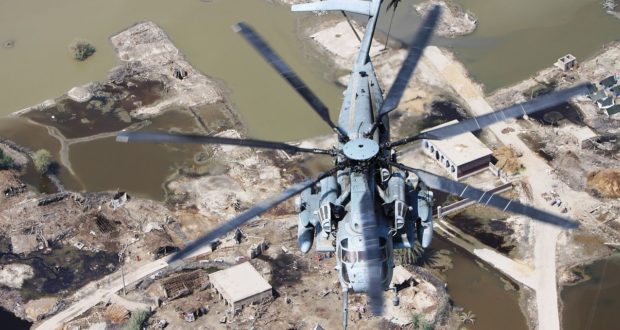 Since 1970 the number of natural disasters across the world has more than quadrupled[1], causing increasing risk of destruction and consequent human suffering. According to the New England Journal of Medicine, since 1990, natural disasters have affected roughly 217 million people annually[i]. The economic costs of such disasters are great and often result in slow economic growth for decades, the burden of this often being borne by the least affluent. However, for countries or regions with pre-existing political instability, social vulnerabilities, and radical group activity, the cost of reconstruction is only one of many potential problems which will need to be rectified.

Depending on the scale and impact of the natural disaster, authorities in affected locations are likely to be overwhelmed with the burden of recovery. In most cases, this process will involve the reconstruction of homes, businesses, crops and critical infrastructure. In such events, the shortcomings of the local authorities in the provision of aid can be relieved by groups with involvement in terrorist or other extremist activity. In providing relief, these organisations can directly benefit from the political discontent that exists and use this to gather support or even recruit members. On occasions in which villages feel abandoned by the international community and their own government, this vulnerability may become increasingly common.

An illustration of this came in the aftermath of the 2010 Pakistan floods in which a minimum of 10 million citizens were thought to have been displaced or otherwise affected[2]. Homes and entire villages were consumed by the rising water levels, causing commercial and residential damage across swathes of the country. Despite the scale of the destruction, in the north-west region of the country the presence of the international community and local government was sparsely felt. Overwhelmed by the extent of the flooding, Jamaat-ud-Dawa – a radical Islamist group said to be a front for Lashkar-e-Taiba, the group responsible for the 2008 terrorist attacks in Mumbai – provided support to the affected communities[3]. They claimed to have over 2000 members working in the affected regions for the provision of food, shelter, spiritual assistance and medical care.

In such a situation radical groups can point to the inadequacy of the government response. Acting in such an altruistic way during a time of perceived abandonment, provides a plausible explanation for communities who previously rejected the tactics of such groups coming to accept them. The failure of national institutions to act thus allows the garnering of sympathy and support for these groups.

As well as cultivating support, these groups will be able to sow discontent among the populace, animating feelings of resentment and distrust towards those in positions of power. Pointing to the inadequacy of the government response, citizens are susceptible to the ideologies of many of these groups; this may be particularly likely for those groups to which the removal of the current system of government is key to their ideological goals. Given the severity of the humanitarian crises, this could allow a change in perception of the groups from their previous brutality against civilians to a palatable ideology to which they may relate. These villages, therefore, become a breeding ground for spreading their ideals. In extreme and not wholly unimaginable circumstances, this environment of disillusionment may even encourage recruitment.

It is not inconceivable that extremist organisations could also exploit this vulnerability to mount terrorist attacks. Instead of – or as well as – providing aid or critical services, terrorist organisations could use the weakened capacity of the government and security sector as an opportunity to launch violent attacks against citizens and aid workers, further undermining their trust in the government to keep them safe and shredding the social contract between state and citizen. It has been widely discussed that terrorist organisations often adapt their strategies to the context of the territory in which they operate[4]. Carrying out successful attacks against the government in a time of publicly perceived inadequacy could proliferate an attitude of government weakness.

It is important to note that the example of Pakistan is only one of many in which natural disasters have occurred in an administratively weak environment with pre-existing terrorist activity. In 2017, uncharted levels of monsoon rain caused devastation in parts of Bangladesh, India and Nepal, affecting more than 40 million people[5]. The Bangladeshi authorities were already under significant strain caused by the influx of Rohingya refugees from Myanmar and have a number of active extremist groups within their borders. Given the ease with which extremist ideology may be diffused across borders, the risks caused by natural disasters could become increasingly dire.

Given the link between climate change and increases in extreme weather patterns, for the sake of stability and preventing the growth of extremist groups, the international community should seek to provide greater support to humanitarian relief. Lack of response in countries or regions with pre-existing political and social vulnerabilities present opportunities for terrorist organisations to recruit members, gather support and spread their ideology.

We live in an increasingly interconnected and globalised world in which terrorism is a shared threat spreading beyond borders. Where possible, the global community – particularly the developed West – have the obligation to develop and provide an effective aid strategy that actively benefits ground level conditions of those affected by these crises. Additionally, in the hope of long-term recovery and stability, it is critical to provide support to the reconstruction of commercial and essential infrastructure. If the international community fail to act effectively, radical terrorist groups have the opportunity to fill this void and gain support in their ideological mission.

[3] Tellis, A. (2012) “The Menace That is Lashkar-e-Taiba” Carnegie Endowment for International Peace, available at: https://carnegieendowment.org/files/LeT_menace.pdf

Katie Miller is currently completing an MSc in Security Studies at UCL, having recently graduated with an MA in International Relations from the University of Edinburgh. Her research interests include international security, terrorism, counter-terrorism, political Islam and human rights. She has previously interned at the Duke-UNC Rotary Foundation and the Commonwealth Parliamentary Association UK, assisting in the planning of a capacity building workshop for the National Assembly of Nigeria.