Home / Latest Articles / South Sudan, UNMISS and International Responsibility
When the most recent state in the world celebrated its third anniversary in July this year, it was amid renewed ethnic violence and a protracted refugee crisis influencing both the country and the wider region. Having fought for independence from Sudan for decades, the South Sudanese state established in 2011 exhibit all the signs of a weak, and possibly failing, state.

When the most recent state in the world celebrated its third anniversary in July this year, it was amid renewed ethnic violence and a protracted refugee crisis influencing both the country and the wider region. Having fought for independence from Sudan for decades, the South Sudanese state established in 2011 exhibit all the signs of a weak, and possibly failing, state.

Since December 2013, the power struggle between the former deputy Riek Machar and the current leadership of Salva Kiir have escalated into a spiral of violence predominantly between the Nuer and the Dinka ethnic groups, respectively supporting Machar and Kiir. Reports of ethnically based violence and possible genocide highlights the urgency of the situation[i]; nonetheless, cease fires are repeatedly violated by both sides and the pledge by the two leaders to establish a transitional government have yet failed.[ii]

Fears of famine are coupled with reports of an unabating flow of arms to both sides, signalling the weakness of the EU and US embargoes currently in place.[iii] Without a genuine effort to seek a durable solution, the risk of a new Somalia must be considered a very real possibility as South Sudan was recently ranked the most fragile state in the world.[iv]

As South Sudan saw daylight in July 2011, it was accompanied by the establishment of the United Nations Mission in South Sudan (UNMISS), set to assist and facilitate the new republic in the transition from decades of civil war to a viable and effective sovereign state. The mission received an extensive mandate to assist the government in consolidating peace and developing mechanisms for conflict prevention and resolution; state- and capacity-building, economic development and the rule of law; and disarmament, demobilisation and security sector reform.[v]

UNMISS was further tasked with protection of civilians and humanitarian personnel and given a Chapter VII enforcement mandate to use all necessary means in fulfilling this task. Following the eruption of violence in December 2013, the UN strengthened the mandate from the initial 7,000 to 12,500 military personnel and, importantly, shifted its strategic focus from government support to strict impartiality.[vi] The protection of civilians has been placed at the forefront as upwards to 100,000 civilians have sought refuge in UN bases across the country.[vii]

Despite the contribution of the mission in relation to protection of civilians, the weakness of UNMISS in terms of either detecting or stemming the violence should be of great concern. The shadow of Bosnia and Rwanda, where the international community failed both to prevent the outbreak of violence and the atrocities that ensued, looms large.

The apparent weakness of the mission in South Sudan offers insights into how the international community can and should assist weak states in their transition to peace and stability and raise more general questions regarding international approaches to state-building, reflecting the continued need to address the tension between state and human security in conflict and post-conflict societies.

In South Sudan, by 2011 a state in nothing but a name, the international responsibility to assist in state-building was arguably put to its litmus test. As the third pillar of the R2P doctrine outlined in the ICISS Report of 2001, the responsibility to rebuild focus on efforts to handle underlying sources of conflict with the aim of preventing future violence.[viii] While this pillar of the R2P was not included in the version of the doctrine adopted by the UN in 2005[ix], it nonetheless highlights the increasingly complex nature of peace and state building and the importance of combining emergency responses with long-term international commitment. In the former Yugoslavia, where open conflict ended over a decade ago, the international efforts at building viable states in Bosnia and Kosovo continues to this day. There is no reason to believe that the situation in South Sudan, arguably much less equipped for statehood, requires less in terms of either time or money.

In light of the current situation, the prospect of success looks dim. One of the central problems, highlighted by for example the International Crisis Group, has been the policy of government support and its compatibility with tasks that demand a greater degree of impartiality, including reporting on human rights abuse and civilian protection.[x] The experience of UNMISS clearly demonstrate the difficulties involved in striking the right balance between supporting the state and supporting the people and the adverse effects that choosing one over the other can have on achieving peace and security in the longer term.

On a more general level, the UN mission in South Sudan also raises questions regarding the extent to which support for a particular government can and should be considered a viable path to state stability, especially when the government itself contributes to violence and instability.

A different but related problem stemming from the approach initially taken by UNMISS is the lack of accountability for both present and past crimes and atrocities. In a recent report from Human Rights Watch, the descent into violence is partly attributed to the insufficient way in which the atrocities committed during the previous conflict with Sudan was handled by both the new leadership and the international community.[xi]

Rather than establishing mechanisms for transitional justice and reconciliation, UNMISS accordingly prioritised supporting the state structures, leaving past injustices and potential sources of conflict unresolved.[xii] Neglecting the link between justice and lasting peace in South Sudan may thus have served to exacerbate the conflict, further complicating the process of finding an acceptable solution for both the parties and the wider population.

Similarities can be found with the approach taken by the UN mission following the civil war in Sierra Leone (UNAMSIL, 1999-2005). As in South Sudan, the mission was given a broad mandate but failed to address underlying sources of conflict. This narrow focus on institutional capacity over societal concerns is argued to have contributed to a culture of impunity and lack of trust in the central authorities.[xiii] While the particular approach taken to transitional justice has been varied, the need to deal with the past must be considered an integral factor in building lasting peace and stable communities.

When viewed through the lens of the international responsibility to assist, the situation in South Sudan may shed light on a number of problems that will face the international community both in the short and long term.

Of fundamental concern is how to balance questions of state and regime security against both the security of the population and the long-term stability of the state. The case of South Sudan furthermore highlights the importance of adopting a holistic approach to peace- and state-building, taking into consideration not only the strength of the government and formal institutions but also wider concerns for human security and transitional justice. The UN has increasingly stressed the need for local ownership in peacebuilding processes but the continued support of the international community to the people of South Sudan is clearly a key element in building lasting peace.[xiv] At the same time, the lack of credible pressure from the AU and wider international community means the two leaders have been allowed to prolong negotiations, thereby contributing to the instability on the ground with autonomous groups and local militias increasingly taking part in the violence.[xv]

While the new mandate in May 2014 clearly signals a shift in the approach of UNMISS from supporting the government to strict impartiality, much damage may already have been done. It is therefore of vital importance to ensure that the broader lessons from UNMISS and South Sudan are not forgotten. The international community must at the very least ensure that it is part of the solution rather than the problem.

Stina Hartikainen is a Research Assistant with the Human Security Centre.

[xiv]        For an in-depth analysis of the tension between national and local peacebuilding, see Malik, H, (2014). ‘Bringing Local Back In: a reassessment of peacebuilding strategies in the DRC’. Human Security Centre, Issue 3, No. 8. [http://www.hscentre.org/uncategorized/bringing-local-back-reassessment-peacebuilding-strategies-drc/]

2014-10-01
Stina Hartikainen
Previous: ‘No fly’ and ‘no-drive’ zones to become a long-term reality in northeastern Syria?
Next: Answering the Big Questions: The Month Following the 2014 NATO Summit

Stina Hartikainen is a Senior Fellow in the Policy Unit. She has previously worked at the Institute for Security and Development Policy in Stockholm. Stina has written extensively on Russian policy in North and South Caucasus, especially in relation to Chechnya, South Ossetia and Abkhazia. 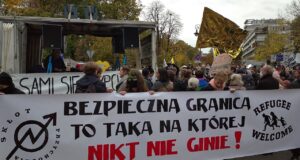