Home / Latest Articles / Japan and India: An Emerging Partnership of Strength and Influence 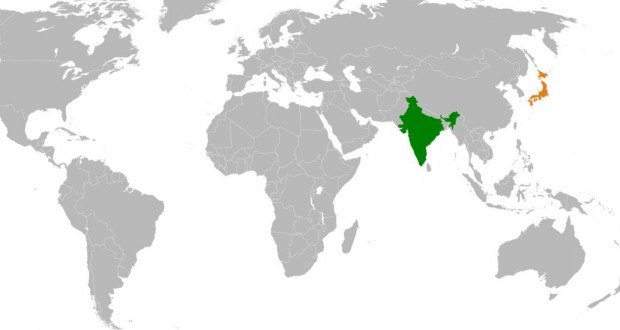 Japan and India: An Emerging Partnership of Strength and Influence

The budding partnership between India and Japan presents an intriguing development for the strategic future of the Asia-Pacific region from both an economic and security perspective. Their cooperation could well portend an ideal union of factors. Tokyo has long been an economic heavyweight, but Prime Minister Shinzo Abe’s efforts to mature his country’s defense capabilities and broader diplomatic presence represent a significant transformation for Japan’s role throughout the region. Conversely, New Delhi has for some time been seen as a sleeping giant “punching below its weight,” to borrow a cliché, in Asian affairs. Yet, like Japan’s leader, Prime Minister Narendra Modi appears to be pursuing a more active role for India in leveraging his state’s tremendous assets, thereby shaping the region’s future. He has pursued a diverse array of economic modernization and reform programs while similarly emphasizing more robust diplomatic and security roles for India. Although from a strategic perspective both nations have been galvanized by concerns over China, there are also significant economic benefits to their increasing bilateral cooperation. India and Japan have sought a number of opportunities, through specific programs and broader policy initiatives, to solidify their cooperation and promote stability across the Asia-Pacific.

Considering the diplomatic and political challenges gripping the region, New Delhi and Tokyo’s newfound emphases on cooperating with one another is an intriguing development. Strategic military exercises have become one of the most visible outcomes of their invigorated engagement strategies, and October 2015 marked a milestone in progress on cooperation. The 19th annual Exercise Malabar was significant because, for the first time in eight years, Tokyo participated. The event, conducted in the Indian Ocean and including Indian, Japanese, and United States forces, is expected to become a formalized, trilateral activity with consistent participation from all three. Although none of the three participants claimed the exercise was intended as a means to counter recent Chinese assertiveness in the region, a number of outside observers appeared to reach that conclusion. Most notably, a media outlet with close ties to the Chinese government, the Global Times, released multiple articles criticizing the expansion of the exercise to include Japan. Compounding matters further, on March 2, 2016, Admiral Harry Harris, Commander US Pacific Command, speaking at a security conference in New Delhi, indicated that Exercise Malabar 2016 would be a trilateral event taking place in the northern Philippine Sea. As expected, the Global Times was cautious about the potential implications of the exercise moving into the South China Sea. What ADM Harris did not mention was the possibility of Australia joining the exercise, something which has been discussed frequently by Canberra. Considering the threat Australia perceives from China, their participation would appear to be sensible. The growing attraction of this exercise and the participants’ willingness to explore new venues to conduct activities speak to the budding bilateral and multilateral relationships underpinning Exercise Malabar. From a security vantage point, the potential for India and Japan to cooperate poses real problems for China should conflict emerge.

Beyond joint training exercises, India and Japan appear to be exploring more substantial opportunities for security cooperation. Two immediate areas warrant further attention. First, defense arms sales and research and development partnerships offer the potential for New Delhi and Tokyo to upgrade their capabilities on a compressed timeline. Both parties have made significant efforts to find common ground; however, a number of challenges have placed negotiations on hold. For instance, Indian discussions regarding purchasing a Japanese Soryu-class submarine have been delayed due to Tokyo’s interest in first selling New Delhi approximately a dozen ShinMaywa US-2 amphibious search-and-rescue planes. Unfortunately, a number of complications, including potential technology transfers in India and New Delhi’s infamous bureaucracy, are delaying the airframe sale, thereby stalling the submersible project in turn. Although it is unclear if these stumbling blocks will prevent India and Japan from finalizing these agreements, the delays should not go unmentioned. Regardless, the underlying willingness to explore arms sales and joint programs is a major shift for both parties. Pointedly, in 2014 Japan relaxed its controls on military equipment exports:  These agreements would be among the first in the post-World War II era.

The second major thrust of Indian and Japanese security cooperation lies with their diplomatic engagement. The two states first started making progress with the Strategic Global Partnership in 2006. Since then, Tokyo has embarked upon a number of bilateral development projects with New Delhi that could lead to more ambitious work designed to improve integration. While on the surface these programs are inherently economic in nature, there are security undertones that should not be overlooked. Current and potential projects to improve transit lines and port facilities in a number of India’s more strategically vulnerable regions are a particularly notable development. Building the capabilities that enable expedited troop movements significantly changes the decision calculus for New Delhi. Ultimately, a number of joint economic ventures, if successful, represent not only lucrative financial opportunities, but could buy India and Japan the time necessary to make cooperation possible should regional conflict arise.

From the onset, economic partnership opportunities offer India and Japan mechanisms to cement their engagement. In both the Indian Ocean and India’s northeast, economic cooperation blends with strategic collaboration. First, in the Indian Ocean, a joint venture to build a 15-megawatt diesel power plant on South Andaman Island could be a valuable tool. Developing a mutual interest in India’s continued sovereignty on the islands serves to further deter potential Chinese aggression. The agreement, part of a potentially larger package impacting both the Andaman and Nicobar Islands, marks a significant transformation in New Delhi’s approach to the features in the Indian Ocean. Previously, the government had been unwilling to allow foreign investment on either of the archipelagoe­­s, but with their strategic value – they lie to the northwest of the Strait of Malacca – it would appear that China’s position across the region has led to a precipitous change in India’s calculations. Additional investment opportunities may be in the offing as well. Japan has indicated an interest in financing bridge and port developments that could significantly bolster the archipelagoes’ economic vitality. Second, in northeast India, New Delhi and Tokyo are funding a $744 million road project in the regions of Mizoram, Assam, and Meghalaya. Bringing commerce and other vital needs to the area through improved access will enable India to develop further a region that has long struggled economically. In parallel to the economic advantages of both agreements, these deals are the beginnings of a much improved logistical base for Indian force deployments. Should conflict emerge, these upgrades would provide decision makers in New Delhi and Tokyo with the necessary time to put forward a wider array of response options.

More lucrative economic partnerships could well be in the offing. Most prominent is the Delhi-Mumbai Industrial Corridor. This program alone represents one of the most ambitious and lucrative development projects across the globe today. It includes a $15 billion deal to build a high speed railway, 505 km in length, to link Mumbai with Admedabad, which was agreed upon in December 2015. Japan and India’s bilateral efforts, while perhaps less ostentatious than China’s advances in the region, represent something of a counter to Beijing’s “One Belt, One Road” investment effort. Interestingly, although China is competing on other rail projects in India, it lost to Japan in the recent bidding regarding India’s first high speed line. While China’s program has been highly visible, cooperation between India and Japan appears to be drawing ever closer to Southeast Asia, thereby building a linkage stretching from China’s northeast to its southwest. Furthermore, improving the energy capacity on the Andaman Islands could be an initial step in a far more prosperous and impactful program. In December 2015 India and Japan agreed, in principle, on a civil nuclear agreement to support India. Success in a number of these initial agreements could make broader nuclear cooperation possible.

India and Japan have much to gain from cooperation considering that both seek to emerge as leaders in the Asia-Pacific region. In the globalized economy of the twenty-first century, there are substantial benefits should New Delhi and Tokyo be able to play significant roles in shaping the region. However, establishing their respective positions may well require challenging China’s designs on Asia-Pacific hegemony, so caution is necessary. Consequently, the economic and security arrangements currently being negotiated are vital. Japanese programs in India are particularly significant. They establish clear partnership dynamics between the two states and help New Delhi further entrench itself in potentially vulnerable areas in India. Indeed, establishing specific economic programs in northeast India and the Indian Ocean, in conjunction with defense sales, will be paramount in affording the Modi Administration and its successors the flexibility to maneuver forces if necessary. Invariably, more robust cooperation between New Delhi and Tokyo could fundamentally shift the balance of relationships in the Asia-Pacific, but considerable work remains to be done.

China India Japan 2016-03-31
Davis Florick
Previous: RTE Interview with our Executive Director on Brussels, ISIS and security in Europe
Next: HSC Director’s official report on the history of the Commonwealth Secretaries General